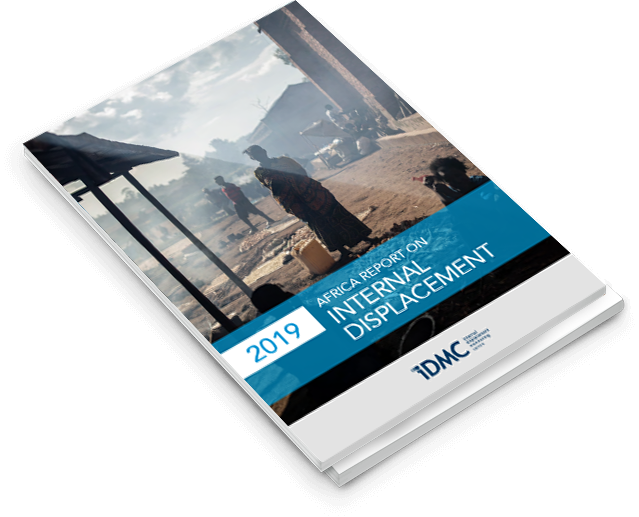 This year’s Africa Report on Internal Displacement represents a timely and relevant contribution to the discussion on internal displacement and its relation to sustainable development in Africa. It provides reliable and up-to-date evidence about the scale of internal displacement in the continent and discusses what is driving it across different contexts.

There were 16.8 million people living in internal displacement as a result of conflict and violence in Africa as of the end of 2018. This is the highest figure ever recorded for the continent, and around 40 per cent of the global total. Disasters, particularly those associated with hydrometeorological hazards such as floods, storms and drought, also triggered 2.6 million new displacements during the year. Conflict and disaster events in 2019 suggest that the number of displacements is likely to continue rising, which shows that the phenomenon is not being reduced.

NEW DISPLACEMENTS BY CONFLICT, VIOLENCE AND DISASTERS IN 2018

Hover over the map to see country data 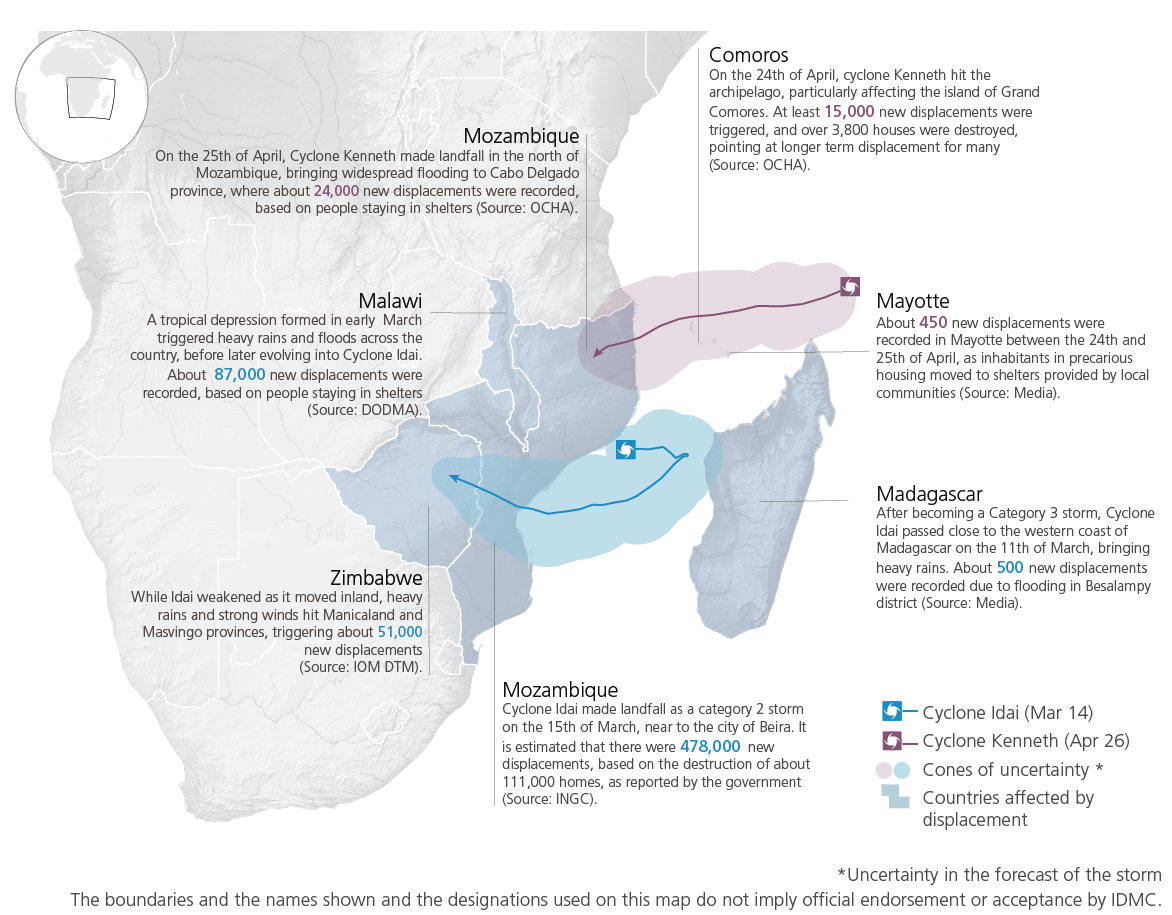 Cyclone Idai triggered Africa’s most devastating disaster of the first half of 2019. The storm originated as a tropical depression in early March, causing severe flooding in northern Mozambique and Malawi before moving back out to sea where it developed into an intense tropical cyclone. It made landfall as cyclone Idai before dawn on 15 March near the city of Beira in Mozambique.

The following month another more intense tropical storm formed off Mozambique. Cyclone Kenneth was the equivalent of a category four hurricane and became the most powerful storm ever to hit Africa. It was also the first time since records began that two major cyclones had hit the region in the same season, and the only known occurrence of a cyclone in the far north of Mozambique.

Displacement associated with conflict and violence in West Africa tends to be linked to Boko Haram’s insurgency in the Lake Chad region. More recently, however, communal clashes have reignited in border areas between central Mali, northern Burkina Faso and south-western Niger, triggering a sharp increase in displacement. More than 140,000 new displacements were recorded in Mali in the first half of 2019, a higher figure than for the whole of 2018. The figure for Burkina Faso was 173,000, the highest ever recorded in the country, and in Niger it was 42,000 or 80 per cent of the figure for the whole of 2018.

The violence and displacement have their roots in the activities of several local but globally oriented jihadist groups. They have spent years exploiting local grievances to lay the groundwork for armed insurgencies that are now wreaking havoc across the three countries. Some of the disputes involve access to land and water, but many attacks are part of efforts to root out individuals linked to extremist groups or to take revenge for previous attacks. 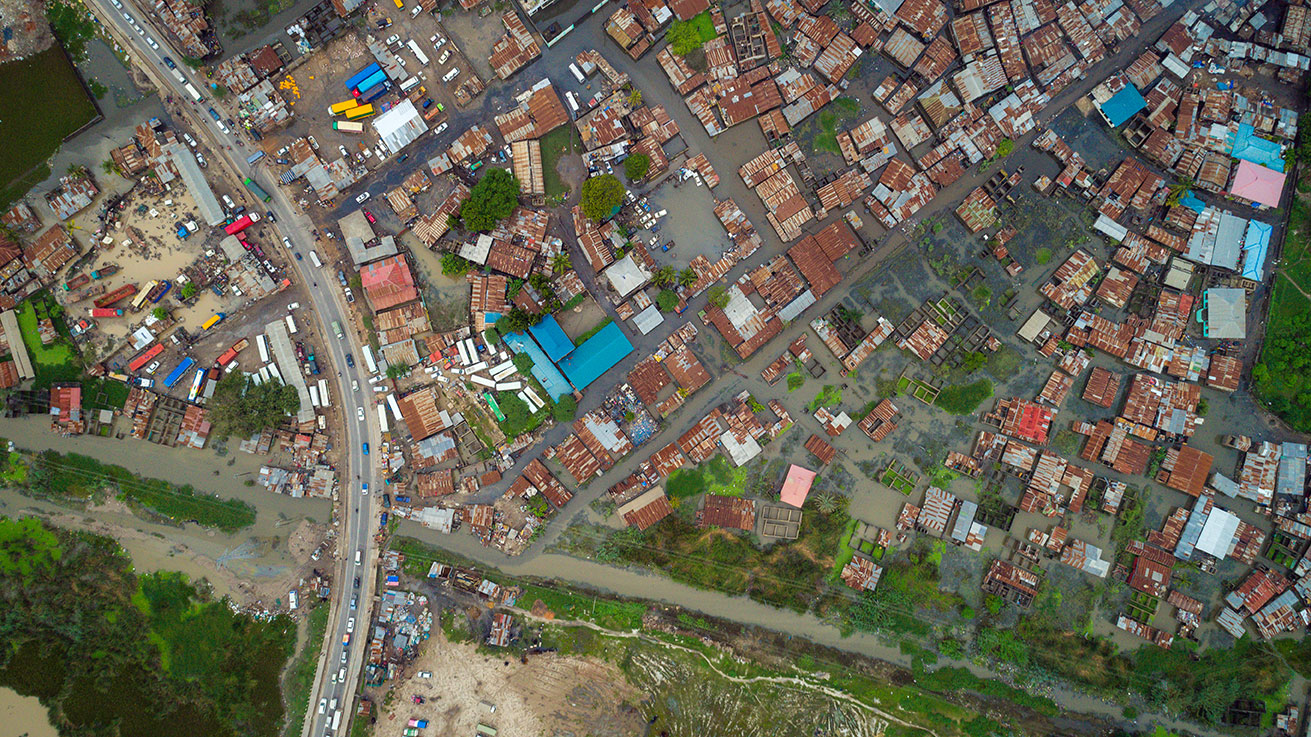 Dar es Salaam is an example of how rapid and unregulated urban growth can increase flood displacement risk and illustrates the challenges that many sub-Saharan cities may face as they grow. Around 70 per cent of its inhabitants live in informal settlements that are particularly vulnerable to flooding because of poor infrastructure and drainage and waste management systems. The city’s population is expected to double to 10.8 million by 2030 and reach 13.4 million by 2035, giving it one of the highest average urban growth rates in the world.