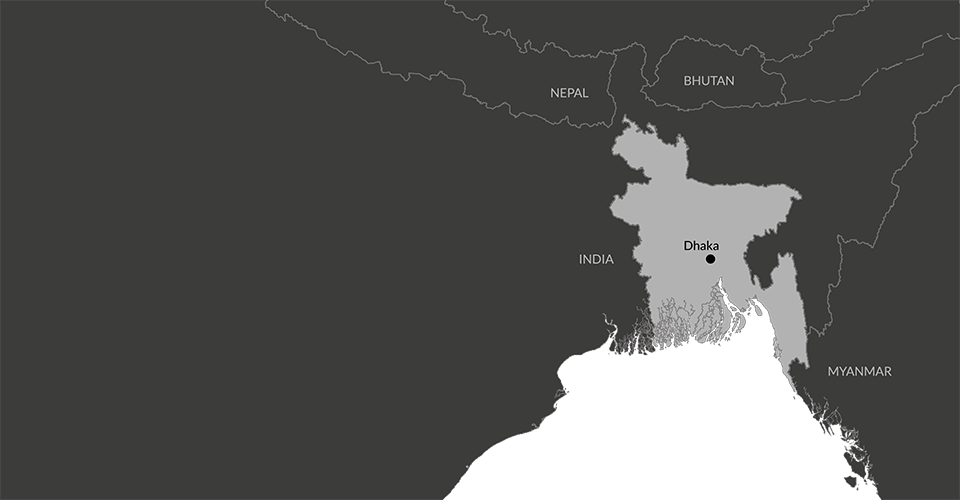 Bangladesh is one of the world’s most disaster-prone countries as a result of its location and population density, which lead to high levels of exposure and vulnerability. Tropical storms regularly flood coastal areas and annual monsoons affect much of the country. These trigger hundreds of thousands of displacements each year, many in the form of life-saving pre-emptive evacuations. This is the result of decades of investment in community-based approaches to disaster risk reduction. The majority of displacements associated with conflict are protracted cases that date back to the partitioning of the sub-continent in 1947 and the country’s independence in 1971.

In the first half of 2020, there were 210 new displacements associated with conflict and violence and 2,520,000 as a result of disasters. Find out more in our Mid-year Update.

The vast majority of displacements in Bangladesh are triggered by sudden-onset meteorological disasters such as floods, tropical storms and landslides. The number of new displacements triggered by conflict and violence is relatively small, but there are hundreds of thousands of people living in protracted displacement, many of them as a result of conflicts associated with the country’s independence in 1971.

Bangladesh is one of the most disaster-prone countries in the world, in part because of its geography. Much of the country is made up of the low-lying Ganges-Brahamputra river delta, which is liable to flooding and empties into the Bay of Bengal, where tropical storms regularly form and inundate coastal areas. The summer monsoon, which occurs roughly between May and September, also affects much of the country every year. These risks are heightened by climate change as sea levels rise, rainfall increases and the usual patterns of tropical storms change at the same time as the Ganges-Brahamputra delta gradually sinks.

Low socioeconomic development is also a major contributor to disaster risk, as is population density. With an average of 1,240 people per square kilometre, Bangladesh is one of the world’s most densely populated countries. The coast in particular is home to millions of people, many of whom live in poor quality housing unable to withstand the impacts of sudden-onset disasters. Slow-onset hazards such as sea level rise and salinisation are also predicted to trigger increasing displacement. Some projections suggest that more than 35 million people in coastal areas will be at risk of displacement by 2050. These factors combine to give Bangladesh the second-highest risk of disaster displacement in South Asia.

Disasters continue to cause significant displacement each year, but they are no longer as lethal as in the past. After a series of devastating cyclones in the last century, including one in 1991 that killed more than 135,000 people, the government began to adopt more coherent approaches to disaster risk reduction and invested heavily in preventative measures such as flood shelters, early warning systems and community engagement. The annual death toll from cyclones has dropped significantly from its height in the 1970s as a result.

The majority of IDPs displaced by conflict have been living in displacement since the 1970s and 80s as a result of territorial disputes that date back to the period after the country’s independence. In the Chittagong Hill Tracts in the south-east, the Jumma community, which is made up of 11 indigenous groups, was displaced by conflict with landless Bengali people who moved into the area as part of a wider government move to change the region’s demographics. The conflict was officially resolved by a 1997 peace accord, but intercommunal violence has continued to trigger regular new displacements. The government passed the Chittagong Hill Tracts (CHT) Land Dispute Resolution Commission Act in 2001 and amended it in 2016 to resolve the ongoing conflicts, but tensions over land have continued.

The Biharis, also known as “stranded Pakistanis”, are an Urdu-speaking minority who moved to present-day Bangladesh after intercommunal violence erupted in Bihar - now a state in India - during the partition of India and Pakistan in 1947. Once in Bangladesh, tensions with the majority-Bengali population arose during the country’s 1971 liberation war, and the Biharis were displaced again, this time internally, to what were intended to be temporary camps. Many, however, have remained in these settings and face discrimination and bureaucratic obstacles in acquiring Bangladeshi citizenship, making their integration into society extremely difficult.

Bangladesh’s 19 coastal districts and those along major river banks are among those with the highest levels of disaster risk. The former are vulnerable to tropical storms and the latter to riverine and flash floods. Families whose livelihoods depend on agriculture and aquaculture are particularly exposed because they live near the coast or rivers and may be displaced several times a year.

Bangladesh, along with China, India and the Philippines, was among the countries to record the largest number of new disaster displacements in 2019, with more than four million. It was also the highest figure for the country since data became available in 2008. Most were in the form of pre-emptive evacuations, which is testament to the government’s efforts in preparedness. It has put effective early warnings systems in place under which local people receive alerts quickly after the country’s meteorological department issues them, allowing them to evacuate and saving many lives.

Cyclone Fani triggered the evacuation of 1.7 million people across several coastal districts in May. Combined with those that took place in India, Fani triggered almost 3.5 million displacements, the highest figure for a single event in 2019. Cyclone Bulbul triggered more than 2.1 million evacuations in November. Most people returned to their homes after the storm had subsided. The number of pre-emptive evacuations organised in India and Bangladesh before the landfalls of Fani and Bulbul was the highest recorded in a single year. Monsoon floods also triggered more than 307,000 displacements in less than three weeks in July.

Few conflict displacements were recorded in 2019. Intercommunal violence against Ahmadi Muslims took place sporadically during the year in Rangpur division, and violence also broke out between political opponents following elections. Clashes between host communities and Rohingya refugees in Cox’s Bazar led to the destruction of shelters in August.

Around 427,000 people were living in displacement as result of conflict and violence as of the end of the year, 275,000 of them in the Bandarban, Khagrachari and Rangamati districts of the Chittagong Hill Tracts. They include both indigenous and Bengali households living in temporary housing after being forced from their homes between the start of the conflict in 1977 and 2007, the last time an in-depth study was conducted. New data is difficult to obtain, but insecurity continues to displace people.

About 151,000 Bihari IDPs are still considered to be living in camp-like conditions across 116 informal urban settlements as of the end of 2019, the largest being Geneva camp in Dhaka, where about 30,000 people live in cramped conditions. Very little information is available about the exact population size of each settlement.

Many agricultural households find themselves unable to absorb repeated economic losses caused by both sudden and slow-onset disasters in the longer term and may move to urban areas such as the capital Dhaka in search of work. The informal settlements they tend to live in carry disaster risks of their own. Others remain in their area of origin where they stay on rented land or with relatives but have little choice other than day labour to support their families.

Bihari IDPs’ living conditions are notoriously poor. Their settlements tend to be overcrowded, and lack sanitation and education facilities. The same is true of Jumma IDPs in the Chittagong Hill Tracts, who are disadvantaged in a range of areas including access to land, adequate housing, health and education.

Collecting comprehensive displacement information in Bangladesh tends to be difficult, because no single humanitarian organisation is dedicated to gathering data on disaster displacement. The Ministry of Disaster Management and Relief collects detailed information, including data on evacuations and arrivals in shelters, but the language barrier makes full use of it challenging. Our estimates are based mainly on data from the Needs Assessment Working Group, an NGO consortium led by Cooperative for Assistance and Relief Everywhere (CARE), for large disasters; and the Network for Information Response and Preparedness Activities on Disaster (NIRAPAD), a non-governmental research organisation that gathers disaster information, for smaller events. Both organisations report data collected by the National Disaster Response Coordination Centre (NDRCC), the government agency that manages data collection on disaster loss and damage.

It is also challenging to collect data on protracted conflict displacement. Cases are not always well known, they are often politically sensitive and the areas where IDPs live tend to be difficult to access. We rely on reports from specialised NGOs such as the Human Development Research Centre for the Chittagong Hill Tracts and the Al-Falah Foundation for the Bihari settlements.

The Bangladeshi government published a national strategy on internal disaster and climate displacement in 2015. It recognises the growing risk of this type of displacement and the fact that being internally displaced infringes on many areas of human rights and sets out a rights-based approach to addressing the phenomenon. It also makes a series of suggestions to protect IDPs’ rights. It addresses prevention efforts in the “pre-displacement” phase, managing displacement and responding to humanitarian needs in the “displacement” phase and resolving it by the achievement of durable solutions in the “post-displacement” phase.

Other policies relevant to internal displacement tend to be in the area of disaster risk reduction and climate change adaptation, because of the significant risks the country faces and to meet the requirements set out in international instruments such as the Sendai framework. One such policy is the National Plan for Disaster Management for 2010-2015, whose successor is still under draft. Another is the Bangladesh Delta Plan 2100, which was formulated with the Dutch government and is intended to map out the land-use planning and disaster management changes needed to meet growing pressures on the delta.

Assessing the severity of displacement

Publication
From island to slum: Bangladesh's quiet displacement crisis
Back from her mission to Bangladesh, IDMC director Alexandra Bilak reflects on the precarious conditions of people living in Cox's Bazar, Bhola island and the slums of Dhaka.
Expert opinion
How many internally displaced Rohingya are trapped inside Myanmar?
It took a massive outflow of Rohingya Muslims for the world’s attention to re-focus on the violenc
Expert opinion
The risk of disaster-induced displacement in South Asia
This technical paper provides evidence-based estimates of the likelihood of disaster-induced displac

Publication
Bangladesh: Minorities increasingly at risk of displacement
Civil war and persecution of religious minorities have displaced hundreds of thousands of people in