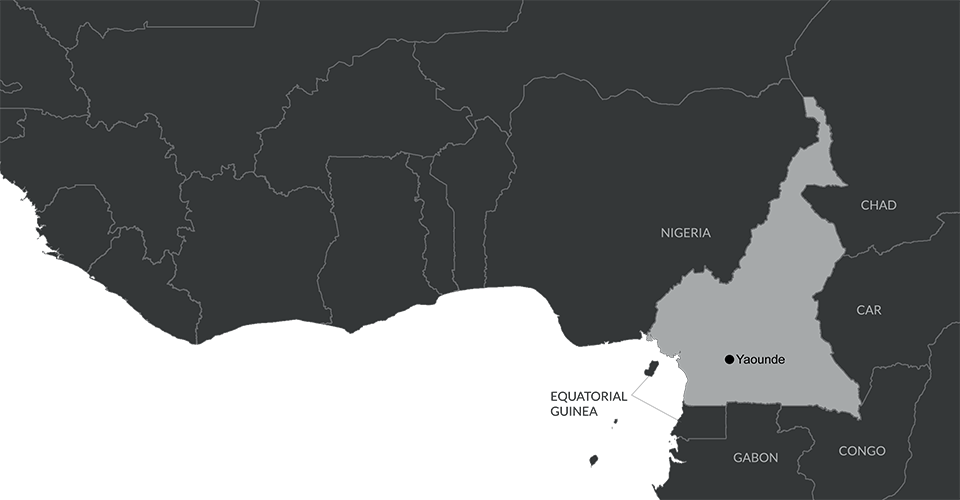 Cameroon hosts the second highest number of internally displaced people (IDPs) in Central Africa, after the Democratic Republic of the Congo. Internal displacement has been growing in the country since 2014 and reached an all-time high of more than a million IDPs in late 2020. The vast majority have fled their homes as a result of the violence in the Northwest and Southwest regions. The rest have been uprooted by violence in the Far North region, located in the Lake Chad basin. Tens of thousands more are displaced each year by floods, landslides, and other sudden-onset disasters.

Cameroon is often described as facing one of the most neglected crises in the world. The country is confronted with significant funding shortages for humanitarian response, which has a huge impact on displaced populations and host communities.

For many years, internal displacement associated with conflict and violence was mostly concentrated in the Far North region, but since late 2016 a rise in violence in the Northwest and Southwest regions has been driving some of the highest numbers of new displacements.

In a predominantly French-speaking country, the longstanding marginalisation of minority English-speaking populations is one of the main drivers of internal displacement in the Northwest and Southwest regions. Violence between non-state armed groups and Cameroonian armed forces escalated in late 2016 and has worsened each year. Education and language lie at the heart of the issue; the Government has continued to enforce French in English-speaking schools and other administrative bodies, despite intense and widespread opposition from English-speaking communities. The education sector has been particularly hard hit; many schools shut down as part of the initial protests, and non-state armed groups have banned them from reopening. So far, the response to the humanitarian crisis has been hampered by limited funding and competing priorities.

Since mid-2020, the violence in the two regions has reached new levels and has increasingly targeted civilians. Most new displacements in 2021 have been reported in these regions, where humanitarian access is rendered near impossible due to the growing insecurity. Families have been forced into pendular displacements, compelled to flee their homes numerous times in the span of just a few weeks.

The other main driver of internal displacement in Cameroon is linked with the decade-long insurgency in the Far North region, located in the Lake Chad basin. Violence has uprooted over 300,000 people as of July 2021. Displacements are often pendular and pre-emptive in nature, with families fleeing their homes numerous times, sometimes every day, in fear of future attacks. In cases where homes have been destroyed by the conflict, entire families and communities are living in a situation of prolonged displacement, with uncertain prospects of returning.

The conflict with Boko Haram and other non-state armed groups has also triggered the rise of vigilante self-defence groups across the Far North region. Furthermore, intercommunal clashes in the Logone Birni district of the Far North region increased in August 2021. Such clashes have resulted in the internal displacement of thousands of people and forced tens of thousands to flee to neighbouring Chad.

Cameroon is also exposed to climatic hazards such as droughts, floods, and landslides. Heavy rains in the Far North region resulted in the relocation of over 111,000 people in July 2020. Seasonal rains in August 2020 in the city of Douala, in Littoral region, also resulted in the displacement of over 4,400 people. These annual rains and floods cause extensive loss of life, damage to houses, crops, livestock, and road infrastructure. These impacts tend to be felt for long periods of time and people can remain displaced for many years as a result.

Displacement associated with conflict in the Far North region tends to be preventive in nature, with populations fearing future attacks and pre-emptively leaving home in search of safety. These displacements tend be short in distance, with more than 80 per cent of IDPs finding refuge within their area of origin. Between August and September 2020, the total number of security incidents linked with attacks by non-state armed groups increased by 130 per cent compared to the same period in 2019. The humanitarian crisis in the Far North region is protracted and has forced hundreds of thousands of people into a situation of internal displacement and extreme poverty.

In 2021, attacks by non-state armed groups continued and accentuated the overall climate of insecurity for populations living in the Far North region. Between March and April 2021, an estimated 171,000 new movements were reported of families fleeing their homes each night to seek shelter in nearby divisions for fear of potential attacks. In addition to the high levels of insecurity, IDPs in the Far North region also face the risk of displacement from recurring annual floods which tend to destroy, or cause significant damage, to makeshift and substandard camps.

The total number of IDPs uprooted by violence in the Northwest and Southwest regions has continuously grown since 2016 and it is now the main driver of displacement in the country. Access remains a significant challenge and IDPs are often left stranded in bushes or makeshift sites with little to no humanitarian assistance. People have been forced to flee within the two English-speaking regions but also to neighbouring Littoral, West, Centre and Adamoua regions.

The security conditions in the Far North, Northwest and Southwest regions have not shown signs of improving or slowing down in 2021. As such, it is expected that more displacement will follow.

Cameroon also continues to experience annual internal displacements linked with seasonal rains and floods, which tend to affect the country between June and October.

The majority of IDPs in Cameroon are accommodated by host communities, while a minority have sought refuge in collective centres such as schools, churches, and spontaneous sites. IDPs living in host communities are particularly vulnerable and often marginalised as they lack strong social ties and the means to build their own shelters. Those staying in collective centres usually only benefit from temporary shelter and are evicted when buildings, especially schools, resume their original functions. Returnees often find their houses dilapidated or destroyed.

Displacement in Cameroon has resulted in food insecurity for many, as they lose access to cultivable land, livestock, and the families’ productive assets. While host families share their limited resources with IDPs and returnees, this is increasing their own vulnerability. In return for the support they receive, IDPs work or provide services for their host families.

In the Far North region, IDPs and host populations lack access to safe drinking water and quality health care and are challenged by epidemics and the consequences of poor harvests which can lead to a rapid deterioration of their nutritional status. Conflict remains one of the main drivers of food insecurity in the Far North, Northwest, and Southwest regions. The insecurity and violence have also undermined people’s livelihoods. The majority of the population depends on agriculture and small-scale trade for a living, and people’s inability to access their land and markets as a result of displacement has led to significant food shortages.

The disruption of social services in many localities in the Far North, Northwest and Southwest regions has forced people to walk long distances to access them, creating additional risks related to arbitrary arrest, and physical and sexual violence.

In addition to COVID-19, IDPs are at risk of other infectious diseases, among them cholera and measles. The accommodation of large numbers of IDPs in certain locations places additional pressure on already strained health structures, which struggle to adequately support new arrivals, exacerbating the risks of disease outbreaks. Health facilities have been at the epicentre of the violence in the Northwest and Southwest regions, often targeted by non-state armed groups. Nearly 30 per cent (269 out of 933) were no longer functional as of August 2020.

In these regions, there is a high prevalence of gender-based violence, especially among displaced women and girls who face a risk of harassment, sexual exploitation and abuse by the host families from which they depend on to meet their basic needs. Displaced women and girls in the Far North have been reported to face similar challenges. For the younger men and boys, loss of employment and increased poverty, often combined with attacks on education facilities, has reinforced their social isolation and has had an invisible impact on their mental wellbeing. There have also been concerns of child recruitment and the use of children and youth by non-state armed groups in the Far North.

Violence and armed attacks have limited access to education for displaced children. In addition to poor safety conditions and long distances to reach schools, poverty, social exclusion, and financial constraints have compounded barriers to obtaining an education in the Northwest, Southwest, Littoral, West and Centre regions. In certain parts, schools are reportedly charging displaced populations higher fees for enrolment.

In the Far North, as a result of protracted displacement, education services are suffering from the additional burden that students from displaced families represent for the host communities. The high incidence of poverty, aggravated by insecurity and displacement affects the availability of teaching and learning materials for the most vulnerable students. Many displaced children also go to school hungry and some faint in schools.

Cameroon does not have policies on internal displacement but started the domestication of the Kampala Convention in 2017. The process is still ongoing in 2021. Cameroon has a National Climate Change Adaptation Plan that refers to internal displacement and includes prevention. It does not include measures for durable solutions or to mitigate impacts on other groups.

In May 2020, planning and funding arrangements for the Presidential Plan for the reconstruction and development of the Northwest and Southwest regions were approved. The two-year project aims to build social cohesion, rebuild damaged or destroyed infrastructure and kick-start the local economy in both regions.

Publication
Out of sight: Cameroon's downward spiral of violence and displacement

Media Centre
Internal displacement in Cameroon - why is the crisis neglected?
Events
Why more data is needed to unveil the true scale of the displacement crises in Burkina Faso and Cameroon
Expert opinion
Assessing the severity of displacement