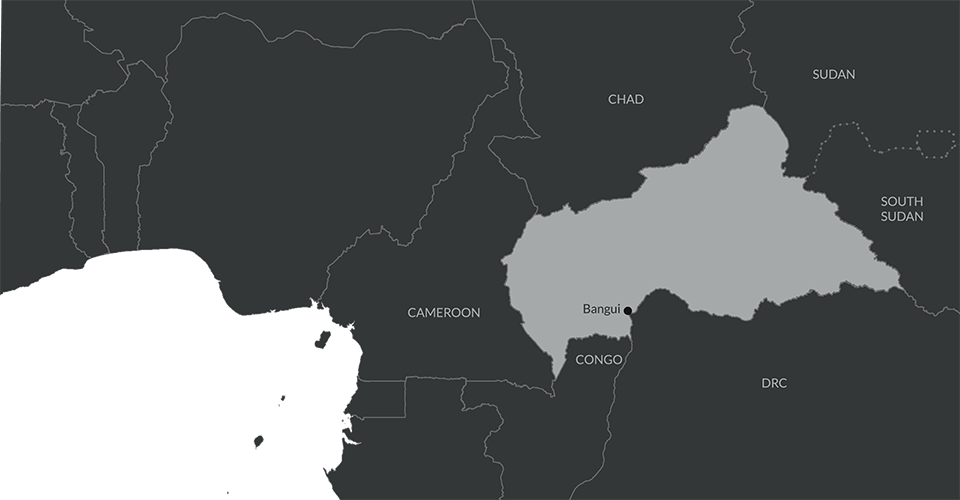 The Central African Republic (CAR) has suffered decades of strife and instability with negative impacts for the country’s development. The last major crisis was sparked in 2013, when a coalition of non-state armed groups known as Séléka took over the capital. The conflict triggered a high number of displacements during the following years and deteriorated further in 2017 and 2018.

In February 2019, the government and 14 non-state armed groups signed the Political Agreement for Peace and Reconciliation in the Central African Republic, the eighth deal of its kind since 2012. Despite several setbacks and disagreements, the implementation of the agreement is progressing, and the number of new conflict displacements fell to 96,000 in 2019.

Between January and August 2020, 1,104 violations of the agreement were noted, a 13 per cent increase from 2019. Moreover, the prospect of the presidential and legislative elections, scheduled for December 2020 and March 2021, led to a further deterioration in the political and security situation in country, especially after the Constitutional Court barred former president Francois Bozizé from running for office again. A new alliance of non-state armed groups, the Coalition of Patriots for Change (CPC), emerged in response and launched attacks across the country, triggering 185,000 new displacements. The violence, which has continued into 2021, constitutes a serious threat to CAR’s peace process, given that several of the groups that make up CPC are signatories to the February 2019 peace deal.

Séléka took over CAR’s capital of Bangui  in March 2013, ousting the country’s president, François Bozizé, and replacing him with its leader, Michael Djotodia. Fighting ensued between the coalition and self-defence militias, the Anti-Balaka, that were formed in response to Séléka’s offensive.

Djotodia disbanded Séléka six months later, nominally integrating some fighters into the army in an attempt to put an end to the conflict. In doing so, however, he effectively lost control over the coalition, which then spread nationwide, splintered and formed new alliances. Armed groups carved up the country, vying for control of mining areas  and trade corridors for gold, diamonds and livestock. By 2015, the government had lost control of most areas outside Bangui.

New elections in March 2016 installed Faustin-Archange Touadera as president and raised hopes that he might be able to stabilise the country. He had campaigned on plans to disarm, demobilise and reintegrate non-state armed groups and promote national reconciliation. Violence escalated, however, in late 2016 and continued in 2017, leading to as many as 539,000 new displacements, a level unseen since the peak of the crisis in 2013.

Following several failed peace initiatives, a peace agreement was signed in February 2019, under African Union auspices. However, the implementation has already faced several setbacks and strains, most recently during the electoral process. The security situation remains fragile, and IDPs’ needs largely unmet. An estimated 682,000 people were internally displaced in the country as of the end of 2020.

CAR suffered its worst flooding in 20 years in 2019, and Bangui was among the places hardest hit. About 102,000 new displacements were recorded across the country, and the floods caused extensive damage to infrastructure and livelihoods. More than 10,000 homes were destroyed, and wells and latrines overflowed. In 2020, 15,000 displacements as a result of floods were recorded.

More than a million people, or 20 per cent of CAR’s population, are displaced, about half as IDPs and half as refugees. Some IDPs are living in protracted displacement and others have been displaced numerous times. Rumours of imminent attacks on villages lead people to flee their homes for neighbouring towns and villages or in some cases displacement camps. Some IDPs are said to seek refuge in the bush.

The February 2019 peace deal has led to a reduction in violence and enabled IDPs and refugees to return. The deal is fragile, but that has not prevented them from trying to re-establish their lives. Even in relatively safe parts of the country, villages often lack basic infrastructure and long-term economic opportunities, which hampers returnees’ efforts to re-start their lives and livelihoods. Housing is a major challenge because many homes have been damaged or destroyed. Others have been occupied, and returnees struggle to reclaim them under the country’s outdated tenure system.

The crisis in the country has impeded farmers’ access to their land and a huge number of crops have been burned or otherwise destroyed in the fighting. This has led to nationwide food insecurity that affects a significant proportion of the population. Supporting the agricultural sector will be key if IDPs are to make progress in their pursuit of durable solutions, especially in a country with 71 per cent of the population living below the poverty line (2018). One in four persons face food insecurity (September 2020).

The crisis has also impacted health care and water and sanitation systems. 70 per cent of health services are provided by humanitarian organizations and more than 2.5 million people, or half the population, lack access to healthcare. Access to water and sanitation is particularly problematic in many IDP sites where 203,000 IDPs live, often in overcrowded makeshift shelters where physical distance is not feasible. In October 2020, 40% of surveyed families in displaced sites  had limited access to clean water, which makes them more vulnerable to endemic diseases.

Despite the difficult security and operational context, alongside the additional challenges related to the COVID19 pandemic, the humanitarian response improved in 2020. Of the 2.8 million people (57 per cent of the total population) who were identified as requiring humanitarian assistance, 50% were assisted, compared to 38% in 2019.

The country ratified the Kampala Convention in 2010 and the Great Lakes Region’s Pact on Security, Stability and Development, including the Protocol on Protection and Assistance to Internally Displaced Persons, in 2007. The country, however, still has yet to develop a national IDP law.

Publication
Unveiling the cost of internal displacement
This report presents our first estimates of the financial impact of major displacement crises in eight countries.