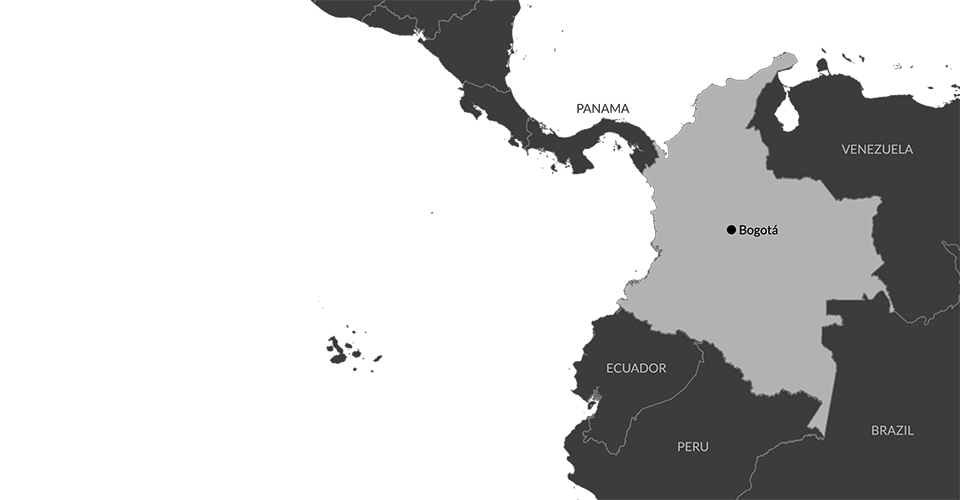 Colombia has faced one of the world’s most acute internal displacement situations from conflict and violence over five decades. The government and the Revolutionary Armed Forces of Colombia (FARC), the country’s largest armed group, signed a peace agreement in 2016. This was a significant development and a prerequisite for achieving durable solutions for the country’s IDPs. Obstacles remain, however, including compensation, land and property restitution, and implementation of other relevant provisions of the peace deal.

Other illegal armed groups remain active despite the peace agreement, and their activities triggered about 106,000 new displacements in 2020.  Clashes between FARC dissidents, the National Liberation Army (ELN) and paramilitaries took place throughout the year in the Pacific coast departments of Chocó, Nariño and Cauca, and in Antioquia and Norte de Santander. The same departments recorded most internal displacement. African-Colombian and indigenous people represented the majority of those newly displaced.

Discontent in rural areas arising from, inter alia, political and territorial marginalisation, corruption, poor governance and the uneven distribution of land and resources  led to the outbreak of armed conflict in Colombia in the mid-1960s. The country’s five-decade conflict has involved government security forces, guerrillas, paramilitary groups and criminal groups. It began mostly in rural areas, but over time spread throughout the country. Non-state armed groups, the largest of which was the Revolutionary Armed Forces of Colombia (FARC), have been particularly active in areas where state presence was weak or absent.

Land issues have been at the heart of the conflict and remain a key factor in sustaining peace. Counterinsurgency operations, fumigation campaigns to eradicate coca plantations, and a failure to provide meaningful economic alternatives, particularly to poor farmers growing coca, have fuelled further conflict and displacement. It is estimated that more than 4.5 million hectares of land have been seized or abandoned during the conflict.

The government and the FARC signed a historic peace agreement in 2016, but the country’s military has struggled to secure areas the demobilised FARC used to control. Other non-state armed groups vying for control of land, illegal mining, drug plantations and trafficking routes have filled the new vacuum, leading to renewed instability.

Fighting between and threats from the National Liberation Army (ELN), FARC dissidents, the Gaitanista Self-Defence Groups (AGC) and other non-state armed groups, triggered most of the 106,000 conflict displacements recorded in 2020. While the figure is a decrease from the 139,000 recorded in 2019, it is a sign that insecurity remains high.

The 2016 peace deal lays out a plan for comprehensive rural reform, including details on land restitution and farmers’ land rights, which could play an important role in addressing the root causes of internal displacement in the country. However, the extent to which its provisions will be successfully implemented remains to be seen.

Colombia also faces a high risk of disaster displacement. The Andean mountain range, which includes active volcanos, covers about a third of the country and seismic risk is high. Cities, including the capital Bogotá, are at high risk of earthquakes, floods and landslides, and poor communities on the Pacific coast are exposed to floods and tsunamis. Rapid and unplanned urbanisation, dense informal settlements in hazard-prone areas and a significant amount of construction in violation of safety regulations have played a role in increasing disaster risk in some towns and cities. Flooding and landslides are common, especially during the rainy seasons.

Sudden-onset events, mainly floods, landslides and earthquakes, displace tens of thousands of people every year. There have also been some outlier events, such as the El Niño phenomenon in 2010, which led to unprecedented flooding and landslides throughout the country and the displacement of three million people. About 64,000 new disaster displacements were recorded in 2020.

All of Colombia’s municipalities have had IDPs flee to or from their jurisdictions. Some IDPs have been confined or endure restricted mobility as a result of hostilities, landmines and other threats. Others who previously fled conflict have been displaced again by disasters.

In some cases, displacement and confinement happens despite the Ombudsman’s Office issuing alerts about imminent attacks, which reveals significant shortfalls in pre-emptive action . It also illustrates the scale of the challenge Colombia continues to face in building stability and peace. The government has limited presence in several areas of the country, something that non-state armed groups have taken advantage of to expand their territorial control. The assassination of social leaders and human rights defenders also continues unabated. There were 297 such killings in 2020, bringing the total since the peace deal was signed to 904.

Internal displacement in Colombia is highly urban. More than 386,000 IDPs were thought to be living in Bogotá, a figure that represents around five per cent of the city’s population. Criminal and gang violence in Colombia’s second city of Medellín is thought to trigger between 5,000 and 15,000 displacements a year. Much of this displacement is intra-urban, as people move from one neighbourhood to another in search of safety. Colombia’s main cities have also been important destinations for IDPs coming from rural areas in search of safety, job opportunities and services.

Violence also continued in Colombia despite Covid-19 restrictions. The government imposed Covid-19 restriction measures that led to a lull in fighting and displacement in some areas, but armed clashes continued in others. The Victims’ Unit registered 23 events of displacement and forced confinement that affected 17,400 people during the lockdown. Non-state armed groups also applied their own movement restrictions in areas under their control, which prevented community organisations and the government from implementing provisions of the 2016 peace agreement.

IDPs continue to face protection concerns, including those associated with armed conflict and widespread violence, lack of access to agricultural and other livelihoods, and lack of formal employment and income-generating opportunities. Progress on land restitution has been slow. African-Colombian and indigenous people are at particularly high risk of displacement because their land is often in resource-rich areas targeted by non-state armed groups.

According to the Victim’s Registy, about 2.2 million people displaced after 1985 had overcome vulnerabilities linked to their displacement in the seven areas it monitors - housing, family reunification, identification, nutrition, health, education and income - as of the end of 2020. Another 752,000 have gained access to housing.  This is encouraging, but it is clear that many challenges to the achievement of durable solutions remain.

This increase over the last decade of the number of people that have overcome their vulnerabilities associated with displacement reflects the high level of government support. Colombia´s Registro Unico de Víctimas is the most comprehensive registry on internal displacement data globally, also compiling information on the current situation of victims of displacement.

During the last two decades, the government has developed and reviewed different laws and policies on the issue and has developed some of the most comprehensive systems to record victims of internal displacement and respond to their needs. The 2011 Victim’s Law integrated the different tools and systems under a single Victim’s Registry and, in 2020, the Congress and the President signed its extension law until 2031.

Colombia also has a sophisticated disaster risk management system that coordinates disaster risk reduction, management, and response, in line with the Sendai Framework for Disaster Risk Reduction. For several decades, the country has managed and retrofitted its national disaster loss database, but accurate figures on disaster displacement are still hard to come by.

Publication
The last refuge - Urban displacement in Colombia
Shorthand
The displacement continuum: the relationship between internal displacement and cross-border movement in seven countries