Democratic Republic of the Congo 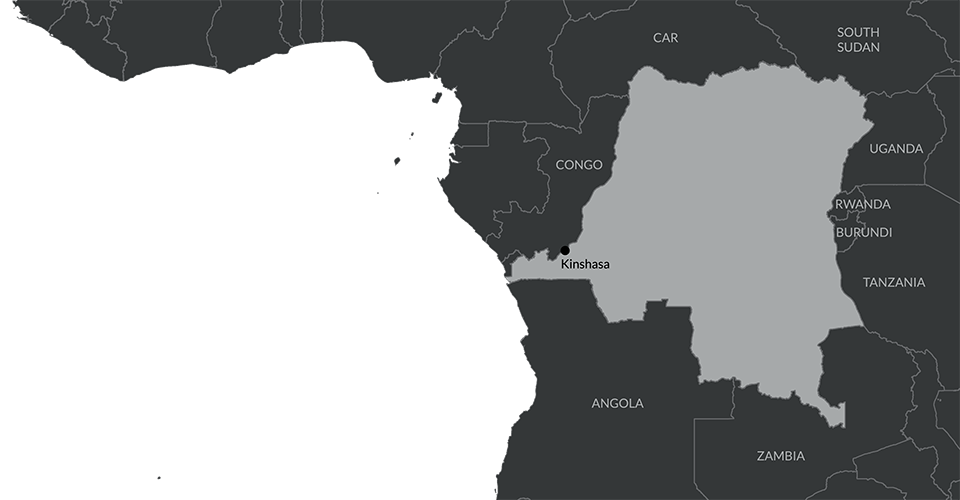 Conflict and violence have been triggering displacement in the Democratic Republic of the Congo (DRC) since the early 1990s. The eastern provinces of North Kivu, South Kivu, and Ituri have been particularly affected in recent years. Chronic instability and the cyclical nature of displacement have left IDPs highly vulnerable and unable to achieve durable solutions.

In 2020, 2.2 million new conflict displacements were recorded, primarily in North Kivu and Ituri, followed by South Kivu, Maniema, Tanganyika, and Kasai Central provinces. Since coming to power in 2019, restoring peace and security, especially in the eastern, conflict-affected provinces has been one of President Tshisekedi’s main priorities.

In addition to putting the conflict in eastern DRC on the agenda of the African Union, the President also declared, effective 6 May 2021 for an initial period of 30 days, a state of emergency (“état de siege”) in North Kivu and Ituri to restore peace and security. Looking ahead, there are hopes that the current momentum to resolve the country’s political crisis may bring about a reduction in conflict, violence, and displacement. A total of 5.2 million people were living as IDPs as a result of conflict by the end of the year, the second highest since 2016.

Political instability in the early 1990s and the Rwandan genocide in 1994 pushed DRC into full-scale civil war in 1996, and by the end of 2000 the country had close to two million IDPs. The establishment of a transitional government in 2003 brought relative peace and stability, allowing many to return. However, many areas have remained unstable, particularly the eastern provinces (Ituri, North Kivu, and South Kivu), where the continued presence of numerous non-state armed groups has resulted in persistent conflict and violence, posing an ongoing threat to the population. These groups have exploited inter-communal disputes and competition over local power and resources, including arable land, minerals, and fishing grounds. Poor governance has further undermined peacebuilding and reconciliation efforts.

In Ituri, violence resurfaced in late 2017, as the Cooperative for the Development of the Congo (CODECO), an association of Lendu militias, multiplied attacks, targeting not only the Hema community, but also the military and other communities such as the Alur in Mahagi territory. Thus far, the Hema have not mounted any systematic reprisals.

In North Kivu, violence started to resurge in 2015-2016 with fighting involving the Armed Forces of the Democratic Republic of the Congo (FARDC) and MONUSCO (Mission de l'Organisation des Nations unies en République démocratique du Congo) against the Democratic Forces for the Liberation of Rwanda (FDLR), the Allied Democratic Forces (ADF), and Mai-Mai (self-defense) militias. Clashes have also occurred among the various non-state armed groups active in the province. Since then, the ADF has continued attacks against civilians and the military, including MONUSCO. In turn, the FARDC has engaged in operations against the ADF and other non-state armed groups, which have resulted in population displacements. In March 2021, the ADF was designated by the U.S. Department of State as a terrorist organization, adding a new dimension to the complex conflict in the region.

In South Kivu, intercommunal violence and armed conflict continued to displace thousands in 2020. Violence in the province is reported to be committed first and foremost by non-state armed groups and local defense militias.

The prevailing conflict and insecurity in the country have undermined the government’s capacity to address poverty, inequality, and environmental degradation that are making people highly vulnerable to a range of natural hazards, particularly volcanic eruptions, earthquakes, and floods. The latter regularly displace large numbers of people, hitting communities already living in poor housing conditions with fragile subsistence livelihoods and limited access to water, energy, and social services.

Ituri, North Kivu, and South Kivu had the most IDPs at the end of 2020, but southern and central provinces such as Kasai, Kasai-Central, Kasai-Oriental, Lomani, Sankuru, and Tanganyika also hosted significant numbers.

Displacement tends to be short but is often repeated as IDPs try to stay close to their areas of origin and maintain access to their livelihoods. The vast majority take refuge with relatives or members of the same ethnic group, and church communities often provide support.  As a result, most IDPs tend to live with host families and only very few live in camps.

Over time, however, shifting frontlines have pushed some IDPs further away from their homes, making their return more difficult and putting them at greater risk of impoverishment and further displacement. Unable to find safety in their own country, others have crossed borders into Angola, Burundi, Rwanda, Tanzania, Uganda, and Zambia. This phenomenon also shows that unresolved internal displacement generates refugee flows, which could destabilise neighbouring host countries.

Around 5.2 million people were living in internal displacement as a result of conflict and violence as of the end of 2020, and around 19.6 million were expected to need humanitarian assistance in 2021.

Local governments and communities that host IDPs struggle to meet the needs of large numbers of additional inhabitants. Local economies collapse as fields, food stocks, and markets are destroyed, making trade and commerce all but impossible to sustain. The consequences are dire. In 2020, food insecurity increased, coinciding with the onset of the Covid-19 pandemic. The total number of people in acute food insecurity increased to over 21.8 million by the end of December 2020, a trend which continued in 2021. Over time the situation also fuels the displacement cycle, as new tensions flare between different communities over scarce resources, disputes for which local customary law may offer only limited guidance.

The country’s overstretched health and education sectors remain in desperate need of support, including the repair and reconstruction of infrastructure. Five epidemics were recorded in 2020 (Covid-19, Ebola, cholera, measles, and malaria), the spread of which was facilitated by poor access to water, sanitation, and hygiene, and low immunization coverage. As of December 2020, 70 health zones affected by displacement in the DRC are also affected by epidemics.

The resurgence of conflict and inter-communal violence mean that IDPs and the broader population also face acute protection needs. Indigenous groups and ethnic minorities are particularly vulnerable, including the Pygmies, who have been uprooted and displaced from their land since the early 2000s. They have little if any access to income-generating opportunities and basic services, and no public voice.

Displaced women are a particularly vulnerable group and often become subject to gender-based violence (GBV). Precarious living conditions as a result of frequent displacement, the pervasive presence of non-state armed groups, lack of government control, and prevailing gender norms contribute to a culture of impunity regarding sexual violence, which is widespread. In 2020, there were 1,053 cases of conflict-related sexual violence documented by MONUSCO.

Displaced children (approximately 3 million in 2020), in particular those separated from their families,  are highly vulnerable, at risk of rape and sexual violence, as well as forced recruitment by non-state armed actors. The government, in partnership with international organizations, has undertaken measures to prevent and end the use of child soldiers such as separation from non-state armed groups, conducting age verification, screening new recruits, and securing written pledges from non-state armed groups’ commanders to renounce child recruitment. Children displaced are also at risk of being out of school, as finding places in schools in host communities is not always possible.

IDPs in camps also face the risk of having to return to places of origin or to other locations due to camp closures, something which has occurred in the past on security grounds (e.g. infiltration of non-state armed groups, banditry) such as in North Kivu, making, in turn, humanitarian efforts more challenging. Other grounds for camp closures have included improved security in the places of origin and ending a culture of dependency.

At the national level, Article 30 of the Constitution (amended in 2006) prohibits the forced displacement of populations. In 2009, DRC further enshrined displaced children’s right to protection in its Child Code (2009).  In 2014, a draft law was put forth on the protection of and assistance to displaced persons, which articulates the restoration of their rights and defines the parameters for all relevant actors in terms of providing assistance to IDPs. The draft law also establishes a national commission for the management and coordination of IDPs. However, the draft law has yet to be finalized and passed. In 2016, a National Strategy for Durable Solutions for Internally Displaced Persons and Returnees was also put forth, which the government has yet to adopt.

At the regional level, the DRC has ratified the Pact on Security, Stability and Development in the Great Lakes Region, which includes the Protocol on the Protection and Assistance to Internally Displaced Persons, and the Protocol on Property Rights of Returning Persons. While the DRC has also signed the Convention for the Protection and Assistance of Internally Displaced Persons in Africa (the Kampala Convention), it has yet to ratify and domesticate it.

Publication
Crises to watch: Internal displacement in 2021
Shorthand
Assessing the severity of displacement

Media Centre
DRC: An acute L3 emergency without the funding to match
NOTE: This is a Spotlight taken from IDMC’s 2018 Global Report on Internal Displacement (GRID).