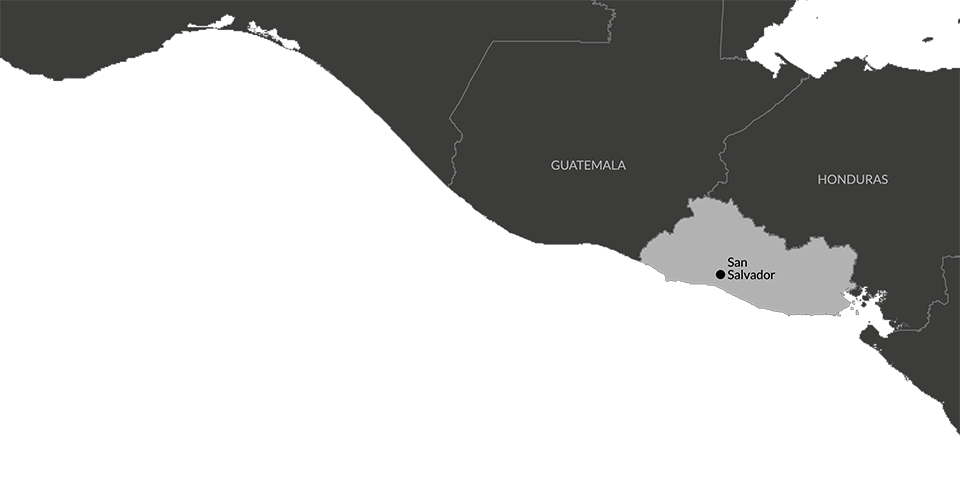 The primary cause of displacement in El Salvador is widespread gang and criminal violence, but accurate and timely evidence of the phenomenon is scant and piecemeal. After decades of ignoring the issue, in early 2020, parliament adopted a law on internal displacement, a landmark policy development in the region. Natural hazards, the most common of which are floods, also cause displacement, but official figures are significantly lower than in neighbouring countries.

Extrapolated results from a survey by the Institute of Public Opinion at the Central American University (IUDOP) suggest there were 454,000 new displacements in 2019. Threats, extortion and assassinations perpetrated by criminal gangs are the main triggers. This considerable increase compared with previous years is in part the result in a change of methodology.

In the first half of 2020, there were 13,000 new displacements as a result of disasters. Find out more in our Mid-year Update.

El Salvador was embroiled in civil war from 1979 to 1992. The Chapultepec Peace Accords put an end to the conflict, but only after entire communities had fled fighting, death squads, massacres and scorched earth campaigns. About a quarter of the country’s population, or about a million people, are thought to have been displaced during the civil war, half of them internally and half abroad. The peace deal was only partially implemented and not enough was done to reintegrate fighters. Nor were social development and poverty alleviation programs prioritised.

El Salvador became one of the most dangerous places in the world in the decades that followed as a result, culminating in a homicide rate of 103 per 100,000 inhabitants in 2015, on a par with many war zones. The rate decreased over the following years and fell by 28 per cent in 2019, when 2,383 murders were recorded. The drop came in the second half of the year, after the country’s new president, Nayib Bukele, began to implement a national security strategy to combat gang violence in July.

A large number of Salvadorans who fled abroad to escape the civil war sought refuge in the US, particularly in disadvantaged neighbourhoods of Los Angeles. Here some joined Mexican gangs, primarily the 18th Street gang, while others formed Mara Salvatrucha (MS-13). US laws introduced after the 1992 LA riots made deportations possible based on minor infractions, and between 1993 and 1999 more than 60,000 nationals from the Northern Triangle of Central America (NTCA) were deported, 35.7 per cent of whom were Salvadorans. 18th Street and MS-13 were effectively exported from the US to El Salvador, Guatemala and Honduras, where they grew and became more organised and violent. The two gangs between them are thought to have around 70,000 members in El Salvador, which has a population of just over six million people.

Gang activity is the main driver of displacement in El Salvador. Violence perpetrated by drug smugglers and cartels is not as common as in other NTCA countries, but they too have caused displacement and some evidence suggests local gangs are increasingly involved in drug trafficking. The underlying causes of crime and violence are the same as those that led to the civil war: poverty, economic inequality, lack of opportunities, social exclusion and unequal access to services.

The state’s repressive response to gang violence, known as its mano dura or iron fist policy has also triggered displacement. Young men living in areas most affected by gang violence have been stigmatised by the security forces and rounded up based solely on their clothing or tattoos. The designation of gangs as terrorist groups has given the government carte blanche to implement repressive security measures and limited the possibility of dialogue. An NGO working with asylum seekers in Mexico reported cases of men aged between 15 and 20 fleeing the security forces even though they were not associated with gangs and had not committed any crime. Death squads affiliated with the security forces have also increased their activities.

More specific triggers of displacement include forced recruitment, extortion, sexual exploitation and abuse, demands for professional services, work-related persecution, general insecurity, the perception of being on a gang’s radar, and gangs’ appropriation of homes for use as lookouts, weapons stores and other illicit activities. Each trigger carries a different level of risk that is assessed individually. People may undertake pre-emptive or preventative displacement when they begin to perceive a risk, as a result of extortion for example, or they might flee in face of the immediate risk involved in witnessing a murder.

El Salvador is also prone to natural hazards. Floods and storms affect the whole region, but they do not cause as many displacements in El Salvador as elsewhere in NTCA. Flooding triggered 390 new displacements in 2017 and 800 in 2018. Nearly 1,900 people were evacuated in response to floods and landslides in early October 2019. The country is also part of Central America’s dry corridor, a region heavily affected by drought that was particularly devastating in 2018. People leave their homes in this region because of food insecurity, but there are no official estimates of how many.

It is difficult to generalise about displacement patterns in El Salvador, because decisions to flee tend to be highly individualised and depend on what is viable for the person in question. The nature of the threat and people’s social capital and economic resources play a role in determining where and how they flee, and whether they will leave alone or with family members. The nature of a safe place is also very specific to each individual case, and the atomised nature of displacement creates particularly complex challenges for those working to protect IDPs.

Nor is internal displacement by any means always sustainable and may not neutralise the threats that force people to flee. This means that many are repeatedly displaced and cross-border flight is also common. Some people know that seeking safety within El Salvador would be futile given the nature of the threats they face, so they flee abroad directly.

Those deported back to El Salvador often find themselves highly vulnerable. The original threat they left to escape may still exist and the state offers little or no support for returnees. There are also documented cases of Salvadorans being murdered upon their return. Unable to re-establish themselves in their place of origin, many effectively return to a life of internal displacement. More than 79,000 Salvadorans were deported from the US and Mexico in 2016 and 2017.

Gang violence is seen primarily as an urban problem, but the government’s mano dura policy has pushed gang activity into previously unaffected rural areas. In some cases, whole rural communities have been displaced when gangs arrive. Those fleeing rural areas often attempt to leave the country directly because they are aware that the violence in urban areas is worse.

Self-containment or forced immobility is a displacement pattern particular to El Salvador and other countries with high levels of gang violence. Those with limited resources or no place to flee to are sometimes forced to confine themselves in their homes, relying on friends and family to help them meet their basic needs.

Many IDPs move from one area affected by poverty, inequality and insecurity to another. The financial losses they suffer from their initial displacement and their inability to re-establish themselves and find work leaves them in particularly precarious conditions, all the more so if their movement is restricted by the presence of gangs. This may also prevent them from accessing services such as healthcare and education. Displaced children rarely go to school, whether because of security or bureaucratic concerns or both. Children need certificates from their previous schools in order to enrol in a new one, a require difficult to fulfil for people fleeing violence. Nor do schools provide safety from gang recruitment, sexual abuse and exploitation because many have been infiltrated. School abandonment is high in areas where violence is prevalent.

The upheaval of displacement and the deprivation and alienation it often entails is also detrimental to people’s mental health and may have a lasting impact. Many IDPs will also have suffered trauma associated with the trigger of their displacement. The may have experienced violence and threats themselves, or witnessed the violent death of a friend or family member. Some IDPs also isolate themselves for security reasons, which in turn raises host communities’ suspicions about newcomers. Communities may also lose key services as people abandon their neighbourhoods, leaving gangs to exert further control which increases insecurity and reduces the state’s presence and its ability to enter certain areas.

The impacts of violence and displacement at the national level are difficult to quantify, but they include a loss of productivity when IDPs are unable to find work, a loss of agricultural output in rural areas, the closing of small and medium-sized businesses because of extortion and lost years of education.

The government adopted a law on internal displacement in early 2020, which raises hopes that some data gaps will be filled. The move followed a constitutional court ruling in July 2018 that officially recognised the phenomenon in the country and instructed the government to develop appropriate legislation. The law provides for a registry of IDPs, which will improve the government’s ability to measure, understand and act to address what is a growing challenge.

The authorities also undertook a profiling exercise on IDPs in 2018 with the support of the Joint IDP Profiling Service (JIPS) and UNHCR to better understand its characteristics and impacts, and the Office of the Human Rights Ombudsman reports on the number of internal displacement cases it receives.

Civil society is also very active. Several organisations have come together to form a roundtable against forced displacement caused by violence and organised crime, which publishes regular reports to provide an evidence base on the widespread nature of the phenomenon.

Painting the full picture: Displacement data gaps in the NTCA

Media Centre
Statement on suspension of aid to Central America