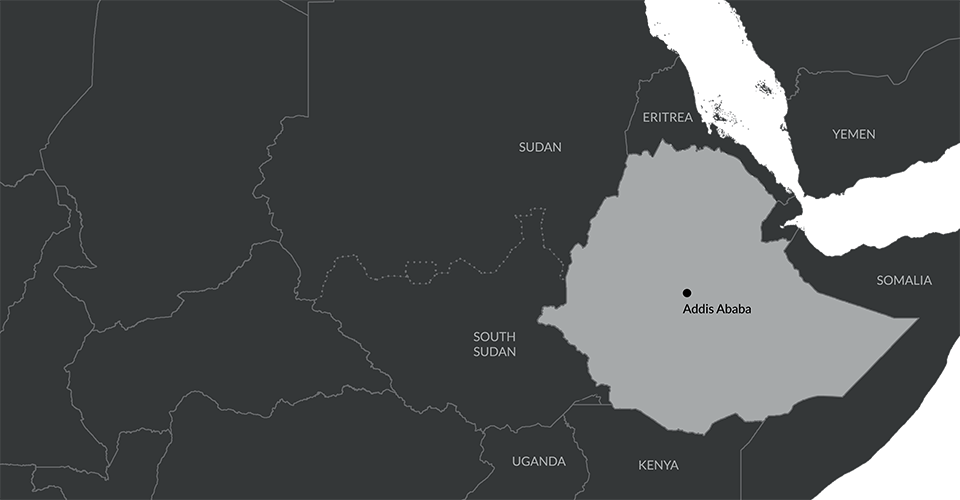 Conflict over land and resources, political and inter-communal violence, and high levels of vulnerability to drought and seasonal floods trigger thousands of new displacements every year in Ethiopia. In 2020, a total of 1,692,000 new displacements associated with conflict and violence were recorded in the country, mostly as a result of escalating tensions in the northern region of Tigray. Disasters, on the other hand, triggered 664,000 displacements, mostly due to floods.

The main drivers of displacement are political violence, disputes over land and resources, inter-communal violence, armed conflict, and disasters. In recent years, significant waves of internal displacement have taken place in Ethiopia. In 2018, almost 2.9 million new conflict displacements were recorded, the largest figure ever for the country and the highest number globally for that year.

The number of new displacements fell significantly to just over a million in 2019. This was the result of the implementation of a three-phase plan launched by the Government in March 2019 to return all IDPs to their places of origin in the following months. Implementation began almost immediately, and 1.2 million IDPs were thought to have returned by the end of the year. Most displacement sites in Gedeo, West Guji and East and West Wollegas were dismantled.

Tensions escalated sharply in September 2020, when the northern region of Tigray held elections in defiance of the federal government, which had postponed them over concerns about the Covid-19 pandemic. The federal government launched a military offensive in early November in response to an attack on its forces. The ensuing violence triggered as many as 539,000 new displacements in addition to reports of human rights violations and abuses, including sexual violence, as well as food insecurity.

Violence also forced people from their homes in the Afar, Amhara, Beninshangul Gumuz and Southern Nations, Nationalities and People’s (SNNP) regions, pushing the number of new displacements to nearly 1.7 million in the country as a whole, a 61 per cent increase on the figure for 2019.

The country has a long history of extreme weather events and is highly prone to disasters, particularly to drought, floods and landslides, that drive food insecurity. Over the past three decades, there have been multiple major drought events, five of which resulted in famines. The drought and famine of 1984 is estimated to have caused around 1 million deaths.

The impacts of Ethiopia’s worst drought in 30 years, which left about ten million people in need of humanitarian assistance in 2015, contributed to fuelling communal tensions and conflict. The seasonal movement of pastoralists has caused conflict over resources, as grazing becomes increasingly scarce. Tensions over access to resources in the Somali region, in particular, have morphed into conflict over resource ownership.

Eighty-five per cent of the country’s workforce depends on agriculture and pastoralism, and weather-related hazards regularly force large numbers of people to leave their homes in search of livelihoods, food, water and pasture for their livestock.

Disasters triggered 664,000 new displacements in 2020, the highest figure recorded in over a decade. The majority were due to the Kiremt seasonal floods, which destroyed thousands of houses, crops and property and contributed to the worst locust infestation seen in the country in years.

A total of 2,060,000 people remained internally displaced by armed conflict and violence and 633,000 remained displaced by disasters as of the end of 2020.

Internal displacement is most pronounced along the borders between regions, the result of land ownership disputes and ethnic and communal clashes. Pastoralists, the demographic group most affected by drought and ensuing resource competition and conflict, travel between regions in search of grazing land. But if their livestock dies because of lack of food and water they often move into displacement camps where they can access aid. Others move to urban centres in search of alternative livelihood opportunities and join the ranks of the urban poor.

IDPs in Ethiopia find themselves in a highly vulnerable humanitarian situation. Among their most pressing needs are livelihoods, access to food, safe water and sanitation and the restoration of adequate living standards. After consecutive periods of drought that have deprived many pastoralists of their livestock and traditional livelihoods, there is a need for income-generating opportunities among IDPs and host communities.

Water and food shortages have also caused malnutrition, and many IDPs are vulnerable to the spread of diseases. Food shortages have been further exacerbated by the security crisis in Northern Ethiopia, which cut humanitarian access to Tigray for several months, and after many people missed farming seasons due to ongoing violence. Many IDPs are also in need of mental health support after suffering from ethnic violence and gender-based violence. Many displaced children’s education has also been disrupted.

Internal displacement is a major challenge for Ethiopia, but there were important political and policy developments intended to address the phenomenon. In 2018, a Ministry of Peace (MoP) was established to tackle the country’s mounting intercommunal violence. It has taken a number of initiatives to address displacement, including the creation of an advisory group on IDPs made up of international organisations and NGOs, and a national steering committee to protect people displaced by conflict between the Somali and Oromia regions. With support from the UN and the international community, the government also launched a durable solutions initiative (DSI) in December 2019. It provides a framework to coordinate efforts to support IDPs in bringing their displacement to a sustainable end, from the policy and legislative to the operational level. The government also organised a series of national consultations that culminated in Ethiopia ratifying the Kampala Convention in February 2020.

The country’s disaster risk management policy adopted in 2013 does not make specific provisions for IDPs. Following the adoption of the Sendai framework in March 2015, the government created a standalone institution, the National Disaster Risk Management Commission (NDRMC), to lead and coordinate disaster risk reduction and management across the country. The commission has also been the focal point for all issues related to people displaced by disasters.

In 2019, the Ministry of Peace and NDRMC adopted and began to implement the Strategic Plan to Address Internal Displacement which includes provisions to ensure IDPs’ safe, dignified and voluntary return as well as a Recovery and Rehabilitation Plan.

Publication
From basic needs to the recovery of livelihoods: Local integration of people displaced by drought in Ethiopia