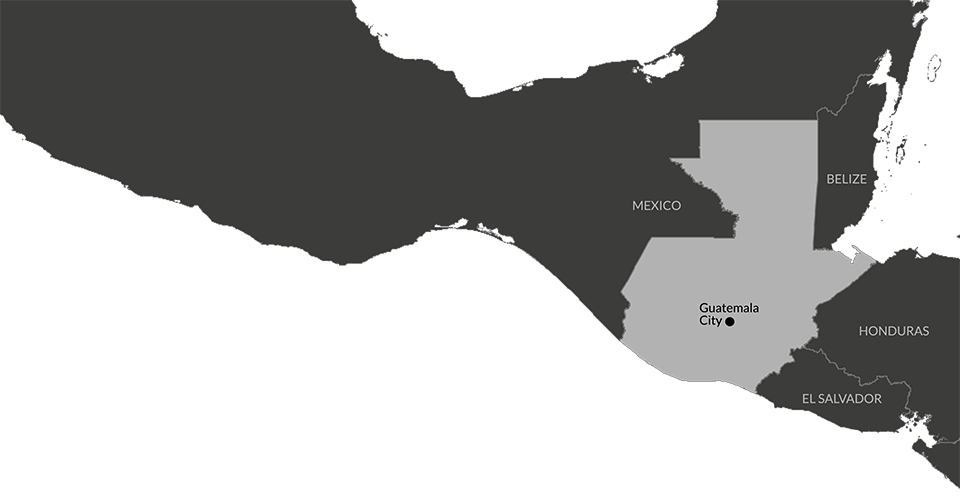 The main triggers of displacement in Guatemala include gang violence and development projects, but no data on the number people involved is available because the government does not formally acknowledge the phenomenon on its territory. There were around 242,000 IDPs in the country as of December 2019, but the figure is based on severely decayed data about people displaced during the country’s civil war. It has not been updated since 1997. Natural hazards also cause displacement every year.

No new displacements associated with violence were recorded for Guatemala in 2019, as in previous years, for lack of data. About 21,000 new disaster displacements were recorded, the majority the result of the rainy and cold seasons.

In the first half of 2020, there were 26,000 new displacements as a result of disasters. Find out more in our Mid-year Update.

The main drivers of displacement in Guatemala are gang violence, development projects and structural violence – the latter being social mechanisms, state institutions and cultural norms and practices that prevent people from meeting their basic needs. Data is scarce, but qualitative evidence suggests that structural violence is the main cause of forced migration in the country. Displacement triggers include evictions, sudden-onset hazards, particularly tropical storms, and targeted violence such as extortion, threats and domestic violence.

Guatemala also has a long history of displacement associated with conflict. The civil war between 1960 and 1996 claimed 200,000 lives and displaced at least a million people, disproportionately affecting the indigenous Maya population and farmers. The exact number of IDPs is unknown because the country’s truth commission did not register all victims of the conflict.

Two decades after the end of the civil war, violence - albeit now associated with gangs, drug trafficking and structural factors – has caused a resurgence in internal displacement. Guatemala’s homicide rate declined from 46.5 to 21.5 per 100,000 inhabitants between 2009 and 2019, but the country still has the highest rates of extortion in the region, and the Mara Salvatrucha (MS13), Barrio 18 and other gangs control large urban areas. Killings, forced recruitment, extortion and the state’s failure to provide effective protection mechanisms create an environment of fear and insecurity that culminates in people fleeing their communities.

Internal displacement associated with criminal violence is not well understood. It is underreported for  fear of reprisals, mistrust of the authorities and the absence of official support for victims of violence.

A recent IDMC case study indicates that, in addition to direct violence, structural violence is also a major driver of displacement in Guatemala. This tends to be categorised as voluntary migration, but the study argues that the line drawn between migration and forced displacement is artificial. It suggests the two concepts are best thought of as lying at opposite ends of a continuum with forced movement at one end and voluntary movement at the other. People forced to leave their homes by this type of violence rarely find themselves in a better situation. Rather they become more vulnerable to direct violence and further displacement.

Structural violence materialises in different ways and relates to a range of vulnerabilities. According to the national survey on living conditions (ENCOVI), 59.3 per cent of Guatemala’s population lived below the poverty line and 23.4 per cent in extreme poverty in 2014. Low incomes coupled with the state’s failure to develop an adequate housing policy have led to the expansion of informal settlements in at-risk urban areas. People find themselves forced to live in unsafe places unsuitable for residential development.

According to the National Coordination for Disaster Reduction of Guatemala (CONRED), as many as 300,000 people live in at-risk settlements in Guatemala City alone. There were thought to be around 250 informal settlements housing 40,000 families in the municipality as of 2013. Urban sprawl combined with Guatemala’s exposure to a range of natural hazards, including volcanic eruptions, earthquakes, drought, tropical storms and landslides, contributes to internal displacement.

The WorldRiskIndex ranks Guatemala eighth in the world in terms of disaster risk. The rainy season displaced almost 40,000 people in more than 2,000 incidents between April and November 2017. The Fuego volcano around 40 kilometres from Guatemala City began erupting in June 2018, affecting more than 1.7 million people indirectly and displacing almost 13,000. It mainly affected Chimaltenango, Sacatepéquez, Escuintla, Mixco and some areas of Guatemala City. The volcano is being monitored and was still active as of December 2019.

People are also displaced as a result of forced evictions. Gangs in Guatemala City and its outskirts force residents to give up their homes, and drug trafficking groups expropriate land in rural areas strategic for cross-border smuggling, if necessary using violence to displace those who represent an obstacle to their ends. There are also instances in which the government is also directly responsible for evictions, primarily of  farmers and indigenous communities.

There is little robust data with which to analyse the triggers, drivers and impacts of internal displacement, cross-border movements or returns in Guatemala, and these gaps need urgently filling. Neither the government nor humanitarian agencies collect or publish information on internal displacement associated with conflict and violence systematically, but evidence shows that violence perpetrated by criminal gangs and unidentified armed groups against land rights and political activists has forced people to flee their homes.

Quiché, Huehuetenango, Chimaltenango and Alta Verapaz were the departments most affected by violence and displacement during Guatemala’s civil war. Eighty per cent of their mainly indigenous residents fled their homes at least temporarily between 1981 and 1982. Internal displacement had been a small-scale phenomenon mainly affecting individuals in the 1960s and 1970s, but it began happening en masse in the 1980s as a result of indiscriminate violence and repression.

People fled throughout the country, the majority finding refuge in informal settlements in the capital or on the south coast. Many IDPs returned to their homes after the war, but there are no accurate estimates of how many people remain displaced. Some experts suggest the figure could have been as high as 250,000 as of 2004, because the government implemented the terms of the peace accords poorly and people were unable to reclaim their land.

According to ENCOVI, 6.8 per cent of the population migrated as a result violence between 2009 and 2014. Displacement triggered by gang violence tends to be small-scale, and many people flee to and between urban centres, where they arrive apparently at random. Some people with strong connections to indigenous communities flee to rural areas. People tend to flee if they receive direct personal threats or to avoid forced recruitment or potential sexual abuse by gangs. Whole families are displaced in cases of non-payment of extortion fees and when gangs claim their homes.

Displacement triggered by drug trafficking groups usually takes place in relatively remote and sparsely-populated areas of the country, often where indigenous communities live. It may be rural-rural or rural-urban in nature. Drug trafficking is most prevalent in western departments that border Mexico, but communities in the north and east of the country have also been forced to sell their land to traffickers. Drug trafficking organisations and gangs fighting for territory to grow palm for oil and control smuggling routes across the country’s northern border displaced at least 1,770 families between 2011 and 2014. Of them, 350, or around 1,400 people, fled their homes in 2014.

Internal displacement is often not resolved, leading to further movements. This is sometimes because the end goal was always to leave the country, but usually it is because displaced people find themselves in precarious and unsustainable situations.

Unlike displacement triggered by violence, that associated with climate-related factors tends to result in large scale and relatively visible population movements. Disasters triggered around 21,000 displacements in 2019.

People displaced to urban areas face discrimination and marginalisation. IDPs from rural areas tend to lack the cultural and technical skills to compete for jobs in cities, which limits their economic prospects. The fact the urban areas are also relatively expensive places live means that many IDPs end up living in informal settlements, where they may not have basic services or adequate housing. Families’ economic hardship may also result in young children being taken out of school to work. Indigenous IDPs who do not speak good if any Spanish face an additional language barrier to finding work.

IDPs’ loss of social networks leaves them more vulnerable to extortion, recruitment into gangs for boys and sexual violence and early parenting for girls. The recruitment of children into gangs is a widespread phenomenon in Central America, where young people are seen as a source of cheap and expendable manpower. Those who join gangs are much more likely to face violent victimisation or death, but those who refuse to join may also face violent reprisals. Communities displaced together by development projects also lose their social cohesion as people trickle away from their resettlement areas because they are unsuitable for re-establishing their livelihoods and achieving durable solutions.

Many people displaced during the civil war have yet to be able to exercise their property restitution rights. IDPs are mentioned specifically in the 1994 resettlement accord, but many have not been recognised as such and are treated as part of the poor with no entitlement to property. This lack of land redistribution, the absence of a functioning titling system and a deteriorating economic situation in poor rural areas fuel social conflicts, land disputes and indigenous poverty. In a country where people depend largely on agriculture for their livelihoods, IDPs’ lack of access to land means that achieving durable solutions is out of reach for many.

One of the accords that ended the civil war, the 1994 Agreement on Resettlement of Population Groups Uprooted by the Armed Conflict, recognises that resettlement is indispensable for a stable and lasting peace and that IDPs should receive special attention given the trauma they suffered. The terms of the agreement were poorly implemented, however, leaving the national poverty alleviation programme to support IDPs and other victims.

The government does not officially recognise internal displacement associated with criminal and structural violence, rendering IDPs as socioeconomic migrants. As such there are no public policies geared toward their protection and assistance. The country was, however, one of nine to sign the 2016 San Jose action statement that pledges better protection for people who flee violence in El Salvador, Guatemala and Honduras, which together make up the Northern Triangle of Central America.

Assessing the severity of displacement

Publication
Statement on suspension of aid to Central America

Media Centre
Understanding and estimating displacement in the Northern Triangle of Central America
Events
Cause or consequence? - Reframing violence and displacement in Guatemala