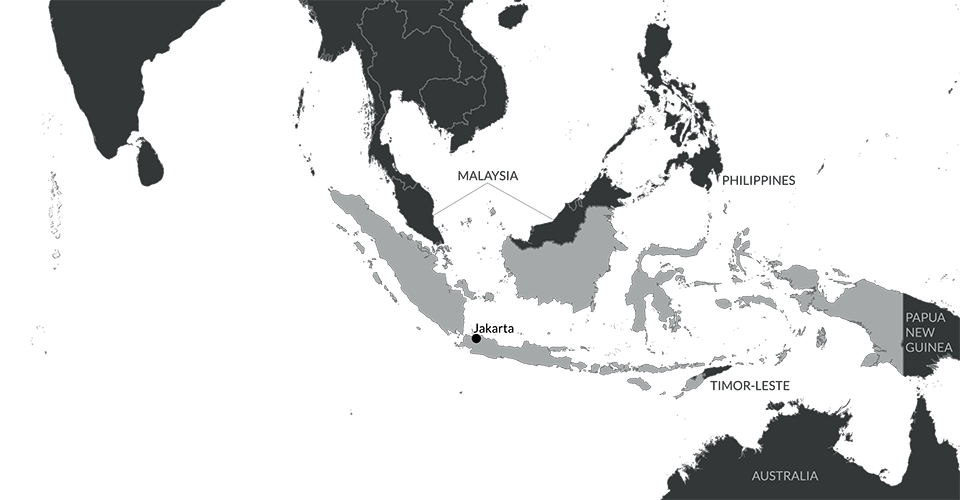 The Indonesian archipelago is highly prone to volcanic eruptions, earthquakes, tsunamis, floods and landslides. Rapid urbanisation is also contributing to increasing population exposure and vulnerability to disasters, that trigger a large number of new displacements every year. Violence and conflict in Papua region also continue to displace people and tens of thousands of IDPs live in protracted displacement as a result of conflict since 1998.

Indonesia is made up of more than 17,000 islands, all prone to disasters. Rapid population growth and urbanization have concentrated millions of people in highly exposed areas, and some communities are more vulnerable to disaster impacts as they have lower coping capacities. These factors combine to give Indonesia some of the highest levels of displacement associated with disasters worldwide. Despite these challenges, the country has good disaster risk management, and most displacement takes place in the form of pre-emptive evacuation of populations at risk that take refuge in government-run shelters and centres.

IDMC's prospective disaster displacement risk model ranks Indonesia eighth in the world for average annual displacement risk. An average of 378,000 people are at risk of being displaced by sudden-onset disasters at any given year in the future. In comparison, our historical data shows that 508,000 people were displaced by sudden-onset hazards each year between 2008 and 2020. Particularly large events included flooding in and around Jakarta in January, which led to almost 56 percent of new displacements due to disasters.

Indonesia's location on the Pacific Ring of Fire and its position at the intersection of three major tectonic plates make the country particularly prone to volcanic eruptions, earthquakes and tsunamis. It also experiences an annual monsoon season, which causes flooding and landslides each year. Hazard maps show that a significant proportion of the population live in areas at high risk of being affected by such hazards. Around five per cent, or more than 11 million people, live in areas prone to earthquakes, and around 2.5 million people are exposed to tsunamis.

After decades of rapid urbanisation, in 2019, nearly 56 per cent of Indonesia's population lived in urban areas, many of which have high exposure to hazards and climate change impacts. This is particularly the case for the capital Jakarta, which is exposed to annual flooding and sea level rise. The coastal city is crisscrossed by 13 rivers that often break their banks during the monsoon season. The growth of informal settlements, rapid changes in land use and the inability of its drainage system to cope have also increased the city's vulnerability to floods. Local authorities have devised a climate action plan and put flood protection measures in place, and there are longer-term plans to move the city to a new location.

Indonesia has also has a history of conflict displacement. Most relates to armed conflict and intercommunal violence in the years after President Suharto's resignation in 1998. Very little information exists on displacement during his time in power, but as many as three million people were thought to have been displaced nationwide between 1998 and 2004. Tensions between different communities fueled violence in Central Sulawesi, Maluku and Central and West Kalimantan, and separatist movements sparked conflict in Aceh, Papua and Timor-Leste.

Violence decreased significantly with the signing of the Maluku II agreement in 2002 and the Aceh peace accord in 2005, and the vast majority of those displaced have returned home. New displacements in recent years have mostly been linked to violence in the Papua region.

People who take refuge in temporary shelters often return home during the day to tend to their land and livestock, as happened in Bali between September and December 2017 when an increase in seismic activity around Mount Agung triggered the evacuation of 150,000 people. Such movements and large number of people who decide to stay with family and friends make it difficult to fully understand where people are and how many may still be displaced.

The majority of people displaced by inter-communal violence and conflict between 1998 and 2004 have returned home, but some are still living in displacement largely as a result of unresolved ethnic and religious tensions and land disputes. Most live in West Timor in Maluku, others in North Sulawesi and West Lombok. People displaced by attacks against religious minorities between 2007 and 2013 have also been unable to return. Displacement associated with conflict in Papua and West Papua tends to take place in remote rural areas where many people fear to return.

Conflict and violence continue to trigger new displacements in Indonesia, but information is limited. More than 4,500 were recorded, mostly in the Papua and West Papua regions. Also, a non-state armed group affiliated to ISIL launched an attack in Sigi Regency in Central Sulawesi in November that triggered an additional 750 displacements.

Depending on the scale of the disaster involved, people are displaced to temporary shelters or evacuation centres may remain there for extended periods with little to no knowledge of when they may be able to return to achieve other durable solutions. People forced to flee after the 2009 Sumatra earthquake still faced delays in obtaining permits for land, continued to be exposed to hazards and lacked livelihood opportunities five years after their displacement. People displaced by the eruption of Mount Sinabung in 2013 faced reconstruction and relocation delays. Given the extensive damage caused by the September 2018 earthquake in Central Sulawesi and ensuing five to six-metre tsunami, it is unclear when the thousands of IDPs who remain displaced will be able to achieve durable solutions.

Displacement also raises issues of housing, land and property rights. The lack of formal tenure makes it difficult for people displaced, be it by conflict or disasters, to reclaim their land and homes upon return if ownership is disputed by other claimants. People displaced between 1998 and 2004 who failed to return also experienced difficulties in finding new land and homes over which they could establish tenure. Many were unable to afford to purchase or register land, and tensions arose between IDPs and their hosts over the issue.

Displacement often involves setbacks in terms of education, livelihoods, housing, infrastructure, security and social life. It also considered to take a toll on people's physical and mental health and emotional wellbeing, though only limited quantitative data exists to support this. For example, around 10,000 evacuees in Bali were reported to be ill with stress and fatigue in October 2017 as a result of the inadequate living conditions in their shelters.

People displaced by violence in Papua and West Papua have struggled with physical insecurity, movement restrictions and lack of access to food, water, shelter, livelihood opportunities and healthcare.

In 2001, Indonesia adopted National Policies on the Handling of Internally Displaced Persons / Refugees in Indonesia. The text addresses displacement associated with conflict and violence and paves the way for durable solutions. It does not, however, contain measures for the prevention of displacement nor on mitigating consequences on other groups.

In 2007, the country adopted the Law Number 24 Concerning Disaster Management, which addresses natural, non-natural and social disasters - including conflict and terrorism. The document defines refugees as "people or groups of people forced to leave their dwelling places for an uncertain time due to negative impact of disaster", which can be interpreted as including IDPs. The text contains preventive measures and promotes durable solutions.

Indonesia and Vanuatu: Displacement for good reason
NOTE: This is a Spotlight taken from IDMC’s 2018 Global Report on Internal Displacement (GRID).

Publication
Indonesia: Concerted efforts needed to find solutions for protracted IDPs
IDMC estimates that as of July 2015 at least 31,400 people are internally displaced as a result of conflict and violence in Indonesia.

Publication
Indonesia: Durable solutions remain elusive for many IDPs while thousands are newly displaced by military operations in Papua