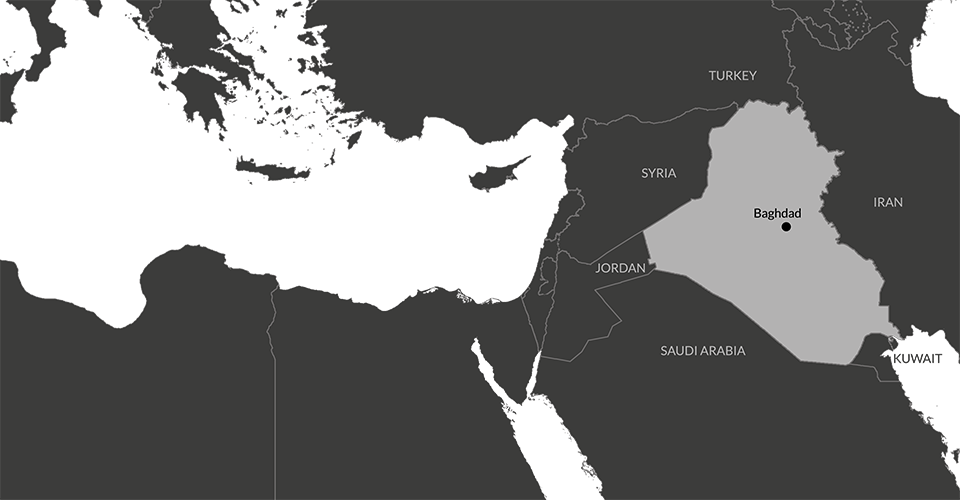 Iraq has a long history of internal displacement, rooted in sectarian and ethnic tensions and fed by decades of authoritarian rule, armed conflict, and, more recently, the war against ISIL. The latest wave of displacement began in late 2012, when ISIL began to take over large swaths of territory, triggering mass displacement during the following years.

Since the official end of the war against the group in December 2017, new displacement has receded, and people have started returning home. Returns have outnumbered new displacements each year since, reflecting government encouragement and people’s resilience. A total of 1,224,000 people remained internally displaced in Iraq as the end of 2020, a 21 per cent decrease compared with 2019.

The country is highly prone to floods, landslides and droughts and is also vulnerable to earthquakes and desertification. In 2020, 1,200 new displacements were triggered by floods, which affected Najaf governorate in January and  Ninewa governorate in March. This figure is likely to be an underestimate, as there is no systematic reporting of disaster displacement in the country.

The main triggers of internal displacement in the country are armed conflict, sectarian violence, and disasters. More recently, as conflict has receded, the closure of IDP camps is leaving many people displaced, as they are not able to return home or find other durable solutions.

In 2010, there were already 2.8 million IDPs across the country, most of them displaced during armed conflict and sectarian violence following the US invasion. The Arab Spring opened a new chapter, marked by unprecedented levels of displacement and one of the world's most acute humanitarian crises. As people took to the streets in February 2011 to demand more democracy and economic opportunity, government forces cracked down, sparking violence that spread quickly across the country. The initial protests were not necessarily sectarian in nature, but as instability increased during 2012 and 2013, sectarian divisions deepened and the Sunni insurgency intensified.

The Islamic State in Iraq, which had stemmed from al-Qaeda in Iraq in 2006, expanded during that period. The group changed its name to Islamic State in Iraq and the Levant (ISIL) in April 2013 and launched attacks that triggered mass displacement. ISIL’s takeover of Falluja in January 2014, its offensive on Mosul in June, and the Sinjar crisis in August, led to Iraq recording more new displacements during the year than at any point in the last decade. As many as 2.2 million IDPs were recorded in 2014, mostly from areas that fell under ISIL control.

The fall of Ramadi in ISIL’s  hands in May 2015 triggered one of the most severe displacement episode, with more than 500,000 people forced from their homes. Large-scale return movements also began in 2015. About 470,000 people went back to their home areas by the end of that year.

In 2017, there was a surge in new displacements to 1.4 million, the highest figure since the beginning of the ISIL insurgency. Most were triggered by offensives against the last ISIL strongholds, especially in the Ninewa governorate. ISIL was officially declared defeated when Mosul was retaken the Iraqi security forces in December 2017. A reduction in hostilities has led to a drop in new displacements, and the number of IDPs at the end of the 2020 fell by 21 per cent compared with 2019. Around 235,000 people returned to their home areas during the year, particularly in the northern governorate of Ninewa but also in Anbar and Salah al-Din.20 They were encouraged by improved security, the clearance of unexploded ordnance and the reconstruction of infrastructure. This reflects concerted efforts by the government and humanitarian and development organisations to support voluntary, safe, dignified and sustainable returns.21

As of 31 December 2020, 1,224,000 people remained internally displaced in the country. The majority of IDPs were displaced from the governorate of Ninewa, followed by the Salah al Din and Anbar governorates. 98% of IDPs in the country have been displaced for three years or more. Many obstacles remain to their achieving durable solutions, which reinforces the need to step up peacebuilding and reconstruction efforts.

While there has been an increase in returns, many IDPs have returned to severely damaged or destroyed houses with only limited access to services, prompted in part by an acceleration in the closure of displacement camps. Many more are still unable to go home for fear of violence and discrimination.22 IDPs have been offered material support to encourage them to return but applying for it is a lengthy and complicated process.23

Learn more about the sources of our figures, as well as our methodologies and caveats. (PDF, 139 KB)

Initiatives to support durable solutions have been put in place, and the total number of IDPs has decreased as many are able to return. However, issues, which still require particular attention. include the closure of camps and Covid-19 mitigation measures, including movement restrictions between governorates and the consequent inhabitability to access livelihoods for IDPs. These measures have led to secondary displacements and are increasing IDPs’ vulnerabilities, as they are facing difficult living conditions in urban and peri-urban areas, with important spill over effects on host communities. There are currently efforts by the Ministry of Planning, under the direction of the Prime Minister, to develop a national durable solutions plan, offering opportunities to address these challenges and work towards solutions.

Humanitarian and development organisations operating in the country have increasingly focused on supporting returns that are voluntary, safe, dignified and sustainable. The government has also made considerable efforts to support IDPs and returnees in recent years. It has sought to achieve returns by focusing on material support, including transport to areas of origin, in-kind assistance in the initial phases of return, and return grants.

It has also offered compensation for damaged property, injuries and deaths caused by ISIL. Gaps remain in the initiative's implementation, however, because applying for and receiving compensation is lengthy and complicated.

An additional important development occurred in October, 2020 when the Government of Iraq and the Kurdistan Regional Government signed an agreement related to the status of Sinjar district in the Ninewa governorate. The aim of the agreement is to restore stability and security in the district, improve and agree upon the administration of the area, as well as prepare for the return of displaced populations to the area.

A decade of displacement in the Middle East and North Africa

Publication
When canals run dry: Displacement triggered by water stress in the south of Iraq

Publication
Is urban reconstruction the key to reducing protracted displacement in the Middle East?
Expert opinion