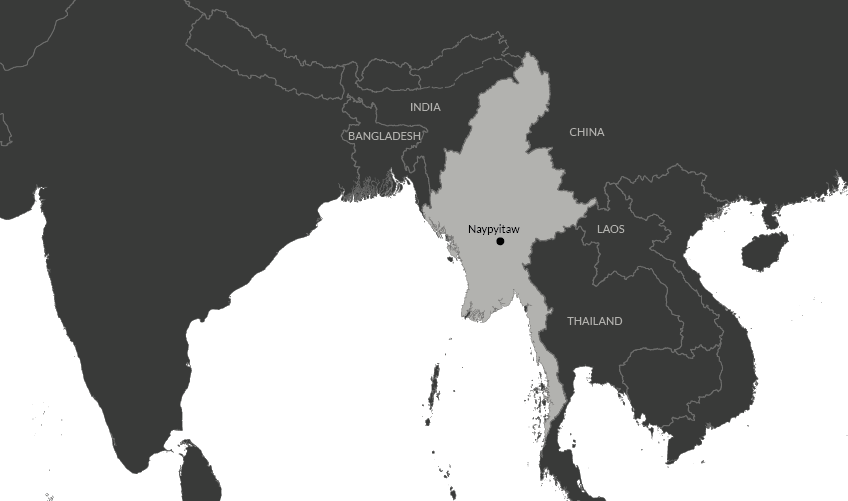 Political and inter-communal conflict trigger large numbers of new displacements in Myanmar on a regular basis. The military has engaged in armed conflict with ethnic non-state armed groups since the country’s independence in 1948. Despite the signing of a nationwide ceasefire in 2015, several ethnic non-state armed groups in Kachin, Shan, Kayin, and Chin states are still in active conflict with the military and regularly trigger displacement. Rakhine state was the scene of mass displacement in 2012 and more recently in 2016 and 2017 when 800,000 members of the Rohingya ethnic group sought refuge in neighbouring Bangladesh.

Disasters also triggered approximately 50,000 displacements. More than 41,000 of these displacements occurred between July and August, a result of floods, landslides, and erosion during the monsoon season.

Armed conflict contributes to most new displacements in the country. The military has been engaged in armed conflict with ethnic non-state armed groups since the country’s independence in 1948. A coup in 1962 led to nearly five decades of military rule. The beginning of a democratic transition in 2011 led to the election victory for the National League for Democracy (NLD) in 2015 in what was considered the country's fairest democratic election in decades.

That same year, the signing of the Nationwide Ceasefire Agreement (NCA) contributed to lowering the conflict intensity and decreasing the number of new displacements, especially in the southeast of the country. However, despite the NCA, several ethnic non-state armed groups, including the Ta’ang National Liberation Army, the Shan State Army in Shan State, and the Arakan Army (AA) in Rakhine State, remain in active conflict with the military. In 2020, conflict between the AA and Myanmar military in Rakhine and Chin states triggered more than 58,000 displacements.

Longstanding religious and ethnic tensions between the Rakhine State's Rohingya minority and Buddhist majority also contributes to  inter-communal violence and displacement, with the most intense occurring in 2012. In the absence of a programme to tackle the deprivation suffered by all of Rakhine’s inhabitants, tensions between the two communities worsened, leading to increased segregation and violence against Rohingya in Rakhine state. Attacks by the insurgent Arakan Rohingya Salvation Army triggered a major military crackdown and attacks against Rohingya civilians in 2016 and 2017, and 800,000 people fled across the border into Bangladesh. There is little reliable data on the Rohingya population still in Rakhine state, but beyond 130,000 that remain in displacement camps since the violence in 2012, few are believed to still be living there.

Following the most recent election in November 2020, the Myanmar military undertook a coup d'état on 1 February 2021. The coup has resulted in widespread protests, an increasingly violent military crackdown, and has put the NCA at risk, reigniting conflict in Kachin, Kayin and Shan States, and Bago region. This has resulted in widespread and increasing displacement, therefore, the context in 2020 is not necessarily indicative of the current displacement situation in Myanmar.

In terms of disasters, the country is vulnerable to a wide range of natural hazards, the most common being widespread flooding and localised landslides. Monsoon floods triggered about 41,000 new displacements in 2020, making up the vast majority of the estimated 50,000 displaced by all disasters during the year. Our disaster displacement risk model suggests that sudden-onset disasters will cause an average of more than 569,000 new displacements a year in the future.

Conflict displacement tends to be temporary, but it also tends to be cyclical with people displaced time and again from the same places. There are also reports from both Rakhine and Shan states of people fleeing their homes pre-emptively because of the arrival of soldiers in their villages due to a fear of violence or forced recruitment from ethnic non-state armed groups, or in some cases, due to evacuation orders from authorities.

Toward the end of 2020, escalations in conflict in Shan and Kayin states as well as Bago region, resulted in an uptick in new displacements not seen in recent years. The situation in Myanmar remains volatile and displacement patterns appear to be shifting, particularly since the beginning of 2021, which has seen a significant upward trend in new displacements and the length of time people are displaced.

Floods often affect already fragile communities that have suffered years of conflict, making them more vulnerable to secondary displacement. This is exacerbated by the fact that many IDP sites are located in flood-prone areas. Particularly during the monsoon season, reports of IDP shelters being damaged or destroyed are common.

Ethnic minorities have been disproportionally affected by the impacts of conflict and related human rights violations. The presence of landmines and unexploded ordnance add to the obstacles IDPs face when they try to return.

As many as 130,000 Rohingya and Kaman IDPs were living in camps in the central part of Rakhine state in 2020 having fled inter-communal violence in 2012 and 2013. Some may have been able to relocate since 2015 but, like other Rohingya, their freedom of movement and access to basic services continues to be restricted because of their lack of legal status and discrimination. Humanitarian needs are significant. Their access to health facilities and hospitals is limited, and segregation and restrictions on freedom of movement significantly impede their livelihood opportunities. The majority of IDPs living in camps are heavily dependent on food assistance. The deterioration in humanitarian access in Rakhine state since 2016 has had a detrimental impact on access to healthcare and basic goods such as food.

Humanitarian access is also difficult in the northern Kachin and Shan states, where a significant proportion of IDPs live in camps in non-government controlled areas. Significant protection concerns in the camps include killings, disappearances, nearby shelling, forced recruitment and gender-based violence.

Another 163,000 IDPs in the southern areas of Shan state, Karen, Karenni and Mon states, and Bago and Tanintharyi regions have received little attention from the international community and have limited access to humanitarian assistance. In recent years, these areas have seen only sporadic displacements. However, an increase since the end of 2020 has led to a deteriorating humanitarian situation. Reports indicate that IDPs in Kayin state and Bago region tend to shelter in the forests surrounding their villages. They lack access to adequate shelter, health facilities, and face protection risks. Artillery shelling often results in damaged crops and fear of violence and repeated displacement restricts access to farmland, disrupting livelihoods and access to food.

The issues of insecure tenure and land rights are prominent in Myanmar. Inaccessibility to lands confiscated by the government or private industry for development projects are also likely to impede IDPs’ return to their areas of origin.

In November 2019, the National Strategy on Resettlement of Internally Displaced Persons (IDPs) and Closure of IDP Camps was adopted by the Myanmar government. This was welcomed by the humanitarian community as an opportunity for dialogue around durable solutions.

In 2020, return initiatives have been announced and sporadic returns reported. However, concerns have been raised regarding the voluntary nature and freedom of movement afforded to returning IDPs, as well as support needed for their resettlement.

Post-coup displacement in Myanmar: What we know, and what we don't
Expert opinion
Unveiling the cost of internal displacement

Publication
"Before you were born, your mother ran": Displacement and disillusion in south-east Myanmar