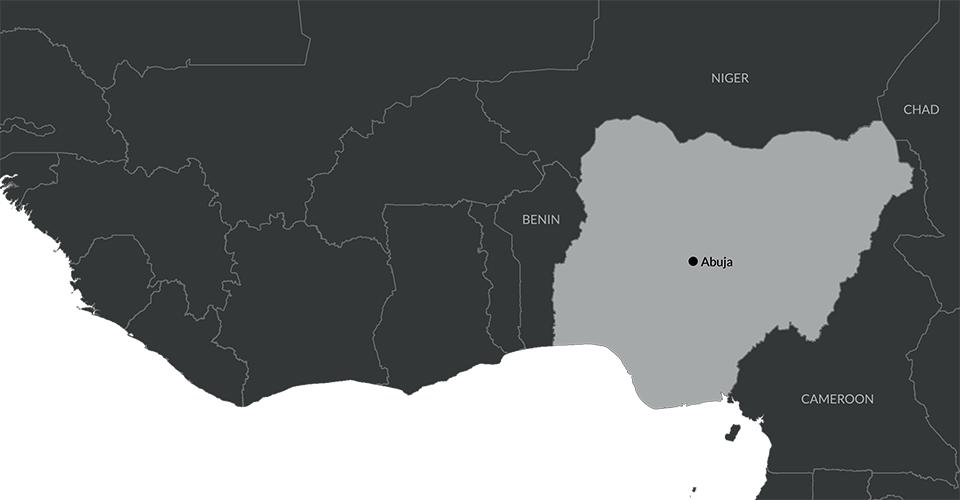 The drivers of displacement in Nigeria are multi-faceted and complex and often overlap. The militant Islamist group Boko Haram has triggered significant displacement in the marginalised north-east of the country since 2014. Competition between pastoralists and farmers has caused tensions in the central region, culminating in significant levels of violence and displacement. Long-standing ethnic conflict between Fulani pastoralists and Hausa farmers in north-western Katsina, Sokoto and Zamfara states also triggers displacement. Flooding displaces thousands of people every year.

Conflict and violence led to 248,000 new displacements across 19 states in 2019. The ongoing insurgency in the north-east triggered 105,000, criminal violence in the north-west and north central states 88,000, and communal violence in the central region 55,000. About 2.6 million people were living in displacement as of the end of the year. Flooding affected most of the country in 2019 and triggered most of the 157,000 new displacements recorded.

In the first half of 2020, there were 32,000 new displacements associated with conflict and violence and 8,800 as a result of disasters. Find out more in our Mid-year Update.

The drivers of displacement in Nigeria are multi-faceted and complex and often overlap. Livelihoods and access to water and grazing have been under strain for decades in the marginalised north-east of the country, as the surface area of  Lake Chad has shrunk by 90 per cent over the last 45 years. The shrinkage is the result of  climate change and anthropogenic factors including the damming of tributaries, unsustainable water management policies and overgrazing.

People have increasingly migrated south along the perimeter of the Lake Chad basin as a result, which over time has caused around 70 ethnic groups to converge, contributing to an increase in competition, tensions and conflict over resources. This combination of political, social, economic and environmental factors has created fertile ground for the emergence of militant armed groups such as, not limited to, Boko Haram.

Founded in 2002, the group has launched increasingly dramatic attacks since mid-2014, leading to an unprecedented displacement crisis in north-eastern Nigeria and the wider Lake Chad basin. Its indiscriminate attacks against civilians, including bombings, mass shootings, suicide attacks, kidnappings and the destruction of property, have prompted millions of people to flee  both within Nigeria and across borders to neighbouring Niger, Cameroon and Chad.

Boko Haram has also extended its activities to these countries, causing further displacement there too. This is thought in part to be the result of militants as well as civilians fleeing Nigeria to escape the military’s counterinsurgency operations, which have led to accusations of extra-judicial killings, torture and the destruction of property.

Despite the Nigerian government’s claims that Boko Haram is near defeat, attacks and conflict continued unabated in 2019, triggering 105,000 new displacements. The insurgency continues to be one of the biggest drivers of displacement in Nigeria.

International attention tends to focus on Boko Haram’s brutality, but intercommunal clashes fuelled by ethnic and religious tensions also flare regularly throughout the country. Long-standing ethnic conflict between Fulani pastoralists and Hausa farmers in north-western Katsina, Sokoto and Zamfara states triggered new displacements in 2019 as it took on new dynamics in the form of rural banditry and criminal violence. Around 178,000 people were living in internal displacement across the three states as of the end of the year.

Violence in the central region is triggered by myriad factors, including ethno-religious disputes, crime, cattle rustling, land disputes and tensions between pastoralists and farmers. Clashes between farmers and herders have escalated in recent years, and triggered 53,000 new displacements in 2019. The figure, however, should be considered an underestimate. The growing and shifting patterns of violence in both areas require better monitoring to ascertain the true scale of displacement.

Nigeria is also highly exposed to  natural hazards and is affected by a number of disasters that trigger displacement each year. The most common are floods that occur in lowlands and river basins where people live in densely-populated informal settlements. These are caused not only by rainfall and overflowing watercourses, but also as a result of water being released from dam reservoirs both in Nigeria and upstream countries.

Adamawa and Borno states, which have long been affected by conflict, bore the brunt of flooding in 2019 during an exceptionally long rainy season. Floods in the Niger river basin also destroyed 2,667 homes in Niger state in August and September. Disasters triggered around 157,000 new displacements across the country as whole and were thought to have left about 143,000 people living in internal displacement as of the end of the year.

People internally displaced by Boko Haram in the north-east are spread across 13 states, the vast majority in Borno, Adamawa and Yobe where active conflict is still ongoing. Borno alone accounted for 1.5 million of the 2.6 million IDPs recorded in Nigeria at the end of 2019. Displacement camps do exist, but the majority of IDPs in all affected states stay with family, friends or in host communities. Despite military efforts to combat Boko Haram, the states hosting IDPs remain unstable, living conditions are difficult and basic services few and far between.

At the same time, large numbers of people who fled into neighbouring Cameroon, Chad and Niger have  returned to their areas of origin  as resources in their places of refuge have dwindled. After many years of Nigerians fleeing across the border into Cameroon, a tripartite agreement was signed in March 2017 between the governments of Nigeria and Cameroon and the UN Refugee Agency (UNHCR) to facilitate the return of refugees.

Our partners recorded the return of 90,000 IDPs in 2019, but information about their conditions suggests their progress toward durable solutions has only been partial. Given the ongoing insecurity, the level of destruction and lack of basic services in the north-east, conditions that support voluntary, safe and dignified returns are not yet in place.

IDPs’ main concerns relate to food, health and shelter. The disruption of agriculture, markets and trade routes caused by violence and the presence of unexploded ordnance has contributed to widespread food insecurity in Borno, Adamawa and Yobe states states, where around 2.7 million people are food insecure and many depend on humanitarian assistance to meet their basic food needs. Around 1.4 million IDPs were in need of health assistance as of the beginning of 2019, and a similar number needed shelter support. Cholera outbreaks are common and cases of malaria have increased in areas with inadequate shelters and water, sanitation and hygiene facilities. About 800,000 people in Borno live in areas inaccessible to humanitarian workers.

Protection needs are also high. Boko Haram attacks on displacement camps and retaliatory assaults on areas under military control mean that  IDPs' protection space is minimal. They have also faced violent intimidation by government forces. Around 1.8 million IDPs are in need of protection support. This includes psychological services for people who have suffered trauma and abuse during the conflict, such as the thousands of survivors of abductions, forced recruitment and sexual violence.

IDPs’ arrival often puts additional strain on host communities’ already scarce resources, and the latter may struggle to accommodate the influx of more mouths to feed. Host community members tend not to receive equal humanitarian assistance, which jeopardises IDPs’ security and may trigger new and secondary displacement as competition and tensions over resources boil over.

The data landscape in Nigeria is complex for many reasons, including lack of access, rapidly evolving population movements and the political nature of displacement.

Our data on displacement associated with violence in the north-east, north-central and north-west comes primarily from the International Organization for Migration (IOM)’s monthly displacement tracking matrix (DTM) and emergency tracking tool reports. This information is complemented by media monitoring to collect information on new displacements in states not covered by IOM DTM.

It has also become increasingly difficult to link armed attacks directly with new displacement flows, because the nature of the attacks has changed. There have been fewer raids on homes and villages, which can easily be seen to have triggered displacement, and more suicide bombings and other attacks in markets and other public places. While it is clear that insecurity has increased, it is more difficult to determine that people have left their homes for precisely that reason, which is likely to lead to our underestimating the number of new displacements. Disaster displacement data is collated by Nigeria’s national emergency management system (NEMA), but given the lack of organisations focused on collecting it on the ground, our figures are likely to be underestimates. We complement and triangulate this information with media monitoring.

Since signing and ratifying the African Union Convention for the Protection and Assistance of Internally Displaced Persons in Africa, also known as the Kampala Convention, Nigeria has developed a national policy on IDPs that would enshrine the protections granted by the convention into domestic law and facilitate a coordinated response to IDPs' needs. The policy, however, is still under discussion in the lower house of parliament.

The UN Development Programme (UNDP) and UNHCR have collaborated with the government in efforts to implement a joint protection, return and recovery strategy for the north-east. The strategy builds on other national and international policy instruments including the government’s 2016 Buhari Plan. UNHCR coordinated the development of a return strategy for Borno state in 2018, which is intended to set minimum conditions for IDPs’ safe, dignified, informed and voluntary return.

Nigeria published its national disaster management framework in 2010, and a national emergency management system (NEMA) was established as a result. It has also produced a first and second national communication under the UN Framework Convention on Climate Change (UNFCCC), which outline the country’s adaptation strategies.

The government established the Federal Ministry of Humanitarian Affairs, Disaster Management and Social Development in August 2019, an important step intended to improve the coordination and mobilisation of resources to prevent and respond to humanitarian and displacement crises.

Publication
Displaced and isolated: the realities of COVID19 for internally displaced people in Lagos, Nigeria
Expert opinion
Assessing the severity of displacement