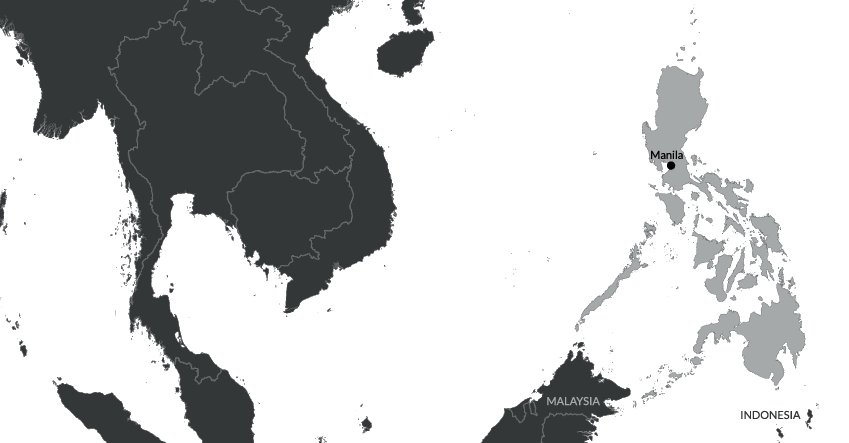 The Philippines is located on the Pacific Ring of Fire and is one of the most seismic countries in the world. Earthquakes and volcanic activity are common and trigger a high number of displacements. The country is also located in East Asia's typhoon belt, making it highly prone to tropical cyclones, storms and floods which displace millions of people every year.

About 4.4 million new disaster displacements were recorded in the Philippines in 2020, the second highest figure after China. A large proportion of these were pre-emptive evacuations. For example, the eruption of the Taal volcano in early 2021 led to nearly 506,000 evacuations and was the largest displacement event triggered by a geophysical hazard globally in 2020.

In addition to disasters, the country's southern region of Mindanao is affected by conflict and instability that have left thousands of people living in protracted displacement over decades. About 111,000 new displacements associated with conflict and violence were recorded in the country in 2020, the majority in Mindanao.

Poverty  and rapid and unregulated urbanisation in hazard-prone areas are major drivers of disaster displacement risk in the Philippines. The archipelago is highly exposed to recurrent hydro-meteorological and geophysical hazards, including storms, floods, landslides, earthquakes, tsunamis, volcanic eruptions and drought. It experiences an average of 20 tropical storms a year, mainly between June and September, of which an average of five are destructive. Floods take place primarily during the South-West monsoon season from June to October and during the North-East monsoon season from November to March.

An annual average of 3.6 million disaster displacements were recorded between 2011 and 2020, the majority triggered by typhoons and the storm surges, floods and high winds that accompany them. The largest single displacement event in recent years was caused by typhoon Haiyan, known locally as Yolanda. The typhoon, which struck in November 2013, was the equivalent of a category five hurricane which displaced more than four million people.

Typhoons Vamco, Goni and Molave in October and November of 2020 triggered more than three million new displacements, almost 80 per cent of all the displacements in the country. The eruption of the Taal volcano in January and the resulting impacts triggered 506,000 new displacements.

The conflict shifted to Marawi, the capital of Mindanao, in May 2017. Clashes between the military and the Maute group, allegedly supported by the elements of ASG and BIFF, displaced more than 350,000 people in the city and surrounding region. The conflict officially ended in October 2017, but three years later around 126,000 people are still displaced as large parts of the city are severely damaged or destroyed.

The ending of martial law in the beginning of 2020 corresponded with a rise in violence, which continued across Mindanao throughout 2020. Almost 111,000 new displacements were recorded during the year. The majority were in Mindanao, where the military, the New People's Army (NPA) and ASG, clashed several times. Most of the fighting took place in North Cotabato. Outside Mindanao, other displacement events were reported in Central, Eastern and Western Visayas as well as Mimaropa. Around 153,000 people were still living in displacement at the end of 2020.

Pendular and multiple displacements due to disasters have become common in some areas of the Philippines. Many people first move to evacuation centres or take refuge with host families, travelling frequently between their places of shelter and their former homes as they start to rebuild and recover their livelihoods. Others leave affected areas to seek refuge and access to basic services and livelihoods in other regions.

IDPs living in prolonged displacement and unable to return are often relocated to transitional shelters so that they can meet their medium-term housing needs. This was the case for about 115,000 people whose homes were destroyed as a result of the earthquake in Davao del Sur in December 2019.

In 2018, the city of Marawi was the scene of intense clashes between the Filipino army and non-state armed groups. Between 80 and 90 per cent of the population was displaced during this urban battle. The city's roads were choked with traffic during the first three days of the battle as residents attempted to get out. Some of them did so on foot. As many as 70 per cent of those displaced, or more than 270,000 people, were thought to have returned as of the end of 2018. However, the damage and destruction of entire neighbourhoods left many in conditions of protracted displacement.

The  major challenges IDPs face, particularly those displaced for extended periods, include securing safe, durable housing, access to basic services such as education, and generating income despite the lack of livelihood opportunities in the area of displacement.

These challenges were clearly demonstrated a year after the earthquake in Davao del Sur, where thousands of IDPs were still living in transitional shelters with limited access to basic services, protection and safety. While displaced individuals are still struggling to get back to normalcy, the Covid-19 crisis has exacerbated their situation. As a result of local lockdowns, displaced communities experience movement restrictions, but without proper protective mechanisms in place in their camps.

The same applies to IDPs displaced by conflict. They face obstacles, including government restrictions on their return to areas deemed unsafe, exclusion from permanent housing assistance and limited alternative settlement options. Relocation to transitional sites has been criticised for being coercive and failing to adhere to international standards.

Learn more about the sources of our figures, as well as our methodologies and caveats. (PDF, 176 KB)

The Philippines have put disaster displacement high on their political agendas by developing and implementing disaster risk management laws and policies. Pre-emptive evacuations carried out by national and local authorities are among the measures which, while they cause displacement, save lives and reduce the impacts of disasters.

The Philippines also provides a particularly good example of strong government ownership of displacement data. The Disaster Response Operations Monitoring and Information Centre (DROMIC) is one of the most reliable national systems in Asia for data on displacement associated with both disasters and conflict. The country can be considered an exception in that the amount of conflict displacement data recorded in national accounting systems tends to be much smaller.

DROMIC publishes regular situation reports that include overall figures for conflict and disaster displacement, and disaggregates its information by geography, cumulative flows and time-stamped stock. For larger or more complicated events, it issues daily reports. Given the numerous islands and regions that make up the Philippines, it works with its field offices to monitor and collect information.

Media Centre
Philippines: Solutions still a distant prospect in Marawi, one year on

Publication
Unveiling the cost of internal displacement
This report presents our first estimates of the financial impact of major displacement crises in eight countries.