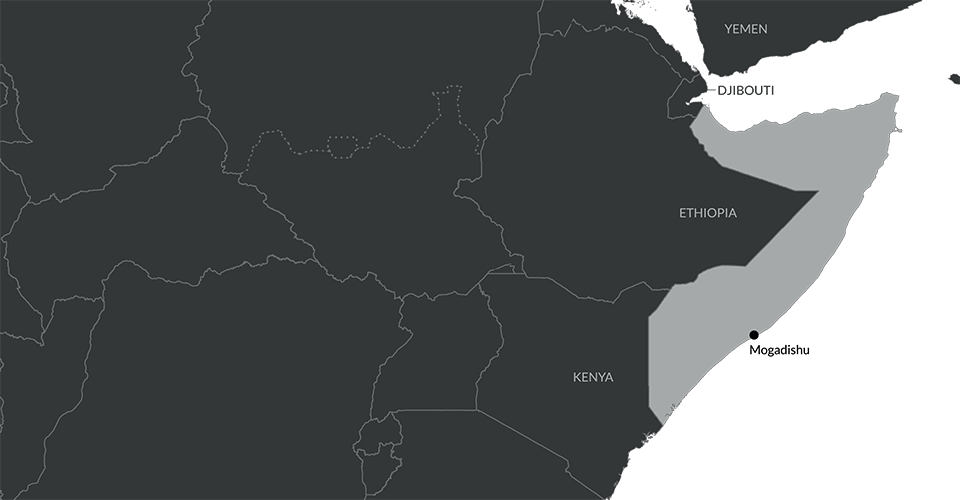 Conflict and violence, slow and sudden-onset disasters and food insecurity have all played a significant part in driving displacement in Somalia. Conflict and violence triggered 293,000 new displacements in 2020, as Al-Shabaab intensified its attacks in Somalia last year, alone triggering 136,000 new displacements. The escalation was in part an effort to thwart planned elections and in part to expand its territorial control, as  Ethiopian and US troops withdrew from the country. Tensions between the federal government and federal member states over the holding of federal presidential and parliamentary elections also escalated throughout the year. These evolved into full-blown conflict in Jubaland in February, triggering 56,000 new displacements.  The latest deadline on 8 February 2021, when the president’s term expired, was missed.

Thousands of farmers were also forced to move in search of assistance when locusts destroyed their crops. On top of locusts, floods had a widespread impact, and triggered 979,000 new displacements in 2020. Urban as well as rural areas were affected, and many people already displaced were forced to move again. More than 81,000 IDPs fled sites around Bay and Mogadishu in April, and tens of thousands left Belet Weyne city in Hiraan when the Shabelle river broke its banks. Covid-19 also influenced displacement patterns as IDPs avoided sites hosting people from different areas for fear of overcrowding and infection. Movement restrictions due to ongoing insecurity impeded humanitarians’ access to many displaced communities. The combined impacts from floods, locusts and the pandemic meant humanitarian funding available to respond to these overlapping crises was insufficient.

New and protracted displacement in Somalia has many interlinked drivers, including recurrent and persistent exposure to conflict and climate-related hazards, chronic and acute food and livelihood insecurity, and human rights violations and abuses. Half of the population lives below the poverty line. Domestic revenue is insufficient for the government to deliver basic services, and the country is still dependent on international assistance. More than a third of the population, or 5.9 million people, are in need of humanitarian assistance.

Following the collapse of Mohamed Siad Barre’s authoritarian socialist government in January 1991, Somalia descended into cycles of clan-based internal conflict and displacement that has fragmented the country for almost three decades. An internationally-backed federal government was set up in 2012 and signed a compact agreed with the international community to set priorities for governance and peacebuilding.

Fighting between non-state armed groups in particular al-Shabaab, and the Somali armed forces regularly takes place. Large-scale displacement has repeatedly been driven by people’s need for safe shelter, a lack of secure tenure in places of settlement and the search for food, water and pasture for livestock. In addition to violence, al-Shabaab’s imposition of taxes on households, farms and livestock has also forced people to move.

The cumulative impacts of severe and recurrent drought and other natural hazards on food and livelihood security have led to two periods of famine in some areas of the country, the first from 1991 to 1992 and the second in 2011. More recently we estimate that drought has triggered 1.2 million new displacements since 2017, a figure that illustrates the scale of the challenge in the country. Severe drought has also been followed by floods in recent years, and these have increased people’s vulnerability, eroded their livelihoods and displaced hundreds of thousands. In 2020 alone, floods triggered 979,000 new displacements.

Displacement patterns are determined by recurring shocks associated with conflict, natural hazards and human rights violations. They are also influenced by livelihood mobility needs - around half of the population are nomadic pastoralists - rapid urbanisation and access to information and external assistance.

The majority of IDPs settle in informal and unplanned settlements where conditions are very poor and forced eviction is a common threat. The newly displaced join those whose displacement has become protracted, and many are displaced more than once. IDPs are often marginalised and discriminated against, particularly if they belong to a minority or are separated from the protection of their clans.

Displacement tends to be urban in nature, including rural to urban movements, intra-urban displacement when IDPs are evicted and move to another part of a city and inter-urban, when they move between cities. As many as 80 per cent of IDPs recorded in 2019 were living in urban centres.

Their settlements transform over time into urban informal settlements such as the one in Hargeisa, the capital of Somaliland, where 14 of such settlements are home to economic migrants and IDPs, mainly from parts of the region affected by drought and conflict, as well as returnees and refugees. IDPs in Puntland are also concentrated in the region’s main cities. Many come from southern and central Somalia, though some have been displaced more locally by drought.

Large-scale drought displacement began in late 2016, as food security and access to basic services began to deteriorate in affected areas. The central area of rural eastern Somaliland had become largely deserted by late November of the same year. Displacements have continued since, and 60,000 were recorded in 2019.

In common with other countries in East Africa, Somalia was affected by widespread flooding in the second half of 2019 during an unusually wet rainy season influenced by El Niño. Around 407,000 new displacements were recorded, about a quarter of them in Belet Weyn city in Hiraan state.

Conflict and violence in Somalia triggered 188,000 new displacements in 2019, mainly in the south-east where al-Shabaab, which is affiliated to al-Qaeda, has its stronghold. More than half were recorded in Lower Shabelle region as a result of clashes between the group and the Somali army supported by African Union forces.

Persistent insecurity in rural areas impeded the provision of humanitarian aid, leading many people to flee to overcrowded camps in urban areas, mainly in Mogadishu, in search of refuge and assistance.1 Tens of thousands of IDPs returned home during the year, but many only temporarily to work their land during the sowing and harvest seasons.

IDPs are the most vulnerable population group in Somalia and are affected by food insecurity, violence and disasters. Many are in acute need of humanitarian assistance and protection, including access to food, water and sanitation, life-saving health services, shelter and education. Women and girls are particularly vulnerable to gender-based violence and discrimination.

Displacement in Somalia has been largely protracted and the achievement of durable solutions will require robust, strategic and collective approaches, whether IDPs choose to return, integrate locally or settle elsewhere. Even in areas of origin where conflict has subsided, IDPs report not wanting to return out of fear of reprisal or because of the lack of social services and livelihood opportunities.

Sustainable solutions will require security in terms of human-made and natural hazards, climate-resilient livelihoods and secure tenure. Most forced evictions of IDPs take place without warning, and alternative land or housing is rarely provided, pushing those affected toward peripheral districts where establishing a livelihood is even more challenging.

In response to the new and protracted displacement across the country, the government launched a durable solutions initiative (DSI) with UN support in 2016. In 2019, it established an inter-ministerial durable solutions secretariat, ratified the Kampala Convention and approved a national policy on IDPs and returning refugees. The DSI has been a significant catalyst, leading the government to fully own the country’s response to internal displacement, and setting an example for others to follow.

Learn more about the sources of our figures, as well as our methodologies and caveats. (PDF, 142 KB)