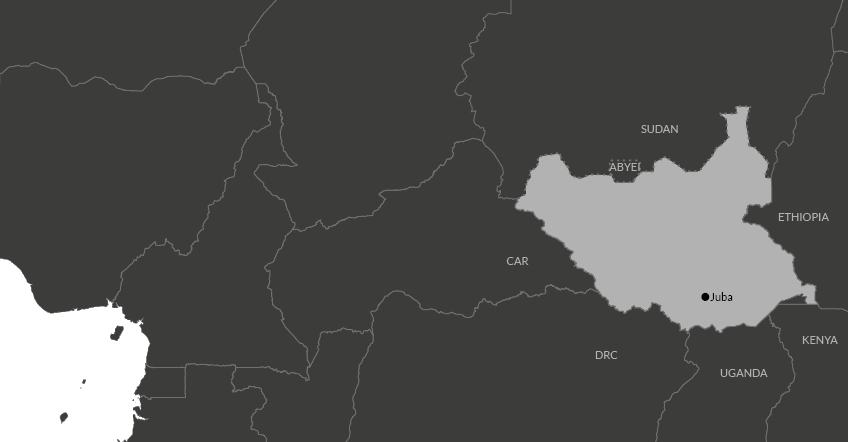 South Sudan may be the world’s youngest country, but it has a long history of conflict and underdevelopment that predates its independence in 2011. The many causes of displacement make for complex dynamics that frequently overlap. Some of the main drivers are the civil war that began in 2013, inter-communal violence and recurrent natural hazards such as floods and drought.

Almost 259,000 new conflict displacements were recorded in 2019. The two main parties to the conflict signed a peace deal in September 2018 and  political violence has since decreased , but ethnic violence persists. About 1.3 million people were living in displacement as a result of conflict and violence at the end of the year. Floods triggered about 294,000 new displacements in 2019.

In the first half of 2020, there were 232,000 new displacements associated with conflict and violence and 23,000 as a result of disasters. Find out more in our Mid-year Update.

South Sudan seceded peacefully from Sudan in July 2011 after 25 years of civil war. Decades of turmoil meant the new country’s leadership inherited extremely low levels of development and a rural majority that relied on subsistence agriculture. Malnourishment was commonplace and more than half the population were living in absolute poverty.

A political crisis was sparked in December 2013 when the country’s president, Salva Kiir, accused the former vice-president Riek Machar of attempting a coup. Violence followed in the capital Juba between rival ethnic and political contingents of the armed forces, causing a rift within the ruling party, the Sudan People’s Liberation Movement (SPLM). This led Machar to form the Sudan People’s Liberation Movement in Opposition (SPLM-IO). The conflict reopened unresolved political and ethnic grievances, the result in part of the Sudanese government’s counter-insurgency strategy during Sudan’s second civil war.

A peace agreement was signed in August 2015, but it failed to put an end to the fighting. In fact the conflict escalated in 2016 and spread beyond the Greater Upper Nile region. With the appointment of Taban Deng as first vice-president and the opposition’s representative in the transnational government of national unity, SPLM-IO split into two factions, one loyal to Machar and the other to Deng. Fighting intensified in the latter part of the year in areas previously relatively free of conflict, including the Greater Equatoria region. As of December 2017, one in three people in South Sudan had been forced to flee their homes since the outbreak of hostilities.

The fighting and indiscriminate violence against civilians has also led to widespread food insecurity, which in turn has triggered many displacements. The spread of the conflict to the Equatorias, which are known as South Sudan's breadbasket, has aggravated the situation further. Together with drought and flooding, the violent disruption of farming and the collapsing economy prevent people from accessing livelihoods.

Although famine status was lifted in June 2017, half of the country’s population was estimated to be facing acute food insecurity in January 2018. By February 2019, this number had risen by 13%, to include about 7 million people. With other livelihood opportunities undermined, livestock takes on added importance as a source of capital, which increases the likelihood of violent cattle raids.

This reliance on livestock and increasingly scarce resources in turn aggravate localised conflicts over water and pasture, an indication of the extent to which the causes of internal displacement in South Sudan are intertwined.

The signing of a revitalised peace agreement between the government and a number of armed groups in September 2018 has led to a reduction in conflict and violence. The number of associated new displacements also fell from 321,000 in 2018 to 259,000 in 2019, but there were still 1.3 million people living in internal displacement as of the end of the year. Implementation of agreement has been slow and there was an increase in violence and displacement in the second half of 2019, but the formation of a unity government in February 2020 has rekindled hopes of lasting peace.

Displacement in South Sudan is widespread, and all states have been affected by the current crisis, however Greater Upper Nile has the largest numbers of IDPs, with about 60 per cent of all IDPs living in there. Since 2015, Greater Upper Nile has been the centre of conflict and in 2018 conflict continues unabated there. Large-scale fighting in Central and Southern Unity and inter-communal clashes in Eastern Jonglei and South Eastern Upper Nile continue to force people to flee to less populated areas and away from basic services. By the end of 2018, there were about 1.9 IDPs living across the country.

Population movements are difficult to track, however, particularly because many IDPs hide in remote areas. The fluidity and pendular nature of displacement also makes it difficult for humanitarian agencies to determine the number of returning IDPs, and no reliable estimates exist for 2017 or 2018. Nor is there a system in place to monitor returns systematically. The UN Refugee Agency (UNHCR) facilitated the relocation and return of IDPs staying in UN civilian protection (PoC) sites in late 2017 and early 2018, but their number was negligible compared with the overall displaced population in the sites.

Almost 203,000 IDPs were living in PoC sites in five different locations as of March 2018. Many are overcrowded and access to safe water and sanitation facilities is inadequate, increasing the likelihood of waterborne and communicable diseases. Armed groups have also launched deadly attacks on some PoC sites, often in connection with ongoing disputes inside and outside them. This happened during violence in Malakal in February 2016 and in Juba four months later. Wildfires also spread quickly through the sites and frequently leave IDPs homeless.

The majority of IDPs in South Sudan, however, live outside camps. Many live alongside the PoC sites, or in churches or small villages isolated from the fighting. IDPs in areas more exposed to violence often hide in swampland or the bush, where they are forced to survive on water lilies and wild fruit, heightening the risk of malnourishment.

The combination of conflict, economic crisis and inadequate access to food and livelihoods has eroded vulnerable households’ ability to cope, leaving many IDPs living in protracted displacement with little prospect of achieving durable solutions. The recurring nature of the main displacement triggers and the fact way that the intensity of conflict tends to vary with the seasons also means that many people have been displaced a number of times.

Porous borders and a lack of coordination between the countries concerned have also enabled circular cross-border displacement, in which people move back and forth between South Sudan and neighbouring countries when they are unable to find safety, food or other basic necessities.

Seasonal flooding also wipes out crops and livestock, reducing the ability of thousands of households to provide for themselves. Torrential rain caused riverine flooding in Pibor and surrounding villages in 2017, triggering nearly 72,000 displacements between August and October. Flooding in 2018 caused far fewer displacements.

The floods of 2019, however, were described as the worst in the country’s history. South Sudan was the most affected country along the White Nile basin, and flooding triggered 98 per cent of the 294,000 new disaster displacements recorded in 2019. They also left around 245,500 people still living in displacement as of the end of the year.

Comprehensive information on displacement associated with flooding is not available, but people’s heightened vulnerability and the fact that new population movements are reported in the same areas each year point to some repeated and protracted displacement.

The displacement situation in South Sudan is both a cause and effect of a protection crisis that extends beyond the material need for shelter, water, food and other essential items. IDPs, the majority of whom are children, are also vulnerable to killings and abuse. The number of children associated to armed groups is estimated to be 19,000. Displaced boys and young men are particularly at risk of being killed, because they are expected to take part in community defence groups, flagging them up as potential recruits or targets for rival militias. Displaced women and girls are highly exposed to sexual violence, including when they pass checkpoints or leave collective shelters to gather food or firewood.

Humanitarian organisations have noted high levels of psychosocial stress among IDPs as a result of their traumatic experiences, confinement in protection sites, family separation and the persistent threat of attack. There was an increase in suicide rates among youth males living in protection sites. Despite this, there continues to be a severe lack in qualified mental health professionals in the country.

Hunger is an equally pressing concern. Food insecurity and acute malnutrition verging on famine have reached unprecedented levels. Negative and in some cases irreversible coping measures such as reducing meals, going without food, selling assets to buy food and consuming seed stock meant for the next planting season have been observed have been observed throughout the country.

Our estimates for new displacements and the number of IDPs at the end of the year are based on data from IOM’s displacement tracking matrix (DTM) mobility assessments and event tracking. We also use OCHA reports, compiled monthly from figures collected by its field offices, REACH, UNHCR, the protection cluster and the Relief and Rehabilitation Commission (RRC).

The methodologies that OCHA and its partners use include key informant interviews, household surveys, biometric registration, headcounts, focus group discussions and the use of housing destruction as a proxy for displacement. Figures from partners are based on countrywide data, but the scale of displacement and the fact that it takes place over such large areas make it challenging for a relatively small number of agencies to verify the accuracy of all estimates.

Humanitarian access restrictions are also an issue. The fluidity of displacement and the fact that many people are displaced more than once also makes it difficult to produce comprehensive new displacement estimates.