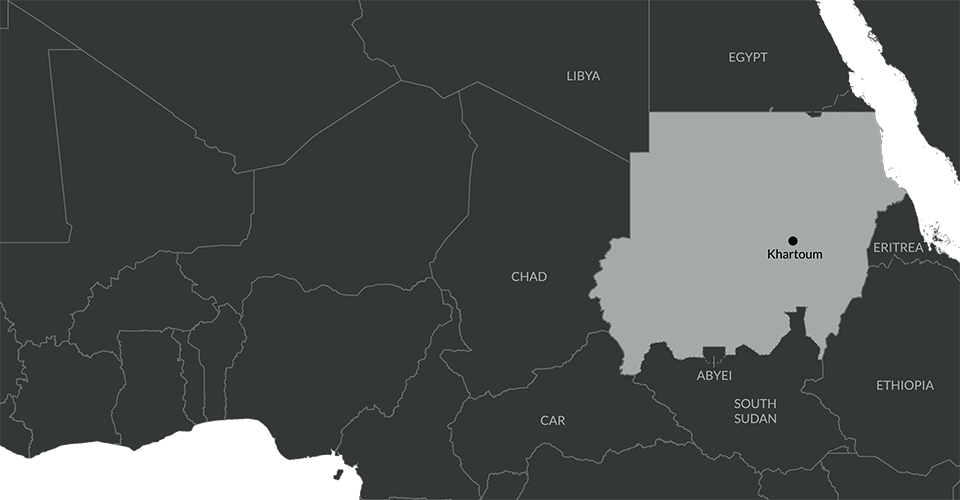 Protracted displacement is widespread in Sudan, the result of two major civil wars and the conflict in Darfur. There were 2.3 million people living in displacement in the country as of the end of 2020. Ongoing violence, particularly in Darfur, and disasters, predominantly flooding, trigger significant new displacements every year.

Sudan has been in a severe economic crisis since the beginning of 2018. The removal of wheat import subsidies and the devaluation of the Sudanese pound led, inter alia, to a sharp increase in the price of staple foods. Deteriorating living standards triggered countrywide protests which ultimately led to the ousting of the country’s president, Omar al-Bashir, in April 2019. Despite the recently signed peace deal between the transitional government and a coalition of non-state armed groups, more than 79,000 new conflict displacements were recorded in 2020. Additionally, around 454,000 new disaster displacements were triggered by floods.

Sudan has a long history of internal displacement. Conflict and violence have affected the country since the year before its independence in 1956, driven by the economic, political and socio-cultural marginalisation of southern Sudan, the Darfur region and South Kordofan and Blue Nile states.

The first Sudanese civil war began shortly before Sudan obtained independence from Britain and Egypt in 1956 and continued until 1972. It was the result of conflict between the central government and marginalised parts of the country, particularly the South, which differs from the North in terms of culture, language, ethnicity and religion.

The second Sudanese civil war, from 1983 to 2005, was largely considered a continuation of the north-south struggle, but also spread to the Nuba mountains in South Kordofan and Blue Nile states. It was one of the longest and deadliest civil wars in the second half of the 20th century. The Comprehensive Peace Agreement (CPA) signed in 2005 put an end to the 21-year civil war in Sudan. The agreement further established a ceasefire and a power-sharing agreement between the southern and northern regions, granted South Sudan autonomy, and paved the way for an independence referendum for South Sudan, which was held in 2011. The status of Abyei is still disputed.

The conflict in South Kordofan and Blue Nile states was reignited in June 2011 and became linked with the conflict in Darfur when non-state armed groups in both regions formed a coalition, the Sudan Revolutionary Front (SRF), dedicated to overthrowing the central government. However, the conflict has subsided in recent years as did the displacement related to it.

After president Omar al-Bashir was ousted in April 2019, the military and opposition groups established a transitional government as part of a three-year power sharing agreement. Negotiations between the transitional government and the SRF culminated in the signing of a historic agreement in October 2020. Its main components include a ceasefire, addressing land ownership issues, reparations for those affected by the conflict and plans for IDPs’ return.

The number of people living in displacement has decreased considerably in recent years, but the country was still home to at least 2.3 million IDPs as of the end of 2020. This reflects the continued conflict in some parts of the country and the many obstacles people face in their pursuit of durable solutions. The figure is also likely to be an underestimate, given the many challenges in obtaining data. Communal violence has been on the rise since 2019 and triggered most of the 79,000 new displacements recorded in 2020.

Sudan is very arid and large parts of the country are considered drought prone. This has had devastating humanitarian consequences because more than 54% of people live in rural areas and are largely dependent on rain-fed subsistence agriculture and animal husbandry for their livelihoods. These climatic conditions have overlapped with conflict and economic and political instability to create extremely high levels of food insecurity. Displacement associated with slow-onset phenomena such as drought is likely to have occurred, but its scale has yet to be determined.

Most of the disaster displacement recorded has been linked to flooding, including flash floods in arid areas and riverine flooding. Disasters, particularly flooding, are also devastating in areas where housing is not built to withstand such events. The latter is particularly common in eastern and south-eastern states through which the Blue Nile, White Nile and Gash rivers flow. Flooding tends to happen between August and September, at the height of the rainy season.

In 2020, Sudan experienced its worst floods in decades, and the river Nile reached record levels in September. The floods destroyed homes, damaged roads and impeded people’s access to health services and humanitarian aid. The floods of 2019 and 2020 also helped to fuel eastern Africa’s worst locust infestation in 25 years. By the third quarter of 2020, 9.6 million people in Sudan or 21 per cent of the population were food insecure, a record figure for the country.

The majority of people displaced by conflict live in South, North and Central Darfur states, which were hosting about 1.9 million IDPs as of the end of 2020. There were also 218,000 IDPs in South Kordofan state and 47,000 in Blue Nile state. Sennar state is likely hosting IDPs too, but no organisation nor the government assess the situation there. Displacement in areas outside government control is not recorded at all.

Most of the new conflict displacement recorded in recent years has taken place in Darfur, particularly in the Jebel Marra mountains at the intersection of Central, South and North Darfur. While IDPs and other civilians used to be attacked by militias associated with the former regime, new conflict displacement has been mostly triggered by intercommunal violence, including violence between herders and farmers.

Return movements have also been reported in Darfur as IDPs and refugees attempt to re-establish themselves in their areas of origin. It is very difficult to assess the sustainability of these returns, but many are likely to have been unsuccessful given ongoing insecurity. Returnees in some areas have reportedly faced violent intimidation by new settlers.

The UN Security Council terminated the mandate of the African Union-United Nations Hybrid Operation in Darfur (UNAMID) on 31 December 2020 after 13 years of operations. New waves of violence and displacement in Darfur have continued to occur.

Many IDPs in Sudan live in protracted displacement. Some of those living in camps in Darfur have been displaced since the onset of fighting in 2003. Continued insecurity has heightened their vulnerability and prevented them from achieving durable solutions. Humanitarian actors have struggled even to meet IDPs’ basic needs. Some of the main challenges include food security, health, and water and sanitation.

Lack of access to land for agriculture and other livelihood opportunities, periods of drought and unusually heavy rain and extremely high food prices have pushed many people into chronic food insecurity. Overcrowding and a lack of adequate water and sanitation has led to outbreaks of disease, including cholera. Around 2.5 million IDPs are thought to be in need of humanitarian assistance, food, water and sanitation assistance. Displaced children, who account for 50 per cent of displaced persons are particularly vulnerable. 4.6 million people are in need of protection assistance. Gender-based violence is also pervasive, both within camps and host communities and when women venture out to collect firewood or other resources.

The Sudanese government officially recognises IDPs’ rights and specific needs. A national policy on the matter was adopted in 2009, and the government’s Humanitarian Aid Commission (HAC) includes a dedicated unit for IDPs. The government signed the Great Lakes Pact in 2006, but has not signed or ratified the Kampala Convention.

The 2011 Doha Document for Peace in Darfur addresses the causes of displacement and refers specifically to compensation and the return of IDPs and refugees. The October 2020 peace agreement between the transitional government and the SRF laid out measures addressing land ownership issues, reparations for those affected by the conflict and plans for IDPs’ return.

There is also growing recognition of the interrelated nature of violence, instability, disasters, poverty and entrenched vulnerability. A multi-year humanitarian strategy was published in 2017. It was designed to improve long-term planning and cooperation between organisations working on development and humanitarian issues.

Efforts have also been made to mitigate the impacts of the most commonly recurring natural hazards and the risks posed by climate change. A national adaptation plan published in 2016 provides vulnerability assessments for different states and outlines strategies to integrate implementation into all levels of government decision-making.

Significant gaps remain, however, in the financing and implementation of these policies and legal frameworks, and access restrictions make it difficult to implement assistance and protection programmes for IDPs. Peacebuilding programming will also be key to enable durable solutions for IDPs.