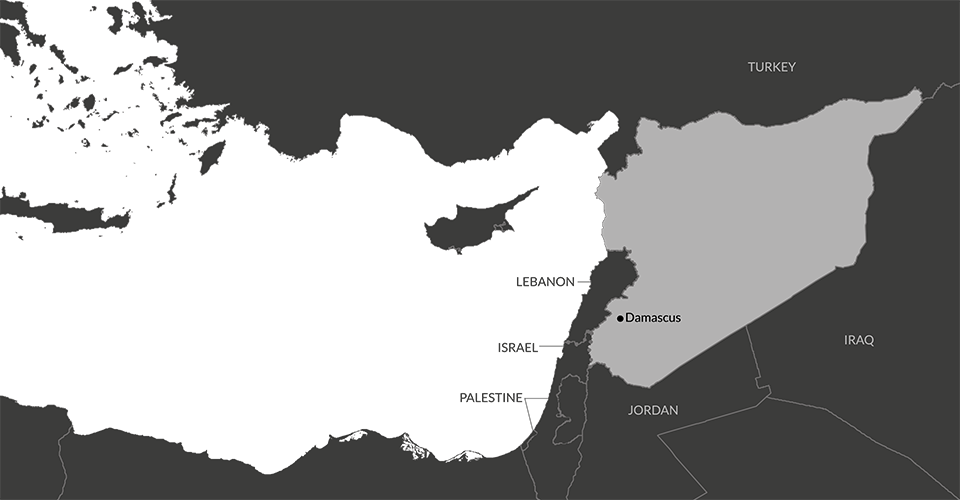 Syria’s civil war, now in its tenth year, began as part of the Arab spring protests which swept through the region in 2011. Peaceful rallies against the rule of President Bashar al-Assad quickly spiralled into an armed conflict that has displaced more than half of the country’s pre-war population. New displacement figures since have been some of the largest recorded globally.

The conflict triggered 1.8 million new displacements in 2019, mostly the result of military offensives in the north-east and north-west of the country. Around 6.5 million people were living in internal displacement as of the end of the year, the highest figure in the world.

In the first half of 2020, there were 1,474,000 new displacements associated with conflict and violence. Find out more in our Mid-year Update.

Peaceful protests began in the southern city of Dara’a in March 2011 following the authorities’ arrest and torture of 15 children who had called for the removal of the country’s president, Bashar al-Assad. After the Syrian military laid siege to Dara’a and violently repressed increasingly large demonstrations, a number of officers defected and formed the Free Syrian Army in July 2011.

From that point, the civilian uprising was transformed into armed conflict. Many frontlines opened up between government forces, large numbers of splintering armed groups and jihadist organisations such as the Islamic State in Iraq and the Levant (ISIS) and Hay'at Tahrir al-Sham (HTS), a coalition spearheaded by the al-Qaeda affiliate in Syria. Fierce fighting and violations of international humanitarian law perpetrated against civilians by all parties to the conflict have forced millions of people to flee within and beyond the country’s borders.

There was little respite in 2016 and 2017. The hostilities were all but relentless and included the deliberate targeting of civilians and civilian infrastructure such as schools and healthcare facilities. Many people have been displaced more than once to steadily diminishing areas of safety. During sieges such as the one in eastern Ghouta, which lasted for five years, people were deliberately deprived of aid and basic services such as food, water and medical care. Military operations such as the offensive to retake eastern Aleppo had dire consequences for the civilian population. Intense fighting triggered nearly 160,000 displacements and left the city in ruins.

The negotiation of two cessation of hostilities agreements by the US and Russia in February and September 2016 led to temporary lulls in the conflict and declines in displacement, but fighting and its impact on the civilian population flared again after each agreement. De-escalation zones negotiated between Turkey, Russia and Iran in 2017 that were to be implemented in non-government controlled areas of Idlib and Dara’a provinces and the eastern Ghouta and Homs enclaves raised hopes of at least a reprieve from the violence. Renewed government offensives in Idlib at the end of 2017 and eastern Ghouta in early 2018 extinguished that hope.

Offensives against ISIS in the north-east of the country took place on two main fronts during 2017. The government supported by Russian air power retook Deir Ez-Zour in November, triggering more than 800,000 displacements in the process. The US-backed Syrian Democratic Forces (SDF) captured ISIS’s self-proclaimed capital, Raqqa, in October, displacing the city’s entire population of 220,000 people and triggering another 250,000 displacements across the wider governorate. Return movements to these areas were recorded in 2017, but obstacles include the widespread presence of unexploded ordnance and landmines and the complete breakdown of basic service infrastructure.

Despite an overall reduction in violence and displacement in 2018, significant numbers of people were displaced in the first half of the year when government offensives reasserted control over of large swaths of territory including Dara’a and Quneitra governorates and parts of Damascus and Homs suburbs.

The government continued to make territorial gains in 2019. The most intense offensives were those in the north-western governorate of Idlib and north-eastern areas of the country bordering Turkey. Each triggered the displacement of hundreds of thousands of people, many of whom had already been displaced a number of times.

The situation in Idlib was of most concern. The government had planned to retake parts of the governorate by force in 2018, but fears of the humanitarian crisis it might trigger led Iran, Russia and Turkey to mediate a ceasefire. The agreement did not hold, however, and the governorate became the scene of unrelenting attacks that triggered mass displacement in 2019. Around 284,000 new displacements were recorded across the governorate in December alone and the situation continued to deteriorate in early 2020.

Another major development took place in the north-east of the country. After the US announced the withdrawal of its troops in October, Turkey launched a military operation known as Peace Spring. The widely condemned offensive triggered more than 220,000 internal displacements, mostly of people living in Kurdish border towns, and 17,900 cross-border displacements into northern Iraq.

Internal displacement patterns in Syria are influenced by a range of factors, including family ties, religious and ethnic affiliation, the territorial control of armed groups, apparent safety and access to shelter, basic services and humanitarian assistance. Many people are forced to flee at short notice and repeatedly over time, and they may face protracted periods of displacement with family separation a possible consequence.

There were 1.8 million new displacements recorded in 2019, a slight increase on the 1.6 million recorded in 2018. Shifting frontlines and subsequent changes to the security environment have made repeated displacement the norm. IDPs leave their places of refuge to return home during lulls in the fighting only to flee again when it resumes, or keep moving onwards as the conflict catches up with them. Some people have fled as many as 25 times in search of safety, protection and basic services.

The effective closure of the border in 2016 has made it much more difficult for people to seek refuge or asylum abroad. Syria’s southern border with Jordan has also been closed for years, leading to similar conditions of protracted displacement in that border region.

Return movements both internal and from neighbouring countries were recorded in 2017 and 2018, but for every return, new displacements were also recorded. Returns continued in 2019, when around 374,000 were recorded.

Syria’s displacement crisis is one of the world’s largest, the result of repeated violations of international humanitarian and human rights law by all parties to the conflict. Proximity to hostilities, increased poverty, family separation and lack of civil documentation all increase people’s protection risks and vulnerability.

Conditions in the country are not conducive to safe and dignified returns. The current focus on lifesaving humanitarian assistance is still vital given the depth of the ongoing crisis, but it should not overshadow the need for peacebuilding initiatives and longer-term support for those trying to achieve durable solutions. Without a resolution to the conflict and a process of reconciliation that includes all of the country’s ethnic groups and religions, displacement will not be brought to a sustainable end.

A new housing, land and property law known as Law 10 was passed in April 2018. The legislation, which is officially intended to expedite the expropriation of land for reconstruction and “redesign of unauthorised illegal housing areas”, began to take effect in 2019. People’s knowledge of the administrative procedures required to claim their property rights tends to be limited, and many IDPs who lost deeds and other documents during their displacement have found it is too late to do so as a result. Their inability to exercise their property rights effectively means they are unable to return, or at least not sustainably, even if reconstruction is under way in their home areas.

There were also around 1.1 million people living in hard-to-reach locations as of December 2018, a reduction compared with 2.9 million the year before. Government forces have retaken previously besieged areas, but humanitarian access to locations recently brought back under government control  is a significant challenge.

IDPs living both in official camps and informal settlements face overcrowding, especially in north-west Syria, with some sites are four times above capacity. Given the lack of space in displacement sites, a number of communities in Idlib province have reported an increase in the number of people living without a roof over their heads.

To calculate the figure for new displacements and total number of IDPs, we primarily use the Humanitarian Needs Assessment Programme (HNAP) and the IDP Task Force’s dataset, a compilation of data received from OCHA Syria, CCCM Turkey, OCHA Jordan, UNHCR Jordan and HNAP.

The figures are considered an underestimate for several reasons, including limited access to some parts of the country at certain times during the year, and lack of information on short-term displacements.

Publication
A state of emergency in north-east Syria: Hundreds of thousands displaced and a muted international response
Expert opinion
Syria: Reconstruction and challenges around housing, land and property