A record 33.3 million displaced by conflict and violence worldwide, with Nigeria in the top 5 countries most affected

Today IDMC launched its flagship annual report, the Global Overview 2014: people internally displaced by conflict and violence at an event co-organised by IDMC, the Norwegian Refugee Council (NRC), and the UN Refugee Agencey (UNHCR). The report, which covers internal displacement occurring in 2013, highlights that with both new and prolonged episodes of conflict and violence, Sub-Saharan Africa remains the region hosting the highest number of IDPs in the world since 2003.

The region saw a 55% increase in new displacement compared to the previous year, with the Central African Republic (CAR), the Democratic Republic of Congo (DRC), and South Sudan particularly affected. Says Jan Egeland, the Secretary General of NRC: “While the world’s attention is drawn to Syria’s tragedy, it is easy to forget the horrendous situations still faced by innocent people stuck in the midst of protracted conflict, such as the DRC which has suffered persistent turmoil dating back to the mid 90’s, or by people affected by cruel violence in forgotten corners of the world such as the Central African Republic.” 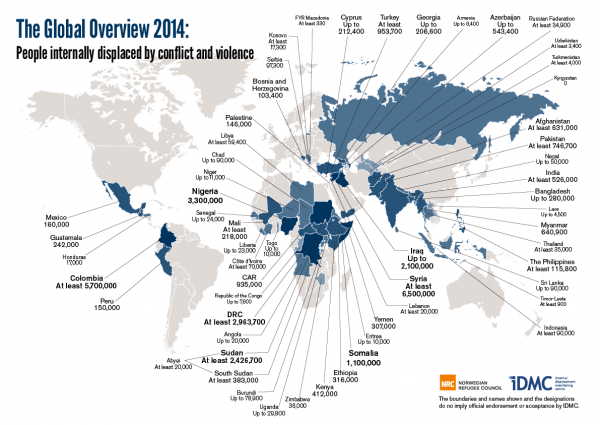 The High Commissioner for Refugees António Guterres added: “These numbers show why it’s so vitally important that the international response to Syria should not be at the expense of displaced people in Africa or elsewhere. The needs of the displaced in the Central African Republic, South Sudan and the DRC, as well as of the hundreds of thousands of refugees in the neighbouring countries are immense and growing.”

The number of internally displaced people in Nigeria is included in the annual report for the first time, announcing the country's place among the top five worldwide for total IDP populations. With Nigeria and DRC now reporting around 3 million each, and Sudan 2.4 million as internally displaced, these three countries alone account for a staggering 70% of the regional total.

“Multiple complex causes trigger displacement, providing significant challenges to governments and humanitarians on the ground,” says Alfredo Zamudio, Director of IDMC. “Violence, abuses, and forced evictions all add to the conflict-mix in many of these situations, while in places such as Nigeria we see how challenging life becomes for those already displaced by conflict when they are struck down again by severe floods and storms.”

The report also highlights the number of countries in Africa demonstrating their commitment to the rights and well-being of their internally displaced people by adopting the African Union’s Kampala Convention; the world’s first continental treaty which legally binds states to protect and assist their internally displaced people. In 2013, five more countries became legally bound by it: Angola, Côte d’Ivoire, Malawi, Sahrawi Arab Democratic Republic and Zimbabwe.

“This commitment is a huge step forward, and as an international community we should work hard to help ensure that these countries have all the support they need to implement it so that it makes real change for those on the ground,” says Egeland. “With displacement figures escalating year on year throughout the world, with no sign of going down, the Kampala Convention, while it cannot solve displacement alone, is something the rest of the world could learn a lot from.”