A state of emergency in north-east Syria: Hundreds of thousands displaced and a muted international response 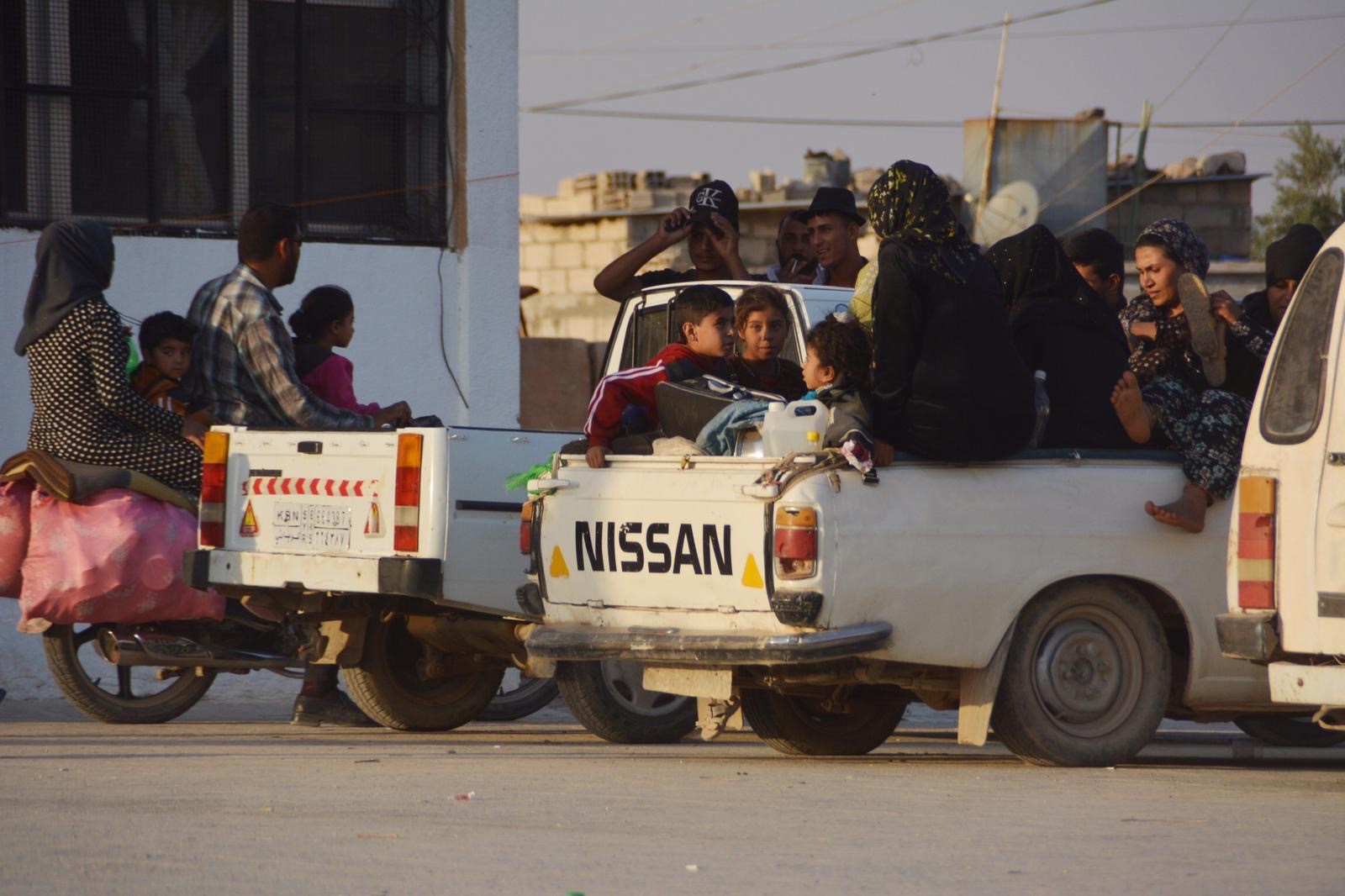 Guest blog by Thomas McGee, humanitarian practitioner and PhD researcher at the University of Melbourne, specialising on Syria since 2009.

“It’s almost exactly five years since we escaped to Turkey from ISIS [the Islamic State militant group]. Now that we are back, we are fleeing from Turkey inside our own country. This is not our home and land anymore,” says Rashid, a Kurdish local from the northern Syrian border town of Kobani. His narrative of displacement, return and subsequent further displacement speaks to the human tragedy at the heart of the protracted Syrian civil war. “Please pray for our children,” he adds, while preparing to relocate to safety out of the path of the escalating Turkish military operation into northern Syria.

After months of US-Turkish negotiations around implementing a “safe zone” on a strip of territory inside Syria, the Turkish army with Syrian partners unilaterally commenced its so-called “Peace Fountain” campaign in the same zone on 8 October. The American complicity in the offensive and decision not to intervene to protect the Syrian Democratic Forces (SDF), which has been a US military partner since 2015, has led to disastrous consequences for communities in several large settlements across the border.

Staggering levels of displacement and need

Initial displacement took place from the two border towns of Ras al-Ayn/Serê Kaniyê and Tell Abiad. The UN estimates that, by the morning of 14 October, at least 160,000 people had been displaced from their homes. Local actors suggest that the actual figure may be almost double. As Rashid fled with his wife and children south to Raqqa, his brother and parents went west to Menbij: “Nobody knows where to go… we don’t know where we can find safety,” he said.

According to international efforts to map the movement of internally displaced people (IDPs) across the region over the last week, it is estimated that approximately half of those displaced have taken refuge in Hassakeh, an urban centre some 70 km south of the border. Nonetheless, the mobility dynamics are very fluid as the IDPs continue to change their locations. Kadar Sheikhmous, director of local NGO Shar for Development, explains that; “People are struggling to find places of safety due to the fact that the incursions have expanded beyond the areas initially declared to be targeted.” This is the case in Tell Tamr, a majority Christian area in Hassakeh governorate, which is now hosting a considerable displaced population from the border stretch around Ras al-Ayn/Serê Kaniyê.

One local humanitarian responder described that there were shelter options available to some of the displaced people arriving to Tell Tamr, since many of the Christian Assyrian families from the area had already left to Europe. He stated, however, that people are hungry and thirsty: “There is no drinking water for these people to access since a Turkish airstrike targeted the Allouk water station that delivers to the area. Some people have been here for six days, and we are struggling to meet their needs.” An elderly woman who had been displaced there echoed these concerns, screaming; “Where are the organisations? Where is the UN?” One of the most active responders in the current emergency has been the Kurdish Red Crescent, a humanitarian organisation providing medical and relief assistance across the affected region. However, the Turkish army perceives them to be directly linked to the military targets of “Peace Spring” operation. The organisation’s capacity to respond has thus been severely limited by Turkish airstrikes and shelling on their ambulances and vehicles.

Who helps IDPs when the aid organisations have been displaced?

The humanitarian situation for the displaced has worsened yet further since the collective decision of international NGOs to withdraw from north-east Syria on 14 October, following the announcement that the desperate Kurdish-led SDF had made an agreement with the Syrian government’s military. Given that these INGOs have been operating only through the permissions of the de facto authorities linked to the SDF, they feared their presence in north-east Syria would be considered illegal by the central Syrian government. Their withdrawal and suspensions of operations - generally with the implementation of little or no contingency or continuation plans - has added further challenges and complications for those responding to the basic needs of the displaced in the area.

“The gaps in assistance are huge,” says Omer Amin from Hevy Relief and Development, a local humanitarian association. Hevy has served as a partner organisation for international NGOs operating in north-east Syria for the last five years. Himself now displaced among the IDPs in Tell Tamer, Amin explains that; “We undertook assessments from the start of this displacement, but the mobilisation of assistance has been slow. We are distributing everything we have in our warehouses, but it doesn’t meet a fraction of the immediate needs.” He explains that he knows the NGOs that withdrew are working out how they can continue to support their partners to deliver vitally needed assistance, but fears that their responses will come too late: “There are partners like us on the ground, and we have recruited more volunteers, but we simply do not have assistance to provide. Yes, we have also been displaced, but we are still committed to our mission to help people.” Other structural challenges include the fact that much of the international funding allocated to actors in the area has been ear-marked for stabilisation activities rather than the humanitarian response. 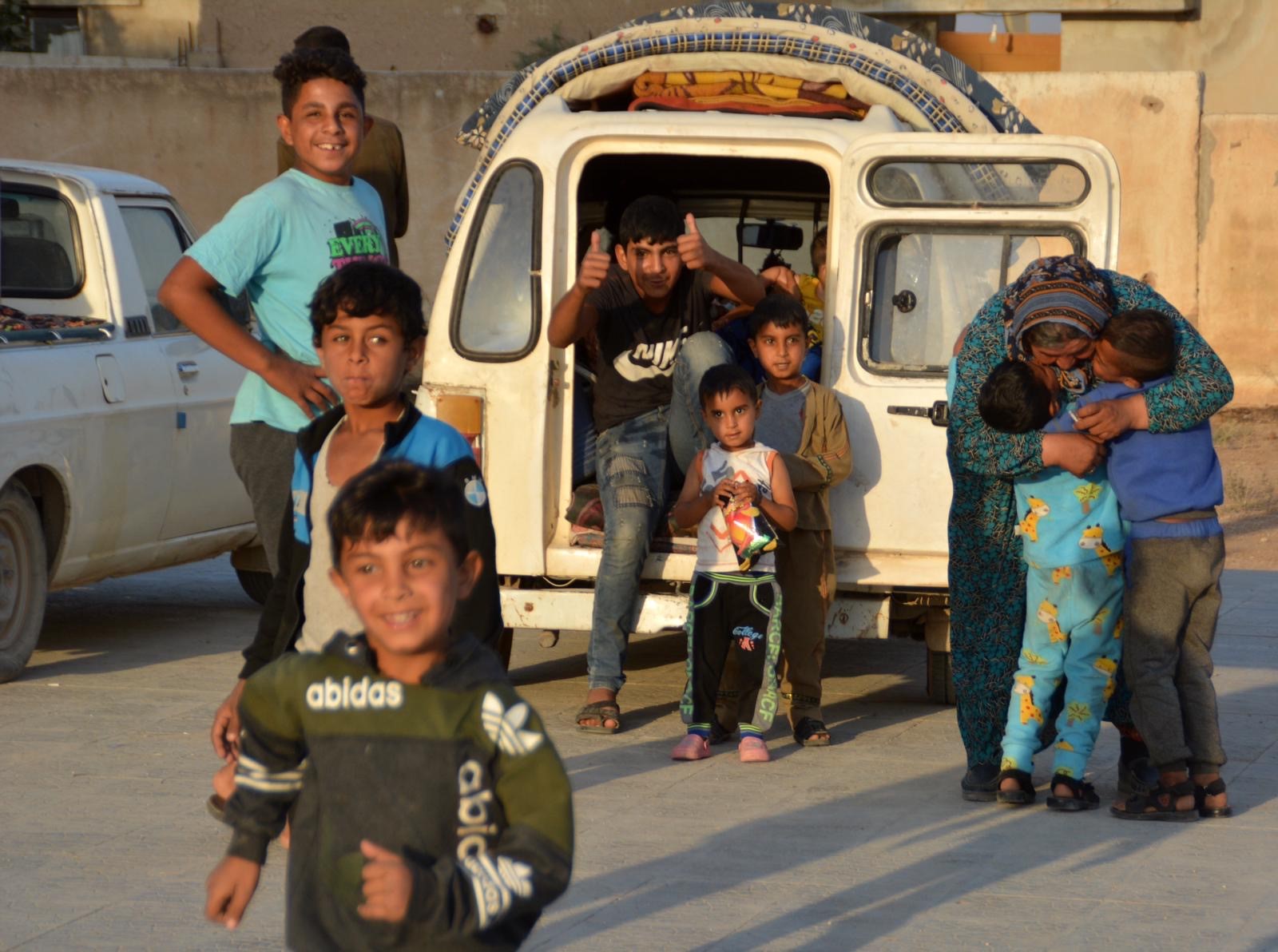 At the same time, the UN continues to struggle to navigate the complex politics of aid within the Syrian civil war. In response to the current crisis, local humanitarian actors have taken a number of steps to try and advocate for international action, as well as taking innovative steps to fill the gap themselves. An awareness campaign entitled “SOS Northeast Syria” was established, for instance, which issued a joint Humanitarian Statement by 97 local actors calling for a cessation to the Turkish offensive and immediate deployment of aid.

Alongside this, three local organisations in north-east Syria quickly entered into an operational “emergency coalition” to better respond to the needs of the displaced. Finding that their respective team members and volunteers were being displaced in different directions, the organisations of Gav, Doz and Dan decided to integrate their staff in order to maximise their capacity. They, like other local humanitarian actors, have sought to mobilise resources through multiple strategies. Awaiting commitments from established international donors, they have launched crowd-funding campaigns, as well as appealed to business owners in Syria and the neighbouring Kurdistan Region of Iraq for in-kind donations. For its part, Shar for Development has focused efforts on cash-based responses in view of the fact that both the hawala (money transfer) systems and local markets are so far functioning.

Meanwhile, efforts are urgently needed to curtail the continuing Turkish incursion, which risks displacing thousands more, especially if the key road networks are cut through further military advances to the south. While the immediate consequences for those displaced are becoming increasingly critical - as thousands of people sleep outside, exposed to the elements - there are also longer-term implications of the current crisis. For one, the future of humanitarian access for established actors in the area is very much uncertain. It is imperative that any deal reached between the de facto administration in north-east Syria and the Syrian government grant unimpeded access and necessary permissions for international and local organisations to continue to reach those in need. In the interim, the humanitarian community needs to urgently find alternative avenues to support the local actors present on the ground who have been cut off from their international partners.