As Nigerians brace for flood season, there’s “no excuse” to be caught unprepared

My last mission to Nigeria was in May, at a time when the world’s attention was fixed on the Boko Haram attacks and heavy-handed counterinsurgency in the country’s north-eastern region, forcing waves of people to flee both in Nigeria and to neighbouring countries and prompting President Goodluck Jonathan to declare a state of emergency in three states.

However, I was there to better understand a different, recurring problem, which right now looms over the people of Nigeria and threatens to wreak havoc and cause mass displacement across the entire country: the yearly flood season. 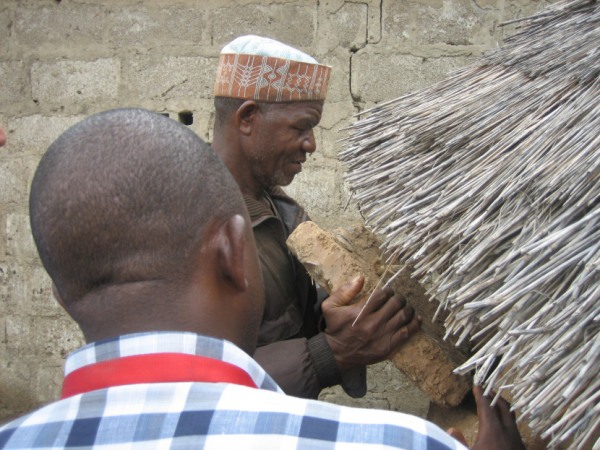 Gurmana, one of many villages that has slipped through the cracks

We had left the paved roads in Niger State miles ago. Our careful driver danced around the massive ruts that had been caused by the heavy downpours of last year. He glanced in the rear-view mirror to see that we were being followed by an older man on a motorcycle wearing a heavy down jacket despite the heat.

“He is the chief,’’ our companions informed us. ‘’He’s come to take us to see his village.”

The chief helped us into a solid canoe to access the village, and as we crossed the tranquil river he pointed to a cable several metres above our heads. Our interpreter explained that at the peak of the floods the water level had actually touched the cable dangling high above us. We were silent as we let this fact sink in, gazing out to the low farmlands surrounding the river and imagining the massive damage this must have caused.

This imagery was soon confirmed upon our arrival to the banks of Gurmana, one of thousands of villages in Nigeria which was devastated by the floods last year, which were much worse than anyone had anticipated; IDMC’s Global Estimates report 2012 ranked the Nigeria floods as the second largest disaster-induced displacement event worldwide.

Upon our arrival, members of the community led us through the fields, which had all been washed away the previous fall, and into the heart of a village, parts of which were still in ruins. The chief spoke excitedly, pointing to house after house which had suffered various levels of damage due to the onslaught of rain on their earthen construction. Some had already been rebuilt, some repaired; others were little more than mud.

Community members told us about the day the floods came. Water gushed into the region quickly, destroying much of the village’s food stocks and storage facilities. The entire community had to evacuate with only what they could carry with them up the hill to the primary school, where the hundreds of villagers all lived together in tight quarters until the water receded a month later.

The chief showed us a single tin roof – the only assistance the village received last year from the state government, which had proposed to relocate Gurmana to higher ground. While uprooting one’s life is far from ideal, the villagers were willing to accept the government’s proposition, but they lacked the support to do so, particularly as the land they depend on is wiped out each time the water sweeps over the banks.

Meanwhile, the community had made a request of its own. They had asked the government for tents, so that, when they did have to abandon their homes to the high waters once more, they would not have to interrupt their children’s education. This request had gone unanswered at the time of our visit.

A fragmented response to internal displacement

The full scale and impact of internal displacement in Nigeria are unclear, in part because data collection is poor and inconsistent. Information on numbers and needs of those displaced are often only available after larger scale crises, but they suggest that both violence and disasters caused by natural hazards have forced a staggering number of people to flee their homes. Millions were displaced by the 2012 floods alone. These gaps result in an alarming lack of understanding of the country’s displacement dynamics, most notably how people’s vulnerabilities are complicated by multiple cycles of displacement, and lead to response efforts that are fragmented and generally inadequate.

In the run-up to this year’s rainy season, President Goodluck Jonathan warned heads of ministries, departments and agencies whose functions are relevant to flood prevention and control that he would not tolerate a repeat of the 2012 flood disaster; “We have no excuse to be caught unprepared again after the floods of last year.” With the Nigerian Meteorological Agency predicting that rainfall this year will be a repeat of last year, if not worse, villagers in Gurmana and across Nigeria will have to wait and see if this rhetoric in the capital city will translate into concrete action.

Learn more about displacement in Nigeria