Can human development turn the tide on internal displacement? 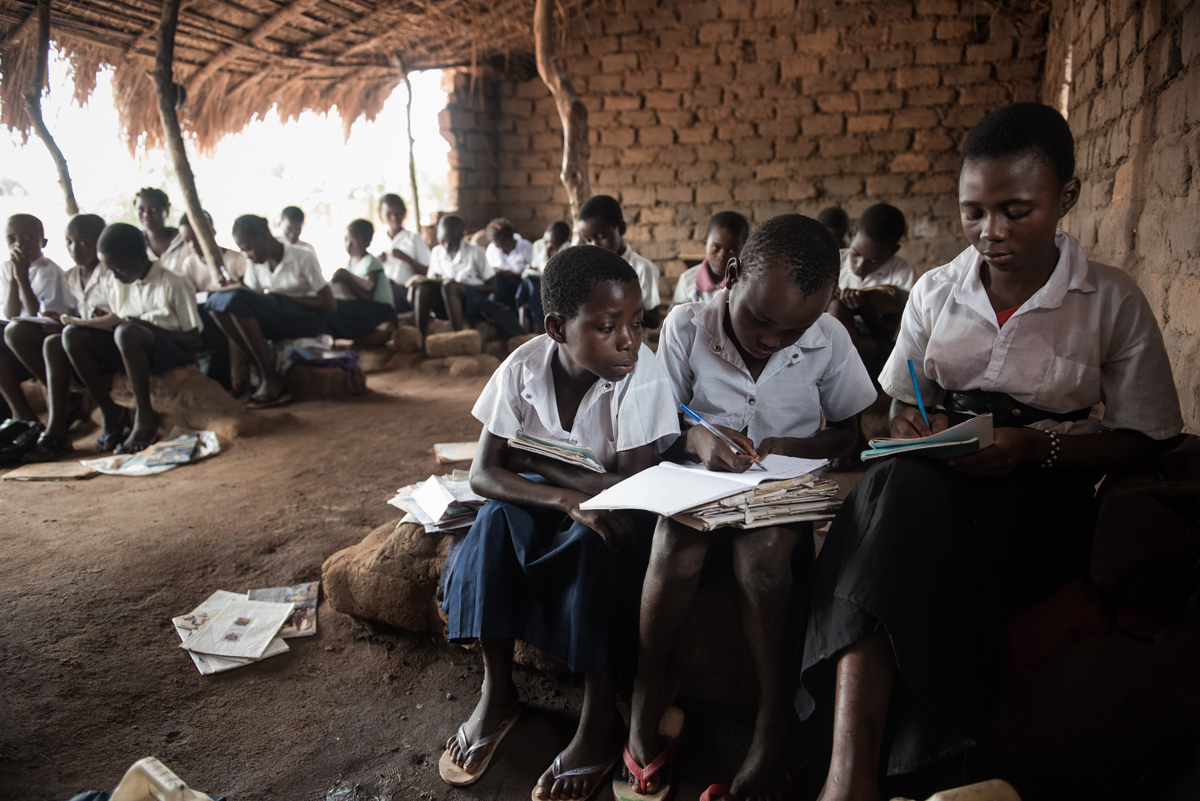 Original version is available on http://hdr.undp.org/en/content/can-human-development-turn-tide-internal-displacement

Twenty years ago, governments around the world recognized the severity of internal displacement and the need to help everyone forced to leave their home – but not their nation - because of conflict, violence, disasters, climate change or any other reason. Unprotected by international agreements on asylum seekers and refugees, most internally displaced persons (IDPs) nonetheless suffer from severe deprivations that can sometimes last for decades. In 1998, the United Nations adopted the Guiding Principles on Internal Displacement in the hope that it would help countries limit internal displacement and support IDPs.

Regrettably, the number of IDPs has increased steadily in the past two decades. The latest reports show that the number of new internal displacements associated with conflict and violence almost doubled in 2017, from 6.9 million in 2016 to 11.8 million. Syria and the Democratic Republic of the Congo reported the highest numbers of new conflict-induced displacements, with 2.9 and 2.2 million respectively. In addition, disasters led to 18.8 million new displacements in 2017. China was the country most affected by disaster-induced displacement in 2017, with 4.5 million, followed by the Philippines with 2.5 million. Efforts to protect and assist IDPs through emergency intervention have not been sufficient to present them with durable solutions to end their displacement. One way to turn the tide may be to consider internal displacement from a human development perspective.

The human development approach provides a comprehensive instrument to assess socioeconomic conditions. It focusses on expanding people’s choices for life and encompasses economic outcomes but also health and education levels, welfare and wellbeing. It can be used to examine the impact of policies or crises on people’s lives in both the short and longer-term. The very first report, in 1990,  broadened the development debate considerably, calling for governments to look beyond GDP and invest in human capital for a more inclusive and sustainable future.
Adopting a broader perspective is what governments need to do now to tackle internal displacement and achieve sustainable development for all. They must look beyond responsive, emergency operations to invest in preventive measures and durable solutions for IDPs.

It is not enough to only provide humanitarian assistance to IDPs at the time of their displacement for example. First, IDPs are often not the only ones to be affected by internal displacement. Both their host communities, and their communities of origin can bear a significant burden as workers become too many or too few, labour demand increases and vacancies decrease. Humanitarian and development actors, local and national governments must also bear additional costs. Even the private sector can suffer from reduced consumption or labour market disruption. Human development’s principle of universalism underpins the need to take every affected person into account, not only IDPs but also their dependents, their hosts, the government that provides for them and the private sector they contribute to.

Second, considering only the immediate visible impacts of internal displacement will lead to overlooking the submerged part of the iceberg. Until now, impact assessments have mostly been limited to adding up the cost of providing shelter and emergency aid to IDPs, or estimating the effects of labour market disruptions on wages in host communities. Adopting the human development perspective broadens the scope of analysis and allows for the accounting of longer-term effects in multiple, interconnected areas.

Every human development dimension can be affected by internal displacement, as illustrated in the figure below. Displacement can reduce access to employment, healthcare and education, with long-term consequences on the wellbeing and economic potential of all affected. A displaced child prevented from attending class for months or years, because schools in the host community do not have the capacity to educate her, may drop-out early which in turn will affect her labour market potential and income. The departure of workers from the region of origin may lead to a drop in production – and demand - and eventually lower tax revenues.  And all these concerns can lead to further internal displacement. 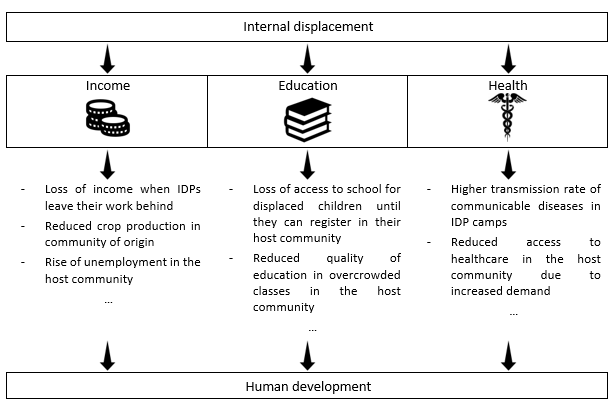 All these dimensions, including income, education and health but also security, environment, social life and housing, must be considered before one can arrive at a comprehensive assessment of the socioeconomic impacts of internal displacement. And only then can governments design effective policies for the prevention and the reduction of internal displacement.

It is time to adopt a new approach that will consider internal displacement more comprehensively, acknowledging its potentially devastating impact on the lives of those displaced and their host communities, as well as its consequences on the development of entire societies. Continued failure in this area may undermine progress towards the 2030 Agenda for Sustainable Development and the achievement of human development for all.