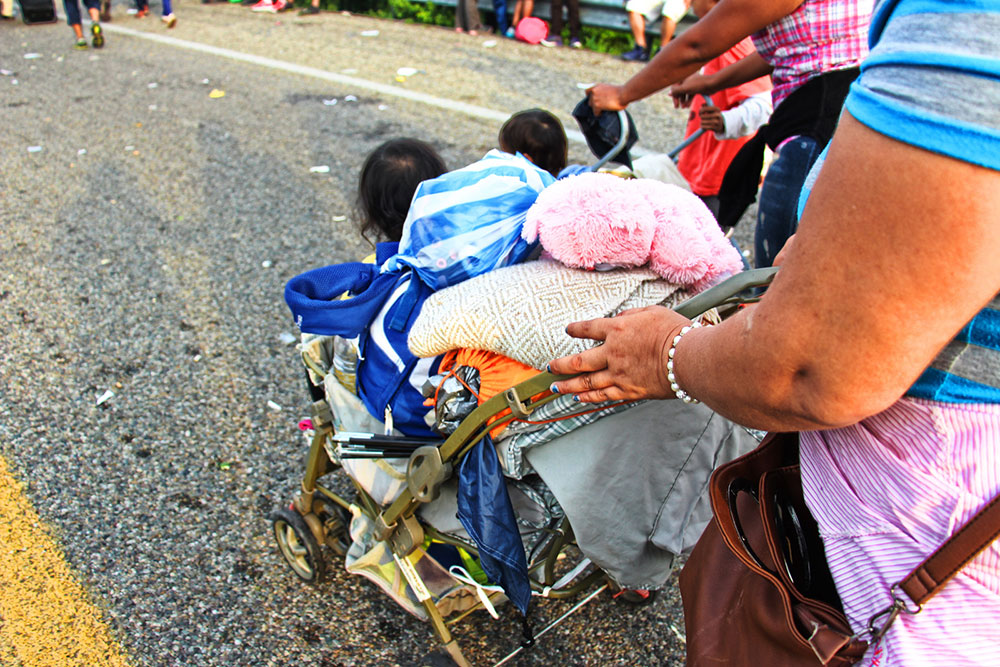 People making their way en masse from the Northern Triangle of Central America to the US signal a new and desperate strategy for individuals and families fleeing violence and crippling poverty in the region. IDMC’s Researcher Elizabeth Rushing and Monitoring Expert Andres Lizcano Rodriguez unpack this change of tactic based on recent research findings.

A new caravan of asylum-seekers is expected to set off from Honduras tomorrow at dawn. No one knows how many they number but they will follow the footsteps of thousands, from Honduras and neighbouring El Salvador and Guatemala, who attempted the 1,600-mile journey north in search of safety and security back in October.

Last week, President Donald Trump called these asylum seekers still trapped on the border between Mexico and the United States “a humanitarian and security crisis at our southern border”. But this is the real humanitarian crisis; desperate individuals and families trying to escape the crime, violence and poverty plaguing their cities, only to be denied safe passage.

Forced migration within and beyond the NTCA is by no means a new phenomenon. IDMC estimates there were at least 432,000 internally displaced people (IDPs) in the region as of the end of 2017, many of them driven from, and within, cities suffering the highest homicide rates in the world and levels of violence comparable with a war zone.

Experts in the region however, including our partner organisation the Cristosal Foundation, have rightfully flagged the caravans as a “new method of irregular migration,” and one that we could see more of in the coming months and years.

IDMC's recent field research in the NTCA sheds light on two aspects of these caravans that bear repeating: one, and contrary to popular misconception, many people across the region are fleeing real threats of violence rather than seeking the “American dream”.  And two, the caravans of men, women and children trekking towards the US are taking a calculated and desperate risk by stepping into the limelight and making their escape visible to the world.

No choice but to flee

Widespread insecurity and criminal violence plaguing the NTCA are major factors in many people’s decisions to leave their homes. In El Salvador, violent crime and targeted persecution are key drivers of flight. For others, it is one of a combination of factors that may include family reunification or stifling levels of poverty.

In Guatemala, IDMC’s research concludes that people generally prefer to remain in their home communities and attempt to mitigate factors such as direct or structural violence in an effort to avoid having to leave, and Hondurans interviewed in the so-called “migrant” caravans stress repeatedly the feeling that they had no choice but to go.

But this is nothing new. Andrea*, for example, left El Salvador four years ago when she was 15 with her mother and her brother. Her mother worked as a guard and she was threatened because of her job. While she did find work in Mexico, Andrea and her brother weren’t allowed to go to school because they had no documents. They considered turning themselves in to the authorities to avoid the dangers of the migratory route but decided against it for fear of being separated.

A clear and shared understanding of what causes forced migration within and beyond the NTCA, including those participants of the caravans, is a vital first step toward tackling its root causes and tailoring a response to the needs of those affected by it. It is crucial that national and regional efforts operate within the framework of displacement rather than miscategorise people as “merely” economic migrants with a choice to stay or go.

A calculated risk to be seen

In recent years, displacement in the region has mostly remained invisible, in large part because IDPs choose not to report their plight and seek support for fear of their persecutors finding them. This makes patterns difficult to discern, and reliable data challenging to collect. Just as people flee surreptitiously, they tend to try to remain under the radar and in hiding during their displacement.

Recent grassroots organisation of caravans marks a new strategy for those looking to escape their violent neighbourhoods. This method undoubtedly brings with it advantages: travelling in a large group may provide a much safer route north than the traditional method of hiring people smugglers. It's also clear by now that the gathering of these large groups draws attention to the forced migration crisis.

Apart from these real and vital benefits, however, this new method of migration in the NTCA also signals a darker trend of desperation. Until now, unwillingness to come forward is rooted in gangs’ code of silence, fear of reprisals, and widespread distrust of the authorities. Hard-to-reach groups such as adolescents, LGBT people and survivors of sexual crimes may be particularly reluctant to report for fear of being re-victimised.

Gathering en masse to travel in caravans should therefore be recognised as a calculated risk that people are being left with no choice but to take, flagging a new level of desperation for people across Central America. Andrea, who is now 19 years old and back in her home state, says she wants to avoid at all costs having to endure that trip again, for her little brother's sake: “That’s why I work, that’s why I try to help my mom”.