Conflict in Ukraine: What do we know about the internal displacement situation so far? 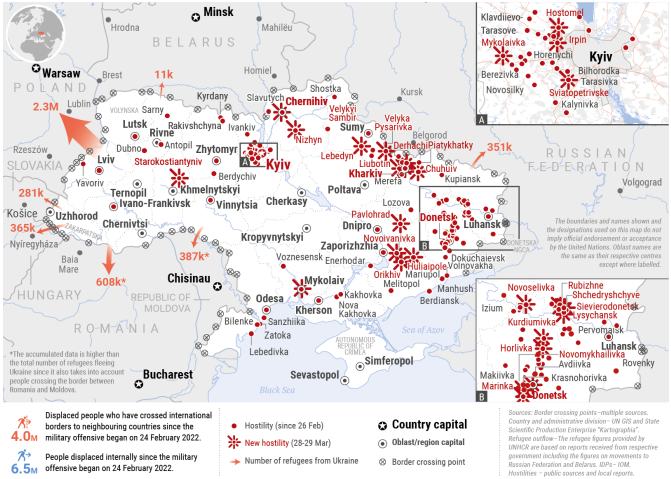 Map produced by OCHA Ukraine in collaboration with humanitarian partners.

Since Russia launched a military offensive against Ukraine on 24th February, civilians have been caught in the crossfire. Residential areas, hospitals and schools are under attack. The ongoing conflict has triggered Europe's largest forced displacement crisis in decades. As the fighting intensifies and civilians face dwindling supplies of water, food and medicine, the number of refugees seeking protection across borders rises daily. The situation for internally displaced people (IDPs) is becoming clearer, but reaching those in need remains a major challenge.

At least 6.5 million* people are estimated to have been internally displaced in Ukraine, according to the United Nations Protection Cluster.

While the fiercest hostilities continue in eastern Ukraine, the conflict has expanded with attacks escalating in the west, including only 25km away from Poland's border. Multiple airstrikes hit Lviv on 26 March, a city sheltering over 200,000 IDPs.

Most IDPs are sheltering with family, friends or in private rented accommodation in basements or underground car garages. The cost of renting, particularly in western Ukraine, has sky-rocketed due to increased demand. Air raid shelters and metro stations are also a place of refuge. A growing number are moving to collective shelters - public buildings such as schools, churches, gyms and concert halls - where a lack of gender separation greatly increases the risk of gender-based violence. While efforts are being made to improve conditions in these sites, more support is needed to resource them properly.

On top of the 6.5 million IDPs, more than 12 million people are thought to be trapped in affected areas, unable or unwilling to leave their homes due to ongoing clashes, the destruction of transport links or a lack of information on what options they have. These people are the most vulnerable, directly exposed to fighting all around them and almost completely cut off from water, food and medicine.

It has been reported that at least 200,000 people have been evacuated via humanitarian corridors, including around 75,000 from the besieged city of Mariupol. Another three million have been evacuated from eastern, southern and central Ukraine towards the West by train. But evacuations remain difficult due to targeted attacks on bridges and roads, and limited access to fuel and transportation.

Impacts on civilians and humanitarian response

Family separation is a significant concern, with conscription-aged men barred from leaving the country. There have been reports of men seeking the assistance of smugglers to leave the country but, for the time being, those on the move are primarily women, children and the elderly. More than four million children – over half of all the children in Ukraine – have been uprooted by the conflict, according to UNICEF. Elderly people and those with disabilities face compounded hardships in accessing safety.

There have also been alarming reports that African and Asian residents, as well as Ukrainian Roma and members of the transgender community, have been subject to discrimination, particularly at the borders of Ukraine, heightening their vulnerability and risk of further displacement.

This fast-changing and highly volatile situation represents a severe challenge for the humanitarian response, which in turn makes it difficult to fully understand the scale and patterns of internal displacement. The Government of Ukraine and humanitarian organisations are quickly scaling up aid, and local governments, NGOs, civil society, businesses, and host communities - on both sides of the borders - are also working hard to provide support but they are running out of resources to deal with the huge influx of people. Measures have also been taken to support local authorities in the registration of IDPs.

With active hostilities continuing, there are a range of scenarios that could unfold. So far, much of the displacement has been within eastern regions or towards central and western Ukraine. Depending on what unfolds in the East, North and South, more movements within these regions or to the West could be expected. The International Organization for Migration (IOM) conducted a survey which found that 26% of IDPs in the East, 20% in the South and 19% in the West intend to move on, yet only 12% in central Ukraine and 10% in the North.

As fighting intensifies in urban areas, people may be displaced multiple times in their search for safety. As much of the population trapped in the cities under attack face significant barriers to be able to leave due to shelling, mines and roadblocks, further waves of evacuations and displacement are expected at a later stage. IOM's survey indicated that at least 10% of people who have stayed at home say it is not safe for them to leave. Allowing them to move out of harm’s way will be critical.

Before this country-wide military offensive, the conflict in the eastern provinces of Luhansk and Donetsk left an estimated 854,000 people internally displaced. Many of them may have been displaced again.

Given that this is a fast-changing situation, it is not possible to estimate how many people will remain displaced within Ukraine and how many will seek international protection across borders. Ongoing insecurity combined with the destruction of homes and infrastructure mean that people are likely to remain displaced for prolonged periods of time. Furthermore, shortages in food, medical, electricity, gas and water supplies may aggravate the overall situation for those who are on the move.

The socio-economic impacts of the ongoing hostilities threaten to reverse decades of hard-earned development and poverty reduction gains. UNDP projects that, in the worst-case scenario, 90 per cent of the Ukrainian population could face poverty and extreme economic vulnerability. According to the Minister of Economy, Ukraine has suffered nearly US$565 billion in damages and losses since 24 February, a figure that continues to rise amid ongoing fighting.

Conflict in Ukraine is having severe impacts on civilians, including casualties, the destruction of infrastructure, disruption to public services, mass displacement and a rapid rise in humanitarian needs. After eight years of protracted conflict, needs were already high for some Ukrainians, and were further exacerbated by the Covid-19 pandemic.

Civilians, of all nationalities, must be protected and prioritised while a resolution to the conflict, including a ceasefire is being negotiated. Humanitarian corridors need to be secured and respected to evacuate at-risk people from cities under attack and get aid supplies in to support the most vulnerable.

The reaction of countries who have welcomed refugees with open arms must be commended. But solutions can't stop at the border, the implications for internally displaced people are likely to be far-reaching and long-lasting. They need our support more than ever.

*Note: The Protection Cluster, in collaboration with partners, is reviewing the methodology to estimate IDP figures within Ukraine. This latest estimate is based on IOM's population survey and includes reliable data from eastern and northern macro-regions of Ukraine, closest to active hostilities and hosting large caseloads of IDPs. Find out more here.