COVID-19 and internal displacement in Asia-Pacific: Towards local, rapid and inclusive disaster response 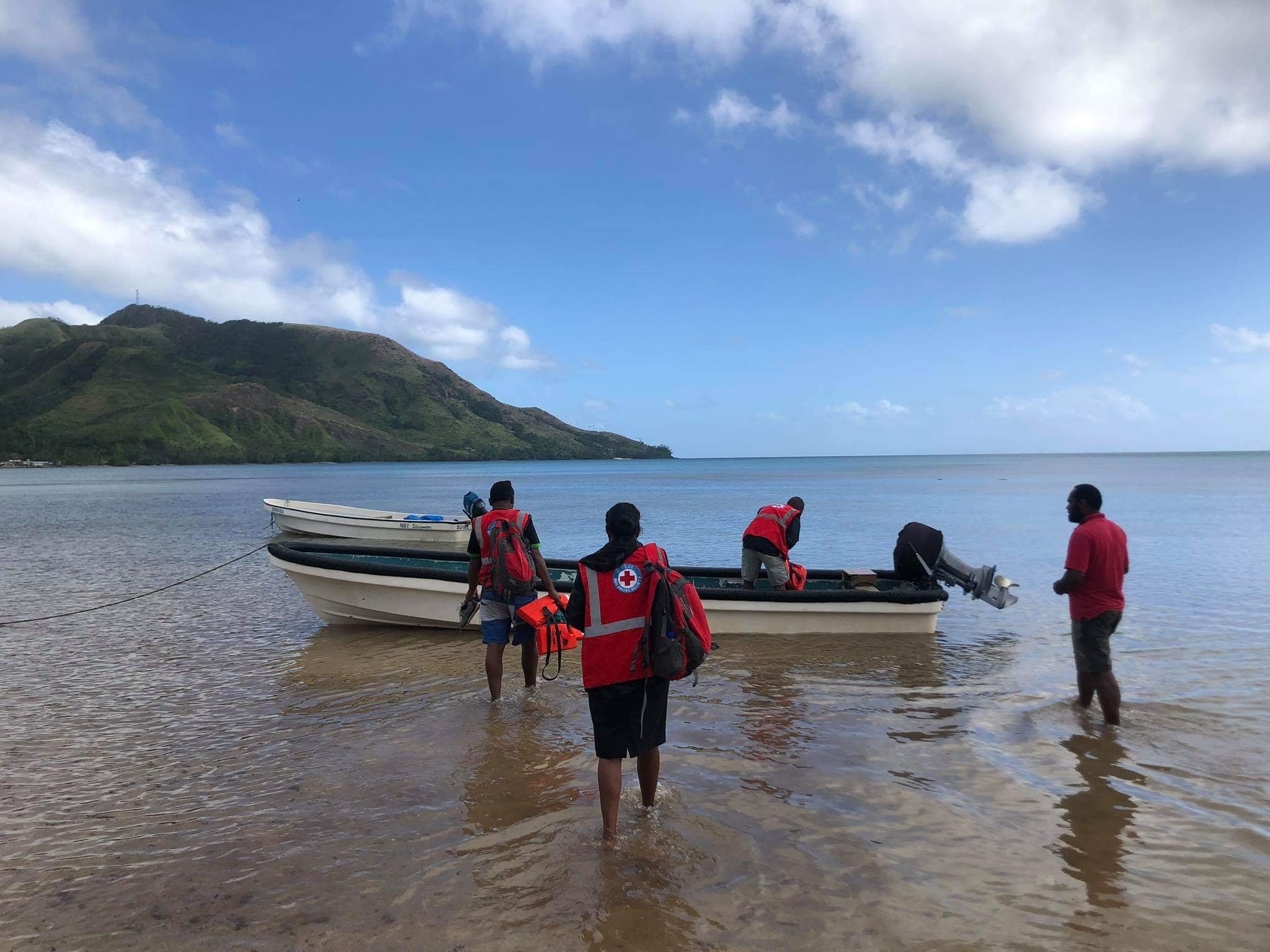 Fiji Red Cross teams conduct damage assessments and distribute essential relief items in villages on the island of Kadavu, which was one of the areas most affected by Tropical Cyclone Harold.

The Asia-Pacific region experienced 80 per cent of the total global new displacements associated with disasters recorded between 2008 and 2018. Since March 2020, like the rest of the world, the region has also had to contend with the COVID-19 pandemic.

While the outbreak has not stopped disasters from uprooting people, it has challenged authorities to adapt their response in the face of simultaneous crises. The delivery of aid has been reduced as a result of lockdowns and travel bans, and access to safe shelters has been restricted due to the potential risk of infection and the establishment of social distancing measures. Although the pandemic has challenged disaster preparedness and response plans, it has also led to the development of new responses in the region, powered by local organisations.

Community innovation in times of disaster

The COVID-19 pandemic coincided with the end of the tropical storm season in the South Pacific and the beginning of the season in the Bay of Bengal. Early in April 2020, the category-5 Tropical Cyclone (TC) Harold struck Vanuatu, Fiji, Tonga and the Solomon Islands, triggering more than 89,000 new displacements across the four countries. A month later, category-5 “super-cyclonic storm” Amphan wrought havoc in India and Bangladesh, displacing close to 3.4 million people. Both storms were the strongest to hit their respective regions in decades, compounding the burden for affected countries already struggling to cope with the impacts of COVID-19.

Despite Vanuatu recording no COVID-19 cases at the time of the cyclone, aid workers were not allowed to enter the country. These travel bans at national and international levels prevented any access to impacted communities living on spread out islands, which by nature rely on external aid. This consequently led to the development of a localised disaster management structure.

By the time TC Harold made landfall, more than 1,000 Red Cross volunteers had been trained and deployed across the four countries to provide essential items to displaced households. They faced significant challenges, such as the ability to mobilise transportation to move displaced people, while respecting social distancing measures. Technology, such as the online video conferencing application Zoom, allowed international organisations based in Geneva and Australia to assist volunteers remotely with technical support.

As underlined by the Logistics Officer for the Vanuatu Red Cross, Suzanna Gislapno: “It’s been uplifting to see how communities are finding their own solutions”.

Similar trends, but at much larger scale, were observed in India and Bangladesh when Tropical Cyclone Amphan wrought havoc in May. Indian local authorities usually rely on nearby towns to assist isolated villages. However, the nation-wide curfew due to the pandemic restricted people from leaving their homes during the disaster. In order to keep them safe, a village in West Bengal mobilised 8,000 volunteers to shelter evacuated communities safely, as well as to distribute core relief items, such as food, water and hygiene kits. In Bangladesh, proactive decisions shaped disaster management. Local volunteers were trained to pre-position goods in the shelters to not only avoid physical interaction but also to anticipate shortages in times of shutdown.

While the COVID-19 pandemic has challenged communities, it has also brought about innovation in times of disaster. As the above examples highlight, communities have found effective coping mechanisms which has led to authorities listening to IDPs more actively, strengthening their voices, and acknowledging the potential of involving communities in disaster response areas they know best. The pandemic may bring about the potential for a more rapid, tailored, and inclusive response to internal displacement.

To better prepare, plan and respond to disasters

The implementation of an informed and proactive disaster management plan depends on the available context-specific information. Displacement risk in Asia, which hosts 59 per cent of the world’s population, has been in the spotlight of researchers and statisticians for a while. Sea level rise and coastal erosion, among others, are proven existential threats for the Pacific Islands. It is, however, still unclear to what extent these impacts will affect the population dynamics. Knowledge and understanding of disaster displacement in the Pacific are less comprehensive than in Asia, as monitoring capacity is lacking at all government levels.

Following the International Day for Disaster Risk Reduction on 13 October, Fiji launched the National Disaster Awareness Campaign set to last until April 2021. The initiative aims to better prepare the population for disasters, by channelling accurate and timely information before, during and after the event. According to IDMC’s monitoring of disasters in the country, since 2008, around 153,000 displacements have been triggered by disasters in Fiji. In addition, our initial risk assessment has found that 50,000 Pacific Islanders are at risk of losing their homes each year.

Together with the Marshall Islands, displacement risk in Vanuatu, Tonga, Fiji and the Solomon Islands are the focus of IDMC’s new project, the Pacific Response to Disaster Displacement, funded by the Directorate-General for International Cooperation and Development (DG DEVCO) of the European Commission. Over three years, the project aims to generate new evidence to inform a new disaster displacement response through better policies, planning and operational tools.

Ultimately, the pandemic may well act as a trigger for implementing fit-for-purpose, rapid and inclusive responses, powered by local communities.

Banner: Fiji Red Cross teams conduct damage assessments and distribute essential relief items in villages on the island of Kadavu, which was one of the areas most affected by Tropical Cyclone Harold.

Media Centre
Science warns us that climate change will drive more people from their homes. So what should we do about it?