Deported to displacement in Central America 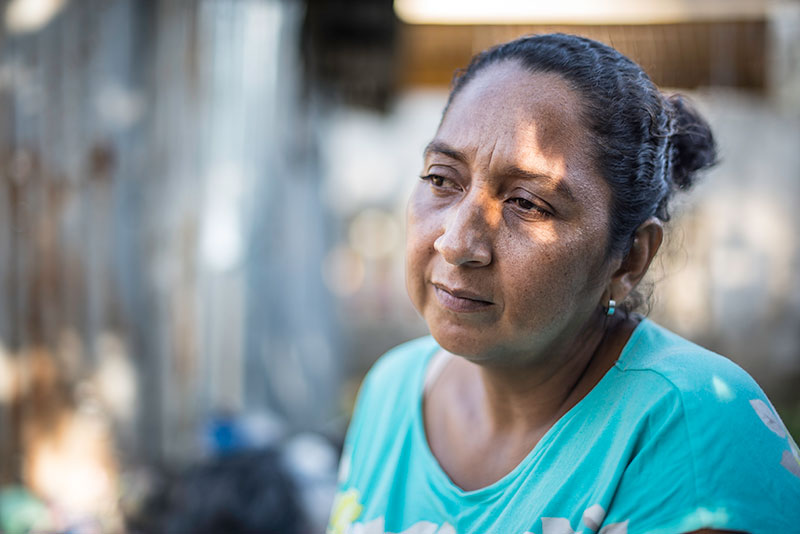 "Maria" and her children were chased away from her home in Honduras by a criminal gang. She worked hard to support her children, but life was still hard. She decided to start all over again in the US, but she was deported back to Honduras. Photo: NRC/Ana Karina Delgado Diaz, November 2017

Crises of violence, protection and governance grip the Northern Triangle of Central America (NTCA), casting tens of thousands of men, women and children into a potentially endless cycle of displacement and danger.

States’ refusal to acknowledge the realities within their own borders, along with transition and destination countries’ harsh attempts to prevent entry by desperate people, and deport those who arrive, have not succeeded. Instead, they have created a multi-national humanitarian emergency.

Barack Obama, then president of the US, declared in July 2014 an “urgent humanitarian situation” on the southern border of his country. In that year, 137,000 children and families had arrived from El Salvador, Guatemala and Honduras — twice as many as the year before. This humanitarian situation became known as the unaccompanied child migrant crisis and was the first public and internationally visible sign that the demographics and drivers of migration along the Mesoamerican migratory corridor had changed. Central American women, children, and families escaping from extreme levels of violence challenged well-established assumptions that Mesoamerican migration was primarily undertaken by lone Central Americans seeking work, and raised difficult questions about states’ responsibility to protect throughout the region. Four years later, the crisis continues to escalate: US President Donald Trump’s deportation policy has led to children being separated from their parents and locked up in detention centers, and the cancellation of Temporary Protected Status (TPC) for 195,000 Salvadorans and 57,000 Hondurans will test Central American governments’ capacity to absorb and protect their returning citizens.

The countries of the NTCA have long histories of emigration, but have been slow to recognise the impact of insecurity on migration, and consequently, their responsibilities to children and families fleeing violence within their own borders. In El Salvador, the front page of the Prensa Gráfica in May 2015, read: “NRC calculates that 289,000 Salvadorans were displaced by violence.” The sub-title elaborated: “The Norwegian Refugee Council’s annual report includes El Salvador on the list of countries with internal displacement, the same day more than 100 families abandoned their homes in a village in Izlaco for fear of gangs.” At the time of writing, the Salvadoran government has still not officially recognised internal displacement by violence. A landmark ruling by the Salvadoran Supreme Court has determined that the government’s failure to recognise internal displacement and protect citizens constitutes a systemic violation of fundamental rights.

The number of children and families from NTCA nations arriving in the US has not significantly changed since the heralding of the crisis four years ago. Neither have levels of violence in the region. Homicides peaked in 2014 without subsiding in the subsequent years; the combined total homicides in the three NTCA countries was around 12,000 in 2017. Seven thousand children were murdered in El Salvador in the last four years alone. The levels of violence in the NTCA are comparable to other armed conflicts globally, yet governments in countries of origin, transit, and destination have been reluctant to prioritise a humanitarian response in regional security, development, and migration policy.

The absence of a comprehensive protection response is evident in the decision-making processes of victims of violence and persecution and of refugees who have fled for safety.  According to the Salvadoran Ministry for Justice and Security report on internal human mobility caused by violence, 70 per cent of people internally displaced do not report crimes or seek state assistance. In 16 in-depth interviews conducted by Cristosal, in a research partnership with IDMC, deportees from the NTCA countries report that when they fled their homes they had no expectation that any state, whether their country of origin, transit or destination, would assume the responsibility for the protection of their lives and fundamental rights. They had good reason: governments in NTCA countries prioritise repressive military security approaches over assistance to victims. Countries of transit and destination adopt deterrent strategies to prevent people entering or remaining over the protection of families fleeing persecution and generalised violence. The persistence of forced internal displacement and cross-border movements caused by violence demonstrates the ineffectiveness of current NTCA security strategies in reducing violence and restoring the rule of law to areas controlled by criminal groups. It also illustrates that harsh immigration policies do not deter NTCA families from fleeing for their lives.

This protection failure across the displacement continuum, from country of origin to destination and back again, feeds a cycle of vulnerability and discrimination in which NTCA families fall outside the protection of any state. IDMC and Cristosal’s research demonstrates this important relation between protection response during internal displacement, cross-border movements, and deportation. According to the Salvadoran immigration department (DGME) data, based on surveys with deported migrants, 40 per cent of deportees who originally fled El Salvador because of insecurity do not return to their communities of origin.

In effect, deportation of Central Americans with protection needs condemns them to return to a condition of internal displacement. In its in-depth interviews, Cristosal found that six of the 16 deportees with protection needs suffered violence upon return.  The most common means of escape from the displacement cycle is the acceptance on the part of displaced people of restrictions placed on their basic freedoms and personal security. One IDP wrote from the confinement of a safe house in El Salvador: “my freedom in exchange for security.”

Responding to humanitarian needs across the Mesoamerican migration corridor is a moral and strategic imperative. Unaddressed humanitarian need, militarism, and the harsh treatment of refugees and migrants deepen the distrust in which vulnerable people escaping violence hold the national authorities mandated to protect them. The region is suffering a dramatic protection crisis, but perhaps more concerning are the destabilising effects of a governance crisis in which potentially hundreds of thousands of Central Americans on the run are unable or unwilling to avail themselves of the protection any state. A regional commitment to protection and responsibility-sharing, through programmes to strengthen protection systems in NTCA and expanding access to asylum and humanitarian relief across the Mesoamerican migration corridor, is necessary to stabilise the region and save lives.

Banner: "Maria" and her children were chased away from her home in Honduras by a criminal gang. She worked hard to support her children, but life was still hard. She decided to start all over again in the US, but she was deported back to Honduras. Photo: NRC/Ana Karina Delgado Diaz, November 2017