Did you know that millions of people around the world are still uprooted from their homes by disasters? 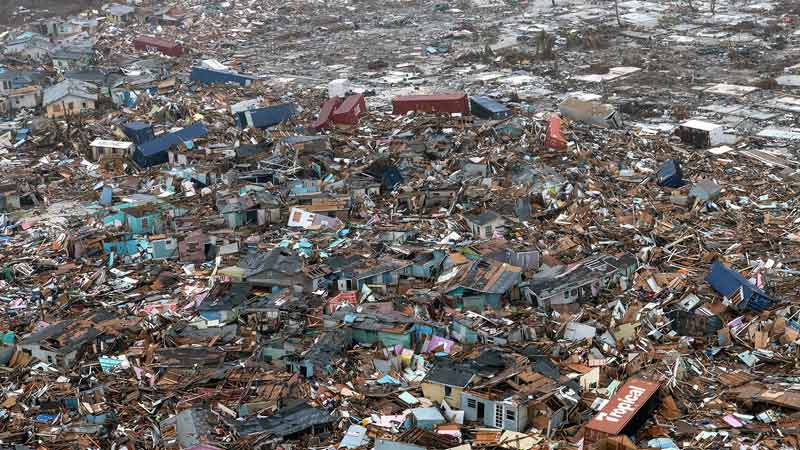 Impacts of Cyclone Dorian in the Bahamas in 2019. Credit: OCHA

Last week, countless homes were destroyed by flash floods in displacement sites across Yemen. With the population already suffering from one of the world’s worst humanitarian crisis following years of war, how long will it be before people can return home and rebuild?

For the first time, IDMC has estimated the number of people who remain internally displaced as a result of disasters across 95 countries: 5.1 million as of 31 December 2019. This includes 1.2 million people displaced by years of drought and floods in Afghanistan, and more than 500,000 by monsoon rains in India in 2019. In this blog, we explain why this first estimate is important to better understand the duration and conditions of disaster displacement, and how major data gaps mean there is much more we do not yet know.

Debunking the myth that disaster displacement is only short-term

With this estimate, and the data used to produce it, we challenge the assumption that disaster displacement is only a temporary phenomenon – that people return to their homes following a disaster and that their displacement has therefore ended. And while this may be true in some scenarios, such an assumption cannot be made without monitoring the conditions of the displaced population over time. Some people can remain displaced for weeks, months and even years when they have lost their homes. This may well be the case for some people in India and Bangladesh who were left homeless by Cyclone Fani in April 2019.

As we collect and record more information across the world, specifically on housing destruction, we have developed a methodology which reveals that people can in fact remain displaced over a long period of time. This is the case for the 33,000 Haitians who are still displaced from the 2010 earthquake and the 52,000 people who remain displaced from the 2011 earthquake and tsunami in Japan.

Such examples reveal the need for better monitoring and data collection over time to enhance our understanding of the needs of IDPs in these contexts and the long-term impacts for them. This key data gap has significant implications for the provision of protection and assistance to those who remain displaced and, without this detailed information, aggregated global estimates of the number of people still living in internal displacement at the year-end are incomplete.

This is not the first time that we have attempted to quantify the number of people who remain internally displaced worldwide by disasters. In previous years, we developed and tested methodologies to assess this phenomenon. However, given a lack of adequate data, our estimates posed a challenge and revealed not to be accurate or representative.

In 2016, we collected data over time on as many disasters as possible from the 50 largest displacement events that year and from the ten largest disaster events between 2008 to 2015. Limitations were uncovered, including that the period for which data was collected following different disaster events varied considerably. As a result, IDMC could not endorse the figure. In 2018, we were able to estimate a global figure for disaster displacement for that year alone. One of the considerations and limitations of the methodology used in 2018 was that the same method was applied to all events, across inherently different contexts.

In 2019, we obtained more data than ever before. This included data on both the number of people displaced over time, as well as more data on the number of houses destroyed. Taken together, this enabled us to estimate the total number of people who remain internally displaced for 95 countries. The method we used involved several possible scenarios, based on the availability and type of data per event we were able to obtain throughout the years. Our ‘decision rules’ allow us to overcome the lack of harmonised data on displacement and housing destruction across all countries we monitor. The methodology allows for a context-specific approach tailored to the data we have for each country or event. For example, we question whether the 121,000 people displaced from the Niger rainy season in 2019 are still displaced, and if so, for how long? As this estimate comes from information on housing destruction, we do not have a way to assert that people are not still displaced. 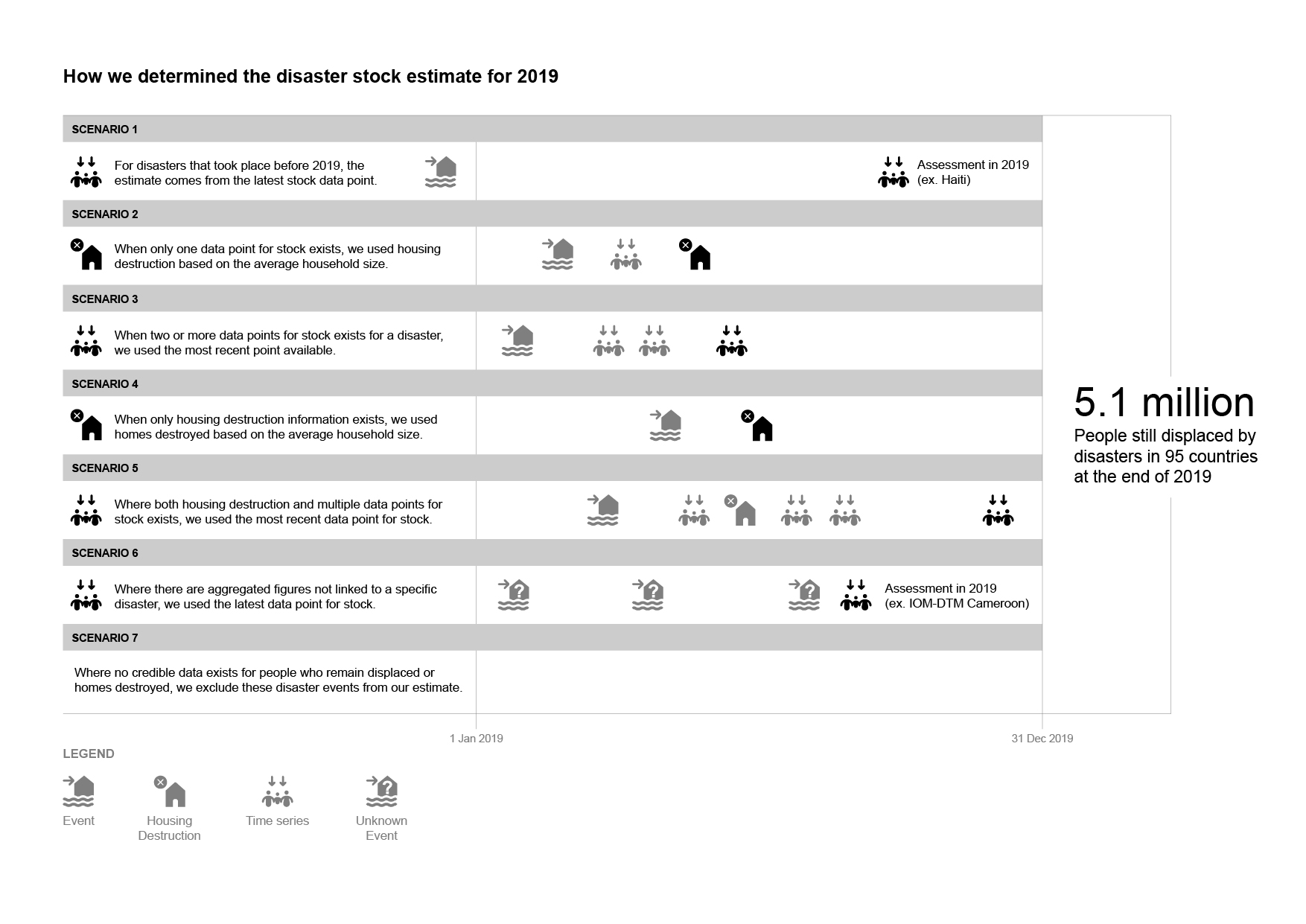 While the total global figure of 5.1 million is a useful first step, it remains conservative. It is based only on those events for which we had at least some data over time, and around 50% of the events where we have housing destruction data. To use and analyse housing destruction data, we based our work on the U.S. Government (FEMA) study from the 2015 Nepalese earthquake, which reveals that the average length of time it takes to reconstruct destroyed homes is 15 months. More than 95% of our global estimate is composed of people displaced in 2019, and the rest (only 25 disaster events in total) are from previous years, where we received specific information indicating historic displacement.

An incomplete picture of internal displacement

As important as this first estimate is, the picture is not yet complete. It is based on only a small fraction of the events we detected in 2019. For some events we were not able to find enough data for a long enough period of time. We are working with partners (i.e. Oxford University and Facebook) to fill this gap, however. Our methodology and the data upon which our figure is based remains a work in progress, and we welcome any feedback or additional support from partners. Even if conservative, our initial estimate helps question the assumption that disaster displacement is only a short-term phenomenon. There is still currently not enough data and information to assess the actual duration of displacement for everyone who has been forced to flee their home as a result of a disaster.

If the needs and vulnerabilities of IDPs are to be considered in disaster response, recovery, and reconstruction processes, it is critical that data collection efforts continue for longer periods of time. We hope that soon we will be able to improve this estimate and enhance our understanding of the longer-term impacts of disaster displacement in a wider range of countries and events. Even now, people across the globe are losing their homes and livelihoods because of disaster events. This is true in Yemen as a result of flash floods, and in the United States from deadly tornados. Questions remain: How many have been displaced? How many houses have been destroyed? Will people be able to return home? If so, when, and under what conditions?

For more information on how each scenario has been developed and adapted, please refer to the GRID2020, our methodology or contact us at info@idmc.ch

Banner: Impacts of Cyclone Dorian in the Bahamas in 2019. Credit: OCHA

IDMC’s regional workshop: filling the data gaps on internal displacement in the Central Sahel
Expert opinion
EU-funded collaboration in the Pacific supports local efforts to reduce the risk and impact of disaster displacement

Media Centre
Internal Displacement Conference 2022
Events
Global food insecurity is on the rise, so is internal displacement. What is the relationship?
Expert opinion
Assessing the severity of displacement situations: data gaps and ways forward