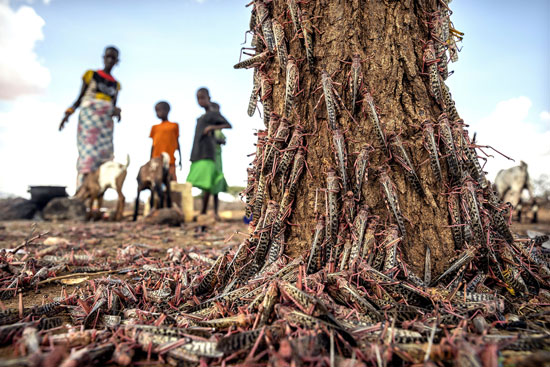 An unprecedented overlap of natural and man-made disasters are plaguing the Greater Horn of Africa region. We have seen one million displacements in two months, communal tensions reignited, and pre-existing vulnerabilities exacerbated.

In recent weeks, our news channels have been flooded with stories about the Covid-19 pandemic, political and social unrest around the world, natural hazards upending people’s lives, and even a locust infestation, which surfaced in Sub-Saharan Africa then migrated towards Asia, destroying crops and pushing vulnerable communities to the brink of starvation.

But what happens when all these factors collide in one place? You get a perfect storm of displacement triggers, like the one currently unfolding in East Africa. Flooding from heavy rain continues to destroy homes and livelihoods. Entire displaced communities struggle to seek shelter due to the risk of overcrowding and therefore contamination from Covid-19. Homeless, and with the threat of the virus and wider political changes hanging overhead, they lack the means to feed or provide for their families. 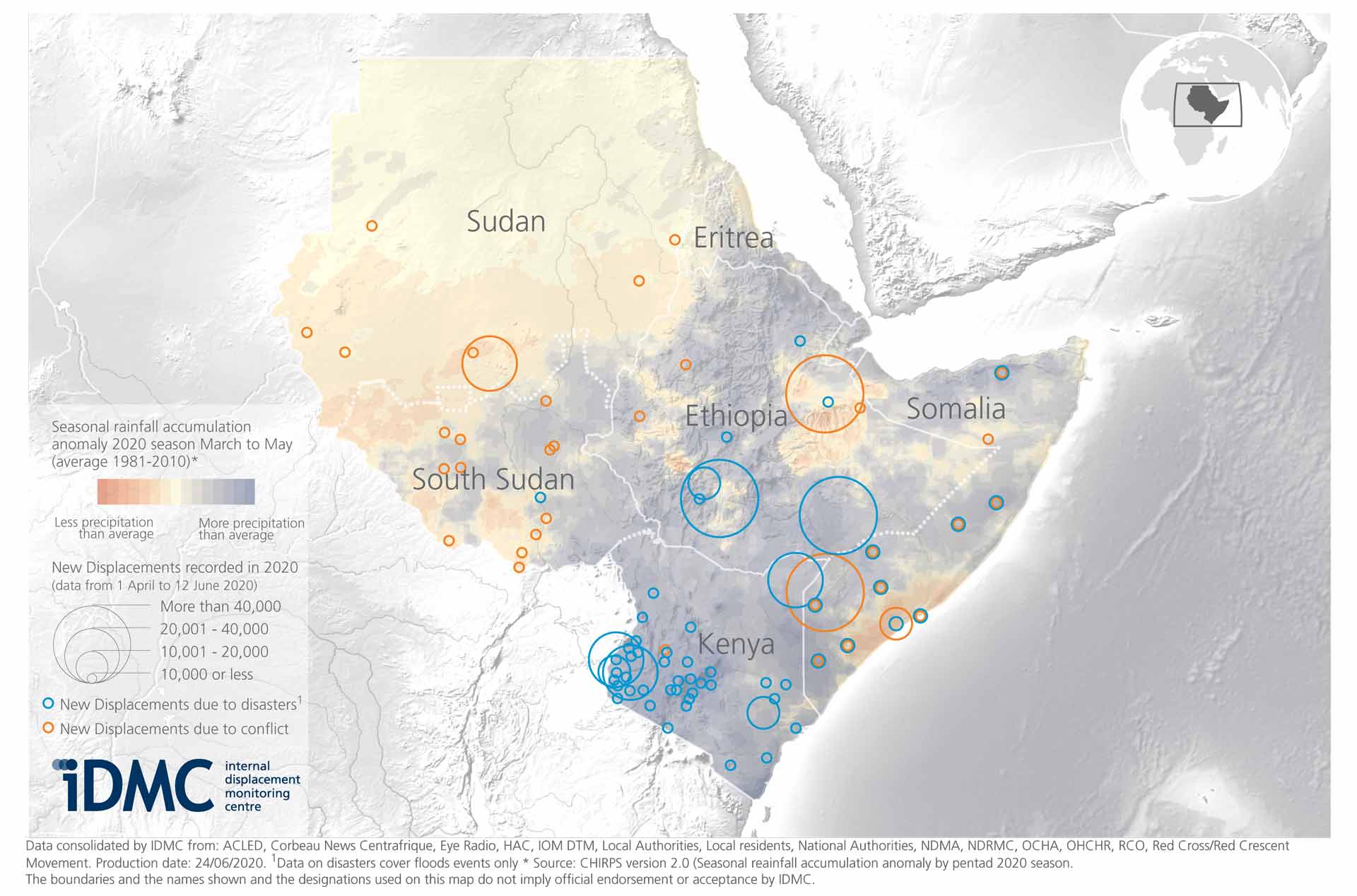 An unusually heavy rainy season has led to one million new displacements across Ethiopia, Kenya and Somalia between April and May 2020. In Kenya, this is one of the worst years since 1964 when tens of thousands of people were displaced from communities around Lake Victoria. The 2020 season, which is forecast to bring above average rains, is just beginning in Sudan and South Sudan and further displacements in the region are expected in the coming weeks.

Ethiopia, Kenya and Somalia have been affected by severe drought since 2016, interrupted by several very heavy rainy seasons, most notably between April and May 2018, October and November 2019, and April and May 2020. The floods wash away crops and kill large numbers of livestock, which in turn decimates people’s livelihoods and leads to mass displacement.

The floods have also exacerbated pre-existing vulnerabilities of IDPs in Somalia, as more than a quarter of the total 400,000 new displacements were individuals who had already been displaced and were sheltering in IDP camps. In Ethiopia, more than 300,000 people were displaced, mostly in the Somali region, which is regularly affected by flash floods that displace entire communities.

While the 2020 rainy season in eastern Africa is unusually severe, the situation has been exacerbated by the Covid-19 pandemic, which has disproportionately affected those who lost their homes and livelihoods to the flooding in April and May.

Ethiopia, Kenya, Somalia, South Sudan, and Sudan have recorded more than 23,919 cases of Covid-19 as of 26 June 2020 and the reported cases continue to increase daily. Infections among the internally displaced populations have been confirmed in Somalia, in North Darfur (Sudan) and in IDP settlements in Juba and Bentiu (South Sudan). However, as of today, transmission in the camps remains limited.

In recent weeks, Kenyan authorities have struggled to provide shelter to displaced populations in a manner that respects the social distancing requirements put in place to halt the spread of the virus. Local authorities have encouraged IDPs to stay with host families rather than moving to newly established shelters. In a way, the patterns of displacement in Somalia were also influenced by the pandemic as IDPs avoided some of the shelters that hosted people from different areas, for fear of overcrowding and the potential spread of infection.

For many, losing their homes also means losing their livelihoods. This has been the case for the displaced people in Mogadishu, Somalia. The pandemic has also resulted in an economic downturn which has pushed people further to the brink and may lead to further displacements of entire communities seeking assistance and access to basic services. At the same time, remittances sent to Somalia, which are deemed crucial to the economy, decreased by 50% because of the pandemic, which has had a very significant impact on people’s ability to pay rents, purchase medicines or foods. While Covid-19 has shown to have negative impacts on displacement and livelihood opportunities, food insecurity has also worsened across the region.

As a result of floods destroying livelihoods and the economic downturn caused by Covid-19, food insecurity has increased across the region. Prices of Sorghum (a type of cereal) are 200-350% above the five-year average in Sudan and South Sudan, and staple grain prices range from 50-100% above the five-year average in Ethiopia. Despite food cargo being exempt from movement restrictions in order to ensure continuity in domestic and regional trade, enhanced screening procedures, temporary market closures and panic buying have all contributed to supply chain disruptions and price increases.

Large-scale humanitarian food assistance needs are expected to persist throughout the region in 2020 and will likely reach their peak during June to September. Even more concerning, however, is the risk of famine in certain areas of South Sudan, where high levels of food insecurity and loss of income will most likely drive people to IDP settlements in search of assistance over the coming months.

Favoured by the latest rainy seasons in the Horn of Africa, which makes the region a perfect breeding ground, desert locusts pose a significant threat to food production. Most of the population in the region depends on agriculture for their livelihoods. According to the FAO, a 1 km2 locust swarm can eat the same amount of food in one day as about 35,000  people. This is a staggering and worrying fact that conveys the impact the locusts could have on pre-existing food insecurity.

Beyond the direct impact of reduced food production and destroyed crops for entire communities in eastern Africa, communities will also have to find new lands and sources of income and food elsewhere. These movements of populations in search for cultivable land and food may reignite tensions and inter-communal clashes between pastoralist communities in the affected countries.

Such potential clashes have already been observed in Kenya’s Samburu region where the vegetation has been severely impacted by the swarms. Pastoralist communities are now seeking alternative pastures elsewhere, which could prompt clashes with other communities.

This locust invasion will therefore likely have a long-term impact on the health, economy, and security of the region.

Ethiopia, Sudan, and South Sudan are in the middle of political transitions, with the added complication of implementing peace deals. The former has already postponed its election originally planned for August, leading to fears this this could lead to further tensions and violence. There are signs of delay in the transition schedules in Sudan and South Sudan too, as the countries struggle to contain coronavirus and prepare for the upcoming rainy season. An escalation of violence and resulting displacement is likely should the peace deal implementation be delayed. Both countries already experienced a surge in inter-communal violence in the past two months, in which hundreds of people lost their lives and thousands were displaced.

Somalia had planned its first democratic election in 50 years for the end of 2020 but doubts were swirling even before these compounded crises struck, given the power of individual federal states and lack of overall government control over its territory. For many, there are significant fears of the resurgence of violence and subsequent displacement.

What happens when disasters and epidemics meet?

Once again East Africa is experiencing a combination of severe droughts and heavy floods, which is no surprise due to its high exposure to climatic hazards and low resilience to withstand them. Despite the frequency of these events, the region may struggle to cope with the resulting impact of hundreds of thousands of people losing their homes and livelihoods. East Africa is also prone to disease epidemics, which put the fragile healthcare systems under immense strain. When disasters and epidemics meet, mass displacement ensues.

Political unrest exacerbates the situation and, should the current peace and transition processes fail, the region could easily fall back to widespread violence and more mass displacement. This unstable political situation is also a result of the governments’ difficulty responding to economic shocks, exacerbated by the Covid-19 pandemic, as well as the difficulty in ensuring the food supply for citizens, who are pushed to the brink by increased food prices and decimated livelihoods.

While the rainy season is coming to an end in Ethiopia, Kenya and Somali, heavy floods are now expected in Sudan and South Sudan. Locust swarms are also expected to multiply over the next few months, contributing to a risk of famine in certain parts of the region. Unless the countries concerned make a concerted effort to implement the transitional and peace processes, the region will remain very fragile and unprepared for future climate shocks and epidemics.