IDMC has been informing global policy-making on internal displacement since we were established in the late 1990s. We do so in an effort to put the issue on the agenda, by providing evidence and analysis that demonstrates the relationship between displacement and global issues as diverse as climate change, disaster risk reduction, sustainable development, state fragility and human rights.

Internal displacement is often not a consideration at the start of many global policy-making processes. At best it may be provisionally included, but may equally be dropped because of competing priorities. We get a seat at the table to advocate for the new policy framework – be it a binding global agreement, decision, summary or outcome document – to make explicit reference to the phenomenon.

Working with our main institutional partners we have enjoyed our share of success. In the last few years, internal displacement or internally displaced people (IDPs) have been referred to in the Sustainable Development Goals, the Sendai Framework for Action and most recently the UN climate change agreement reached in Paris in December 2015. The UN General Assembly also adopted another resolution on internal displacement in November 2015, which called for more action to be taken to address the issue.

This week’s World Humanitarian Summit (WHS) goes further by explicitly recognising internal displacement as a “complex political and development challenge”, and a significant issue of our time. Yesterday, NRC’s secretary general, Jan Egeland, spoke on a high-level panel on forced displacement, and called on national governments to ensure that IDPs are not forgotten in policy and operational efforts to prevent and respond to the phenomenon and find sustainable solutions for those forced to flee their homes.

We welcome the UN secretary general's report on the WHS. Drawing on our research and evidence, it gives internal displacement prominence and proposes that governments “commit to a comprehensive global plan” to reduce the phenomenon “in a dignified and safe manner by at least 50 per cent” by 2030. The call was echoed this weekend by the UN’s emergency relief coordinator, Stephen O’Brien, in an op-ed piece for the Times of Malta.

With such recognition and political support already secured, one might be tempted to think that our work at the WHS is done. Unfortunately, this is not quite the case.

Given the record 40.8 million people displaced by conflict and violence as of the end of 2015, there is little doubt that the current level of humanitarian engagement is insufficient. As the graph below shows, the number of such IDPs has been rising fairly steadily for the last 13 years. The first order of business must be to reduce the flow of new displacement, which means addressing the factors that put people at risk. 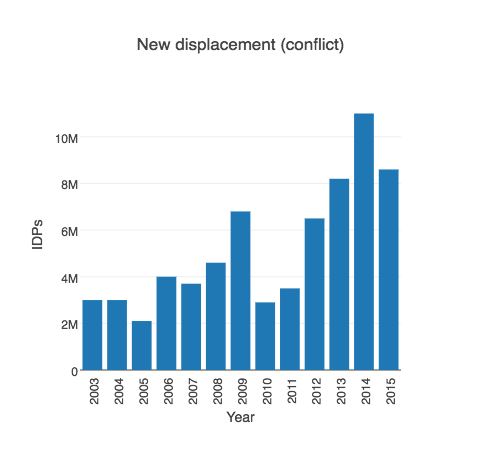 This approach is consistent with that proposed by the UN secretary general in his report, which calls for national governments and regional and international organisations to “increase their capacity to analyse risks and monitor deteriorating situations” and then to act accordingly in a timely and effective manner. This implies longer-term thinking, both before and after crises, which will also compel humanitarians to work more closely with their counterparts in the development sector.

Think holistically, regardless of cause

It will be impossible to halve the number of IDPs by 2030 unless we have an accurate baseline figure for those forced to flee their homes. Unfortunately, as our Global Report on Internal Displacement (GRID 2016) reveals, such a figure does not yet exist. A lack of data on certain aspects of displacement means there are blind spots in our coverage. Despite it being the highest figure we have ever recorded, 40.8 million by no means represents the total number of IDPs as of the end of 2015. Those displaced by disasters, development projects and other forms of violence are not included.

We recommend that national governments and other partners begin to collect data on displacement systematically, regardless of its cause. If governments lack the capacity to do so, international organisations, civil society, research institutions and others should be given the freedom, resources and training necessary to carry out the task.

Better data on the end of displacement

As Chaloka Beyani, the UN secretary general’s special rapporteur on IDPs’ human rights said at the launch of the GRID 2016 last week: “It’s not just about reducing the number of IDPs, it is about finding durable solutions to displacement.”

Despite ongoing initiatives, no standardised and internationally recognised means of assessing progress toward durable solutions exists. Such benchmarks should be identified, tested and adopted so that return, local integration, return and settlement elsewhere can be accurately measured and consistently monitored across all situations. Data on other factors such as births and deaths in displacement also needs to be collected. Perhaps most importantly, data on internal and cross-border displacement needs to be collected differently, as the way it is currently gathered means significant numbers of IDPs are also counted as refugees.

We hope the world leaders gathered today in Istanbul will acknowledge the long road still ahead, and come up with the solutions needed to address the growing complexity of the displacement crises we see in the world today. The World Humanitarian Summit is an opportunity to multiply and resource global efforts to prevent, respond to and end displacement worldwide. From our side, IDMC commits to expanding the provision of knowledge relevant to policy-making and operational planning, and to providing ever more comprehensive and accurate data that can inform and shape better responses to IDPs’ needs. Our ability to do so, however, will depend on the strength of our partnerships, and on states’ continued support of these efforts. We call on all states to take this responsibility seriously, and to make concrete commitments towards this objective during the summit.