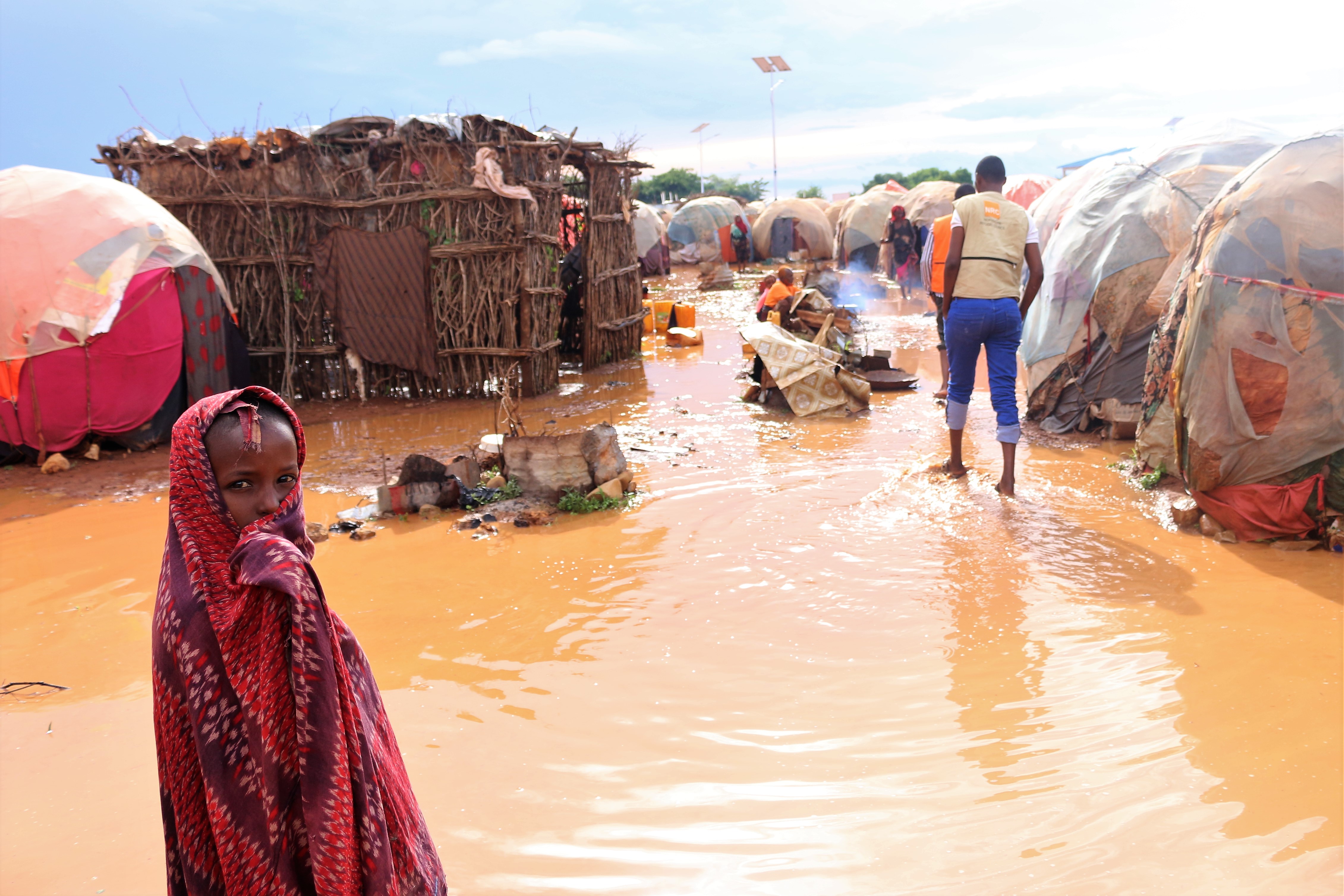 Flooding due to the heavy rains made shelters unlivable in one of the many camps for displaced people in Baidoa, Somalia. Photo: NRC/Adam Nur Omar, April 2018

After two years of severe drought and several poor rainy seasons, communities in Ethiopia, Somalia, and Kenya were struggling to keep their livestock alive and to earn a living. However, when the long-awaited rains arrived in April 2018, they brought not relief but more hardship in the form of historic floods, bringing already vulnerable communities almost to their knees.

The three countries have been affected by the worst floods in the last twenty years. In parts of Somalia, it’s the worst flooding in the last half a century. As a result, individuals, communities and humanitarians are struggling to cope with their consequences. More than 700,000 people have been displaced in the last five weeks, nearly half of them in Kenya alone. Almost the entire territory of Kenya has been flooded, most of south-east and south-west Somalia, and parts of Somali and Oromia regions in Ethiopia. The heavy rains are set to continue throughout May. 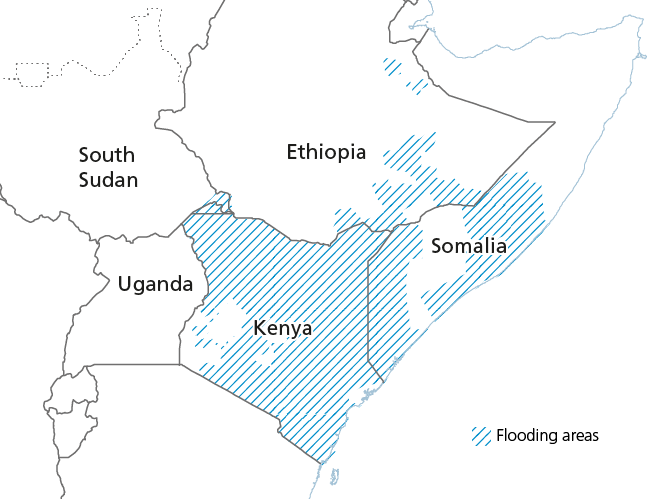 The most affected counties in Kenya are those on the coast – Tana River, Kilifi, Lamu and Garissa – as well as those in the north – Turkana and Mandera. In Tana River alone, nearly half (about 120,000) of the population of the county was displaced. Turkana and Garissa are currently fighting a cholera outbreak, while Kilifi and Lamu are affected by a chikungunya outbreak. Floods often accelerate the spread of cholera when water becomes contaminated due to compromised sanitation facilities and the difficulty of maintaining levels of hygiene. They spread chikungunya, a mosquito-borne disease, by proving better conditions for mosquito reproduction.

As feared, the initial assessments indicate that major water systems have been damaged or destroyed, including sanitation infrastructures. Just as alarming, at least thirty hospitals are inaccessible, meaning that if people do become sick the health systems may have difficulty coping. At the same time, heavy rains continue, which creates large breeding sites for mosquitos.

At the same time, humanitarian agencies have struggled to access displaced communities because of destroyed roads and they fear cholera and chikungunya outbreaks may spread fast among the IDPs who are currently staying in provisional - and in some cases overcrowded - shelters.

Somalia experienced a spike in displacement last year due to severe drought, when hundreds of thousands of people were forced to flee in search of water, food and livelihoods. The shelters they received were not built to withstand heavy rains, and as a result many IDPs have become displaced a second time by the floods.

A large majority of these IDPs became displaced last year because they lost most of their livestock and productive assets. Many fear that the current floods have destroyed what little they had left or were able to accumulate while displaced. The food security outlook has gone from bad to worse due to expected curtailing of food availability and food access: most of the farms along the Juba river are under water and large areas of crops have been destroyed across the south-east and south-west of the country. At the same time, the market prices are increasing because of impassable roads and other challenges in moving goods, as well as increased activity of armed groups in the area. This situation is likely to force more people from their homes in search of food and safety.

Displacement in Ethiopia reached new heights in 2017 due to increased armed activity in Oromia and Somali regions, as well as severe drought which displaced hundreds of thousands of pastoralists. The same two regions are now affected again, this time by heavy flooding, and people are fleeing their homes once more. Not all zones have been assessed so far, but the number of displaced is already above 170,000. Hospitals and schools have been damaged and several evacuation centres report a lack of sanitation facilities, leading to contaminated water and increasing the risk of cholera.

The severity of the flooding has rendered IDPs and host communities inaccessible. This has hampered both the disaster assessments and responses, as supply chains have been disrupted and humanitarians cannot reach people in need with assistance.

The disasters which have affected the Horn of Africa in the past years serve as the proverbial canary in the coal mine. The region is projected to be among the worst affected by the effects of climate change, with severe droughts followed by heavy floods expected to become a new normal. However, with each new disaster, the local communities become more vulnerable and their coping strategies further erode which increases the likelihood of displacement.

The national and local governments, as well as humanitarian and development organisations, must be prepared for such new climatological trends and help local communities to prepare and cope with them through disaster risk reduction, as well as through better data and analysis of the weather trends and their impacts. At the same time, the risks of flood- and drought-related displacement in this region need to be well known and understood. IDMC, in partnership with the UNISDR office in Nairobi, has published a report, developed tools and convened workshops to help raise awareness of these risks.

Banner: Flooding due to the heavy rains made shelters unlivable in one of the many camps for displaced people in Baidoa, Somalia. Photo: NRC/Adam Nur Omar, April 2018