Durable solutions to displacement must include mental health 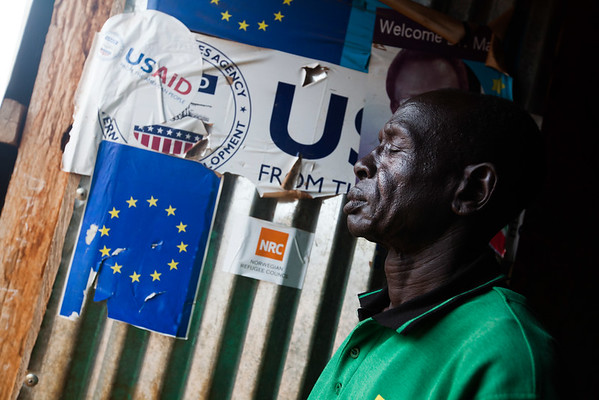 Gatluak, who has 4 wives and 7 children, has been living alone in a displaced camp in Juba, South Sudan, for several years, while his family found refuge in Gambella, Ethiopia. NRC/Albert Gonzalez Farran, 2016.

Today is World Mental Health Day and an opportunity to raise awareness on an issue that most people affected by internal displacement consider a priority, but few aid providers focus on.

The event that triggers displacement, be it conflict, criminal violence or the destruction of one’s home by a natural hazard, is in of itself a trauma that should be addressed, but rarely is when people are on the move. Humanitarian actors’ focus on immediate life-saving interventions, a degradation of displaced people’s financial resources and the unavailability of mental health professionals in host areas are frequent barriers to psychological support. In low- and middle-income countries, where most conflict-related displacement occurs, access to mental healthcare is limited for everyone.

In addition to the original trauma, displacement comes with significant challenges to stability. For children and older people, in particular, a sudden change in the habitual place of residence, environment and community, and separation from friends and sometimes family can be an overwhelming shock. In the suburbs of Mogadishu, Somalia, teachers report that previously nomadic children who had to leave their rural home to move to the city because of drought are unsettled and stressed by the noise of their new environment.

The impacts of internal displacement on mental health are hard to measure, yet quantitative measures are necessary to plan for support. We know now that one-in-five people living in conflict-affected areas suffers from a mental illness, but we have no specific information for people living in internal displacement because of conflict, violence, disasters or other causes.

From July to September 2019, IDMC led three research projects in Somalia, Kenya and Ethiopia to measure the impacts of internal displacement on health, education, livelihood, housing and security. These studies focused on providing practical, quantitative information for aid providers to use in planning their future operations. Through a standard but adaptable survey, this research highlighted consistent impacts on the mental health of displaced people, as well as contextual specificities.

In Kenya and Ethiopia, the internally displaced people (IDPs) surveyed had all been uprooted by conflict and violence: the 2007 post-election violence in Kenya, and recent ethnic conflict in the Somalia Regional State in Ethiopia. For both groups, over half of the sample reported feeling worried, nervous, anxious or sad more often now than before they left their home.

“The main health issues for IDPs here are trauma, stress, hypertension, high blood pressure, suicide, depression, ulcers, lack of counselling. No psychological support is available. There used to be an NGO that provided short-term support once a year, but they have now stopped.” Testimony from a social worker in Naivasha, Kenya.

Over 40 per cent of the IDPs surveyed in Ethiopia, when asked if they wanted to share any additional comments at the end of the interview, specifically referred to the violence they have witnessed or suffered from, the loss of their relatives and friends in extremely violent circumstances, including torture, disappearances and mutilations. Many spoke of the psychological trauma they now face, a testimony that aligns with information from the host community, teachers and health practitioners.

“They are easily upset and respond to situations in a seemingly aggressive way. We have observed problems relating to traumas. For example, we had a student [of whom] it was said that his father was slaughtered in front of him. This child had irregular attendance and eventually had to leave school as a result of mental health problems. Such cases are observable, and there are times when some students faint in school. We have faced such losses of consciousness all year. It is especially common among grade 5 students where there is fear of taking exams. Some students often lose consciousness one minute after exams started. We have observed the problem on internally displaced children only.” Testimony from a teacher at the public school inside the IDP settlement.

However, interestingly in Somalia most surveyed IDPs feel less worried, nervous, angry or sad now than before they were displaced. All had to abandon a pastoralist life because of the drought in 2017 or 2018 and moved to the Banadir camp near Mogadishu. Reasons for this improvement in their mental well-being should be investigated further but the survey recorded increased access to to health care and education in their urban host area, which could be on of the positive consequences of their displacement.

Reports are more consistent across host communities in all three countries, who were asked the same question. In Somalia, Ethiopia and Kenya, surveyed hosts feeling worried, nervous, anxious or sad more often now than before IDPs arrived in their neighbourhood or home are more numerous than those feeling so less often. When asked to explain their answers, they mentioned an increased perception of insecurity, referring to more frequent theft, tensions with IDPs, overcrowding and a rise in the price of rents and goods. Yet in Somalia, the percentage of surveyed host who feel no difference since the arrival of the IDPs is the same as those who feel worried, nervous, anxious or sad more often, while in Ethiopia it is even higher.

These first studies of the impact of internal displacement on the mental health of IDPs and hosts show that the issue should be treated as a priority in many cases, but also requires tailored responses depending on each context. Further analysis of this and other impacts of displacement in Somalia, Ethiopia and Kenya will be published in the next few months.

Banner: Gatluak, who has 4 wives and 7 children, has been living alone in a displaced camp in Juba, South Sudan, for several years, while his family found refuge in Gambella, Ethiopia. NRC/Albert Gonzalez Farran, 2016.