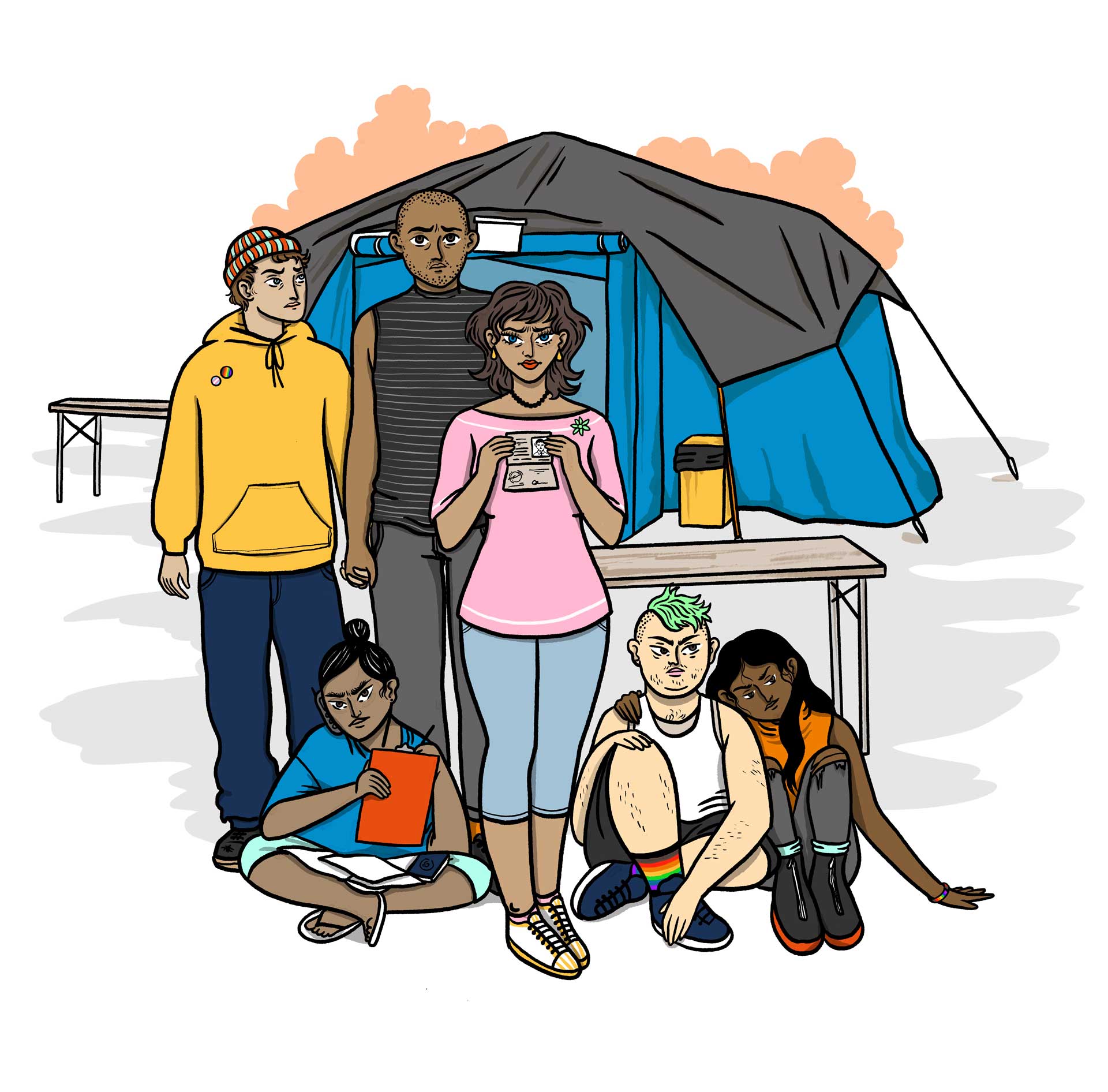 June is Pride month in many countries worldwide, celebrated with public events and stories of LGBTIQ (lesbian, gay, bisexual, transgender/ transsexual, intersex and queer/questioning) history and contemporary life. For many internally displaced people (IDPs) in LGBTIQ communities, the month will be less celebratory. Some may have been displaced due to their LGBTIQ identity, and life in displacement has unique challenges for them. In this blog we bring attention to this often-ignored group and discuss ways to improve data related to LGBTIQ IDPs.

IDMC’s Global Report of Internal Displacement 2021 estimated that there were 55 million IDPs worldwide by the end of 2020. Of the ten countries with the highest number of IDPs, homosexuality is punishable by imprisonment or a possible death penalty in eight of them, according to The International Lesbian, Gay, Bisexual and Trans Association, namely: Afghanistan, Ethiopia, Nigeria, Somalia, South Sudan, Sudan, Syria and Yemen. Fifty-one per cent of all IDPs live in these eight countries. Colombia is the only country of the ten which has broad protection against discrimination based on sexual orientation. Consensual same-sex sexual acts are criminalised in a total of 70 countries worldwide.

We do not know how many IDPs identify as LGBTIQ

Due to discriminatory laws and practices related to homosexuality, and a lack of recognition of transgender, non-binary, intersex, queer and asexual people in most countries, the proportion of the global population who identifies as LGBTIQ is unknown. Estimates of the global population that are lesbian, gay and bisexual range from 1.2% to 3.5%, and between 0.05% to 1.7% for intersex people. Applying these estimates to the IDP population means there could be between 660,000 and 1.9 million lesbian, gay or bisexual IDPs, and between 27,500 and 935,000 intersex IDPs. It is also possible that LGBTIQ people are overrepresented among IDPs as they are often a target of violence which can lead to displacement.

Once displaced, LGBTIQ people also face additional challenges including a lack of access to relief assistance and housing, and ongoing violence. According to the World Bank, transgender people are the most at risk group in displacement situations, as the story of Zashy Zuley del Cid Velásquez in El Salvador shows. Del Cid, a transgender woman, was forced to move from her home after she was rejected by her family and sought refuge in the city of San Miguel. She was then targeted by the MS-13 gang for being transgender and threatened with violence if she did not leave. Displaced again, del Cid was unable to find a safe space elsewhere and returned to San Miguel, where she was shot and killed in April 2021. This is not an isolated experience. COMCAVIS TRANS, a Salvadoran NGO working for LGBTIQ rights, estimates that there have been at least 600 killings of LGBTIQ people since 1993, and there were 151 internally displaced LGBTIQ people in 2018-2019. The situation has been exacerbated by Covid-19.

Better data is needed, and should not put LGBTIQ people in danger

Improved data on LGBTIQ people in internal displacement is important to respond to these challenges, which prompts the question: how can this data be collected so as not to put people in added danger? And how can data collection tools encourage honest responses? Firstly, anonymous, self-administered questionnaires are more likely to elicit an honest response than a personal interview. Secondly, the language of ‘LGBTIQ’ is not used in all contexts, and consultation with LGBTIQ organisations is key to ensure appropriate terminology is used to ensure respondents feel comfortable answering questions. For example, the option of ‘third gender’ was added to a survey following the Nepal earthquake in 2011 when ‘Methi’ or ‘Kothi’ would have been more appropriate. Lastly, stringent data protection protocols should be in place and clearly communicated to participants. Excluding identifiers such as date of birth or precise location protects the identity of individuals.

Better data is possible, even for hard to reach populations such as LGBTIQ IDPs, and is necessary to reduce the compounding difficulties of displacement. IDMC is committed to highlighting the experiences of IDPs that are LGBTIQ, through initiatives such as the Hidden in Plain Sight research area, and is committed to improving data disaggregation in primary data collection to better identify the specific needs and perspectives of displaced LGBTIQ people.