How many internally displaced Rohingya are trapped inside Myanmar?

It took a massive outflow of Rohingya Muslims for the world’s attention to re-focus on the violence in Myanmar. Reports of razed villages and attacks on civilians has prompted the UN Secretary’s General to describe Myanmar’s ongoing military campaign against the minority group as “a textbook example of ethnic cleansing.”

It is now estimated that more than 606,000 people have fled from Myanmar to escape attacks on their communities in the western state of Rakhine, more than 400,000 of them since late-August alone (see graph below). So, we know the number of arrivals in Bangladesh. We also know that a significant proportion of Rohingya villages have been destroyed as an effect of “scorched earth” tactics used by the military.

Pre-crisis estimates of the Rohingya population place the number of this ethnic minority at roughly a million people, so we deduce that many Rohingya must still be internally displaced within Myanmar, probably in areas close to the border. However, we don’t know how many or in what conditions. 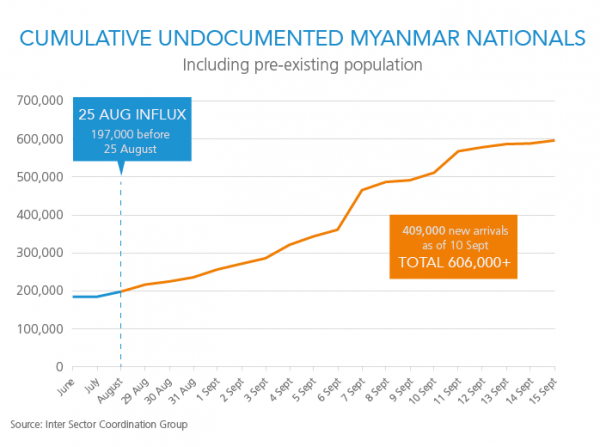 Why we think some Rohingya are still displaced internally

There’s no question as to why people are fleeing. Satellite imagery shows that entire Rohingya villages have been set ablaze and destroyed. Human Rights Watch has reported the near total destruction of 214 villages in Rakhine state. The government reports that around 7,000 houses have been burnt down and that 176 villages have been “completely emptied”.

What remains unclear is how many people have escaped Myanmar, and how many are still inside the country. On one hand, we have clear evidence of a displacement “outflow” from the violence along the border: the faces of hundreds of thousands of men, women and children showing up in Bangladesh. On the other hand, we have reports that some people struggling to reach or get across the border.

The magnitude of the cross-border flows to Bangladesh, coupled with reports that many Rohingya are frustrated in their attempts to leave the country, makes it highly likely that significant numbers of Rohingya are internally displaced in Myanmar. 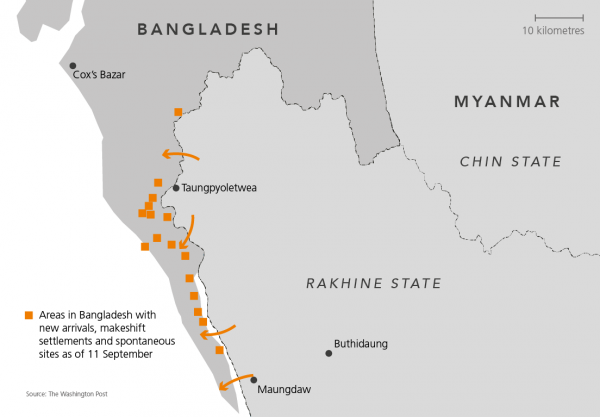 There are many reasons for the lack of credible data on displacement flows in this crisis.  For one, humanitarian access is limited, which makes it difficult to verify any information coming out of Rakhine state. The UN is reporting that they can’t independently verify any numbers of internally displaced people (IDPs), which is a strong indication that we need to be cautious about any estimates we see.

There are also very few partner organizations that could independently verify displacement estimates provided by the government, which focuses only on the number of non-Rohingya displaced by the violence. For example, the initial government figure of 26,747 IDPs was picked up by Amnesty International, ACAPS and multiple media sources. This figure also forms the basis of IDMC’s most recent Internal Displacement Update. Since then, according to media coverage, the government has reported that a total of 30,000 non-Rohingya civilians were displaced by the violence, and that nearly 4,300 of them have returned to their homes. This further highlights the challenge of gathering Rohinga figures, in the absence of any from the government.

No news is not good news

If humanitarian organizations don’t even know how many or where people are, much less the situations in which they are in, it is impossible to tailor an effective response to their needs. The Secretary General of the Norwegian Refugee Council, Jan Egeland has described Rakhine state as a “full-blown humanitarian crisis that warrants a large-scale response.” Without full and unimpeded access to the communities affected, however, people in Rakhine state could remain trapped in a dire crisis indefinitely.

This opinion piece, written with support from Marta Lindström, was originally published by the Thomson Reuters Foundation, see the original here.