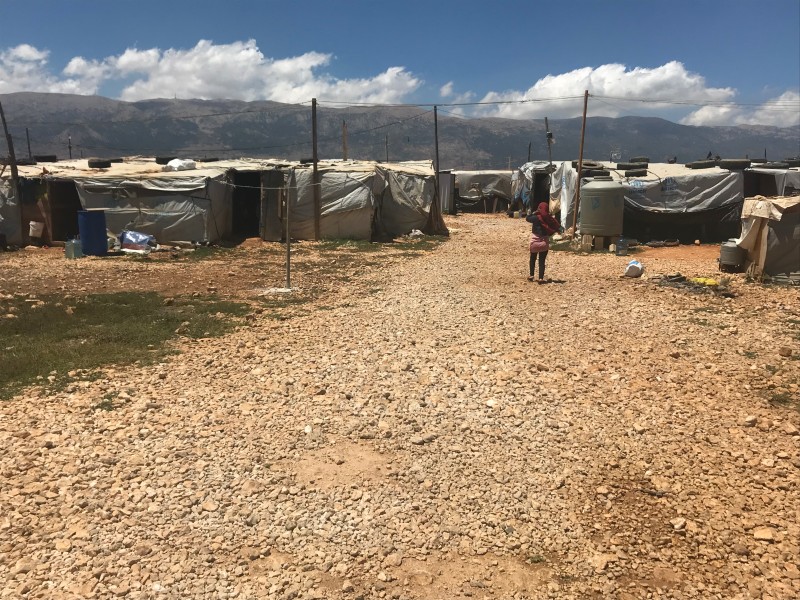 Ghosn and Braithwaite are co-investigators on a Minerva initiative project funded by the Department of Defense and the US Army Research Office*. Based on deep case analyses and surveys of former Lebanese displaced from the Lebanese Civil War and current Syrian refugees in Lebanon, they are currently investigating why individuals flee conflict zones, how they determine which route to take, and what effect they have on the security and stability of the destinations at which they settle (see published article 1 and article 2).

Two trends are common to discussions of displacement during conflict. Arguably, neither reflects the situation on the ground. First, most maps representing the journey of displaced people display arrows flowing in one direction: out of the country of origin. Second, most observers distinguish individuals escaping from conflict zones as being either internally displaced people (IDPs) or refugees, but never as both. However, experiences on the ground are more complex.

Talking to IDPs from the Lebanese civil war (1975-1990) and refugees from the current Syrian civil war, several common factors emerge as guiding individuals’ decisions as to when and where to flee, reflecting the similarities in their experiences and making the distinction between the two categories murkier.

Why do individuals flee?

A comparison of displacement experiences during the Lebanese and Syrian civil wars reveals similar factors underlying decisions to flee.  Decisions were driven by individual experiences, local conditions, and actions taken by others within social networks.

Lebanese IDPs
In our survey of more than 2,000 Lebanese residents completed in Summer 2017, over a third of respondents identified as having been displaced during the fifteen-year civil war. As many as 44% of respondents were shot at, exposed to shelling, physical assault/torture, and/or abduction. Even among those who did not experience violence directly, 70% were aware of violence nearby within their district. Accordingly, respondents identified a variety of reasons for leaving their homes: security threats (e.g. warned/forced to leave), acts of violence (e.g. indiscriminate shelling; death of a family/community member), difficult economic situation (lack of work opportunity), and lack of basic needs (no access to food or medical attention).

Illustrating how different triggers can result in multiple movements, one focus group participant indicated that bombings and shelling nearby prompted him to move to the home of a relative equipped with a bunker. When news reached them of a massacre and the kidnapping of women in a nearby town, everyone decided to leave. One individual had a lorry and was able to take more than 50 people with him. Within hours, the whole town had been emptied.

Among respondents, the top three reasons for leaving home were economic hardship, security threats, and the desire for family reunification. In focus group discussions with 45 refugees living in camps, it became clear that many had been displaced internally in Syria, many even before the conflict began. This was because of drought that was ongoing since 2001 that had cost many their main source of income.

To where do individuals flee?

Where individuals flee to is driven by practical considerations, as well as information received through their social networks. Whether people were fleeing within the country or across the borders, similar factors influenced their choice of destination.

Lebanese IDPs
When asked why they chose the area that they relocated to, respondents’ answers clustered into four categories. First, they sought the nearest safe place. Individuals indicated that while it was not safe to stay in their homes, they could not go too far as they had left family members and property behind and thus wanted to be able to go back and check on both. Also, some maintained that they needed to stay close to their work, while keeping their family safe. Second, they moved to familiar places: their original hometown, their spouse’s hometown, or somewhere with family members or friends.  Third, they aimed for locations with work opportunities. Fourth, destinations had similar sectarian backgrounds.

Several individuals in the focus groups discussed travelling to multiple destinations during the conflict. One individual and his family first relocated from East Beirut to a suburb of Beirut before moving to the South. They then relocated to Syria and then back to another area of Lebanon. Another individual indicated that his family relocated from one neighborhood in Aley to another, then to Hamana then to Beirut, then back to Aley. His family refused to leave Lebanon.

Syrian Refugees
Similar to their Lebanese counterparts, many Syrians were displaced to multiple places. About 12% indicated that they had been displaced within Syria before traveling to Lebanon. One respondent traveled from Homs to Damascus, then from Damascus to Tripoli, Lebanon.

In Lebanon, geographic proximity and ease of border crossing allows individuals to go back and forth to check on family members, as well as their property. One individual stated that when a militant group entered his hometown he decided to smuggle his two eldest daughters out as they were forcing all boys and girls into military conscription. This meant leaving his wife and two younger children. However, using a smuggling network between Lebanon and Syria, he was able to return home every couple of months to check on his family.

The decision to flee is never easy. The overwhelming majority of those who do, wish to one day return home. However, the return journey is complicated.

Although our survey of Lebanese IDPs from the civil war showed an average displacement of 7 years, some individuals did not return home for over 40 years, and others have yet to return. Several factors have delayed or prevented people from being able to return home: lack of reparations to rebuild their homes, feelings of insecurity, especially in areas of sectarian conflicts, and acclimation to their new location.

As for the Syrian refugees, about 60% of those surveyed indicated their desire to return home; only 18% maintaining that they would not return under any circumstance. During focus group discussions, the overwhelming majority stated that they regretted their decision to flee across the border and wished they had stayed within Syrian territories.

How long will it take these Syrian refugees to return? Based on the Lebanese experience, it is likely that some will remain displaced many decades in the future. Those who do return, meanwhile, will need to be supported in order to achieve durable solutions in their country of origin.

*Opinions expressed are those of the authors and should not be attributed to the Department of Defense or the Army Research Office/Army Research Laboratory.

Happy New Year from IDMC's Director
Media Centre
Global food insecurity is on the rise, so is internal displacement. What is the relationship?
Expert opinion
Assessing the severity of displacement situations: data gaps and ways forward