Indonesia: A prime example of how robust data can reduce flood displacement risk

Producing accurate estimates of the scope, scale and impacts of disaster displacement and predicting future movements is difficult in many countries, given a lack of adequate reporting, differing concepts and metrics, and insufficient geographical coverage. Indonesia, however, is an exception.

The country's National Disaster Management Agency (BNPB) maintains a publicly available database on losses (DIBI) that includes information dating back to 1990 on the number of evacuations, affected people and destroyed housing for specific locations. This kind of systematic reporting enables the production of robust figures and analysis.

Disasters trigger significant displacement in Indonesia, and floods tend to force more people to flee their homes than any other hazard. They tend to be particularly severe during the rainy season, which normally runs from October to March, and most displacement takes place in January, February and December, the months when the highest rainfall tends to be recorded. 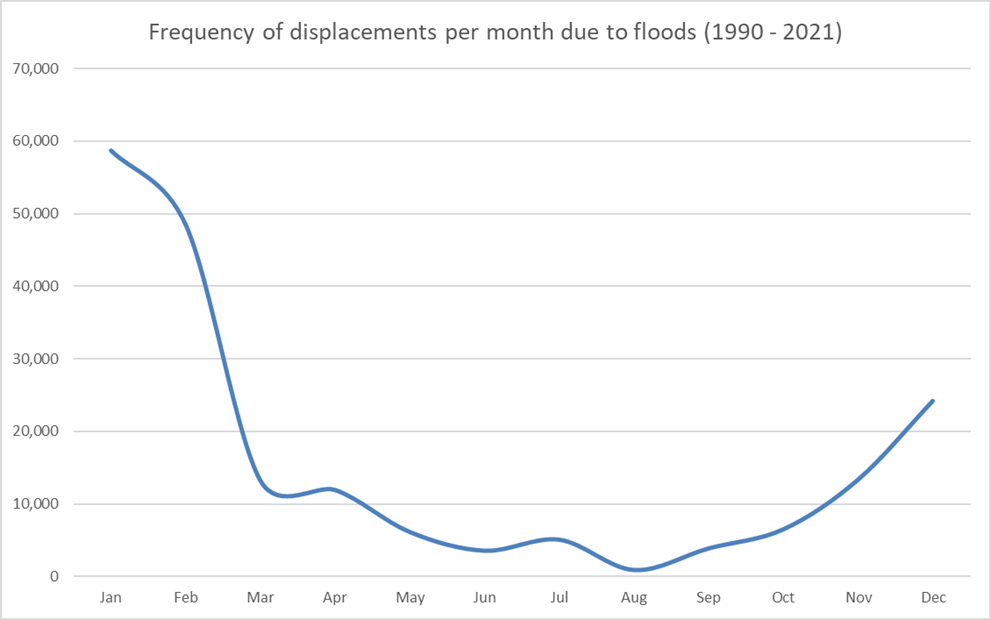 Displacements usually begin in Aceh at the beginning of the rainy season and are later recorded in West Java, West Kalimantan and Greater Jakarta Metropolitan provinces between January and February.

Floods accounted for 82 per cent of the 749,000 disaster displacements recorded in Indonesia in 2021. South Kalimantan province suffered its worst flooding in 50 years between 12 and 16 January, when almost 190,000 displacements were reported across 11 regencies. As in previous years, floods across the country were particularly severe during the rainy season, and its annual recurrence leaves little time for those who flee to recover, potentially pushing them into prolonged or repeated displacement.

Human activities including deforestation, land degradation and unsustainable urbanisation have increased the risk of floods and associated displacement. The illegal pumping of groundwater from under Greater Jakarta in particular has caused the area to sink, making it so prone to flooding that parliament passed a bill in January 2022 to relocate the capital to East Kalimantan.

Historical data helps to predict future displacement so that disaster management authorities can better prepare. Plotting past trends alongside the displacement recorded in 2022 shows how closely related they can be. 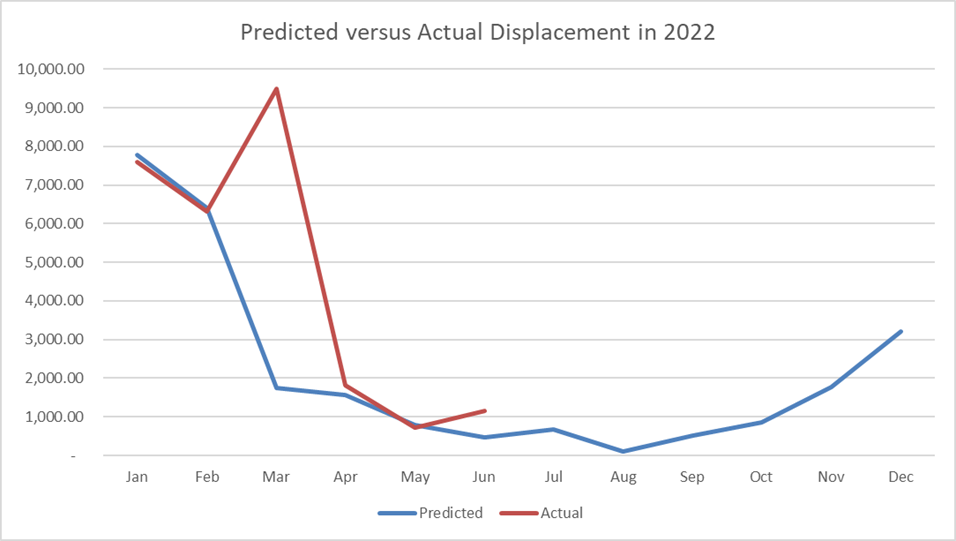 Predicted and actual displacement for January and February were closely aligned, but there was a significant divergence the following month, when a flood in Central Java caused large numbers of people to flee. Heavy rains that began on 15 March led five major rivers in Purworejo regency to burst their banks, triggering more than 6,000 evacuations in what was the largest displacement event of the month.

Climate change is already believed to have affected the onset of the monsoon in south and east Asia, and it may also be prolonging Indonesia’s rainy season well into March. Consistent reporting on flooding and the displacement it triggers will help to gauge whether events such as the one in Purworejo are outliers or if a new trend is emerging that may require changes to risk reduction policies.

Given the prospect of climate change intensifying hydrometeorological hazards across the region, including increases in the average peak flows of monsoon-fed rivers, it is vital to understand how seasonal floods may affect displacement. Indonesia’s approach is a prime example of how the systematic collection, management and disaggregation of data can be used to inform policies to mitigate displacement risk.

In line with the Bali Agenda agreed at the latest Global Platform for Disaster Risk Reduction, continuing to improve the quality and availability of data will help Indonesia to strengthen its early warning systems and better target resources, so minimising the displacement that floods trigger, particularly among its most vulnerable communities.