Lives across the frontline: internal displacement in a divided Ukraine

The world was blindsided in the spring of 2014 when images of tanks, airstrikes and fleeing civilians began flooding out of Ukraine, until then a stable and middle-income country in eastern Europe. The conflict was triggered by Russia’s unilateral annexation of Crimea, an autonomous republic in Ukraine, and escalated when pro-Russian separatists declared independence in the eastern regions of Donetsk and Luhansk shortly thereafter.

Three years later, Ukraine has become Europe’s forgotten war, sometimes described as a “frozen conflict”. In reality, the conflict is anything but static. Despite years of negotiations and the 2015 Minsk II ceasefire agreement, frequent shelling and hostilities have become a fact of life for millions of people living near the line of contact between the independent regions and the rest of the country.

When the conflict erupted, many people grabbed what they could and raced to stay with friends and family members in the west, certain the war would soon fizzle out. Now, families have come to grips with the potential permanence of the situation, and are re-evaluating the best way of making a living in their new surroundings.

Armed clashes and human suffering alike concentrate along the contact line, a 500 kilometer boundary and frontline of the conflict dividing territory controlled by the self-declared “Donetsk People’s Republic” and “Lugansk People’s Republic” from the rest of Ukraine (see map). Makeshift checkpoints have been set up at abandoned gas stations or other buildings along the line, effectively splitting the country in two.

The contact line is not an iron curtain; every day, up to 36,000 people, many of whom were displaced by the conflict, cross through the five available checkpoints between Government-Controlled Areas (GCA) and the eastern Non-Government Controlled Areas (NGCA). People go back and forth to visit their families, check on their homes or property, buy food and supplies or access their social benefits.

For a document check to cross the contact line, people wait in line for hours, facing temperatures ranging from -30° to 50°C; several older people died from heatstroke whilst queuing earlier this year. There are lists of what can be brought across the border, leading to arbitrary holdups and blocked medical supplies.

A ten-minute observation of the pedestrian checkpoint at Stanytsia Luhanska sets off a symphony of alarm bells. A nervous mother with a young child pecks her way to the front of the line. An old man covered in dust is carted across the parking lot in a wheelchair, having crossed the border from the NGCA. An impossibly frail older woman hands money to a younger man who had carried her bag for her. The long line of people winds around a makeshift bunker dug into the ground that could house up to a 100 people in case of sudden shelling.

Despite these risks at the checkpoint, people simply have no other option: the fields, forests and riverbanks shrouding the rest of the contact line are riddled with landmines and unexploded ordnance, so these passageways are the only safe way for people to cross from GCA to NGCA or vice versa. 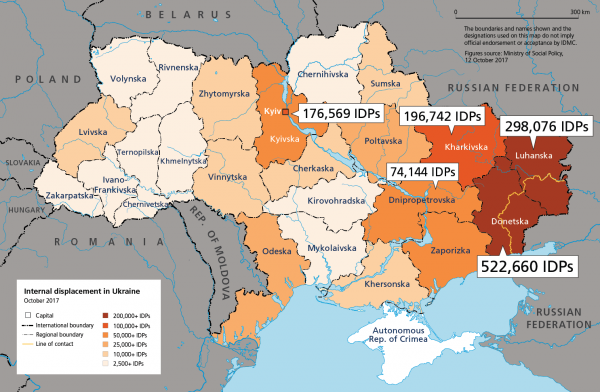 Hindering instead of helping

The courage of those affected by the crisis should be met with an earnest and effective response from the national government responsible for protecting them. Instead, many people feel like the Ukrainian government has created obstacles instead of removing them.

Case in point: Ukrainians are now required to move to government-controlled areas and register as internally displaced people (IDPs) in order to receive their rightful pensions. The effects of linking pensions to IDP registration policy snowballed quickly, and from January 2016 to April 2017 the number of pensioners dropped by more than 560,000 people, many because they failed to verify their IDP status or did not receive their IDP certificate proving their status.

In addition to this direct impact on individuals, the government’s policy linking IDP status to social benefits blurs an already complex picture of the number of people who have been uprooted by the violence.

According to the Ministry of Social Policy, there are roughly 1.6 million people officially registered as IDPs in Ukraine as of October 2017, amounting to four per cent of the country’s total population of 42.5 million. However, a potentially large proportion of this figure -- some sources say more than half -- are actually residents of NGCA who were never displaced but were forced to register as IDPs to continue accessing their pensions and other social benefits.

Disentangling who is an IDP with a specific set of displacement-related needs from this wider group of pensioners and other citizens who are registered as IDPs is a huge challenge, but a crucial clarification for tailoring an effective response.

With no clear prospects of conflict resolution or long-term planning, internal displacement in Ukraine is very likely to be further protracted. There is also a risk of repeated displacement if the security situation deteriorates or if IDPs’ access to local services and assistance continues to diminish.

A high-level workshop organized by OCHA and UNHCR while we were in Kyiv discussed national-level commitments and the “New Way of Working” to address this reality. The meeting was convened to introduce the results of an OCHA-commissioned report, Breaking the Impasse: a new approach to addressing protracted internal displacement, including a case study on the situation of Ukraine, and breakaway groups workshopped a set of collective outcomes to guide government ministries, humanitarian and development organisations and donors.

While concrete commitments were somewhat lacking, the workshop did produce one clear takeaway: political solutions and development action are needed to avoid creating long-term burdens on host communities, and to avoid premature or unsafe returns. It is important therefore to consider long-term solutions for IDPs in Ukraine before they become even more vulnerable, and potentially relapse into a category of people needing long-term humanitarian assistance.