|
Louisa Yasukawa
,
Banner: During food voucher distributions in Sana’a, NRC teams make sure positions in the queue are spaced out at least one meter to help limit the spread of COVID-19. Credit: Nasser Abdulkareem/ NRC 2020

In the country facing the world’s most acute humanitarian crisis, the impacts of the pandemic have been devastating. As conflict and flooding continued to trigger mass displacement in Yemen in 2020, a new survey by IDMC highlights how IDPs have been particularly affected by the fallout of the virus.

In IDMC’s 2020 mid-year update, we noted that lockdown measures and the economic downturn associated with the pandemic were exacerbating the vulnerabilities of the 3.6 million people estimated to still be displaced in Yemen at the end of 2019. Seeking to shed further light on the issue, IDMC commissioned an online survey to investigate the impacts of the pandemic on internally displaced people (IDPs) and non-displaced people in November 2020.

More than 1,600 web users across the country completed the survey, including 381 IDPs currently displaced by conflict, violence, and disasters. While the findings suggest that the pandemic has negatively affected the lives of most respondents, the impacts were especially severe for IDPs.

There have been 2,126 confirmed COVID-19 cases in Yemen and 616 associated deaths as of the 2nd February 2021 but this is likely to be an underestimate for various reasons, including the country’s low testing capacity. Overcrowded living conditions, underlying health conditions, and poor hygiene and sanitation in the areas where IDPs live were expected to heighten IDPs’ risk of contracting coronavirus. Forty-five % of IDPs said that they, or someone in their household, had experienced symptoms of COVID-19, compared with 30% of non-displaced people. The inability to distance from others was the most commonly cited challenge preventing IDPs from limiting the risk of catching or spreading the virus ( see Figure 1). Lack of hand-washing facilities appeared to be a significant challenge for IDPs living in organised or spontaneous sites. 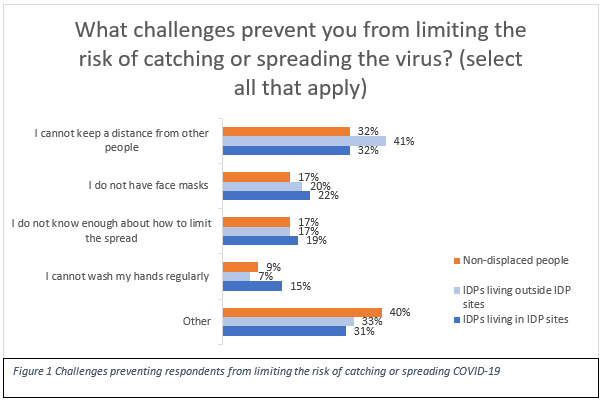 Of those who reported symptoms, 58% of IDPs said they or their household member had not been treated, compared with 46% of non-displaced people. More than half of IDPs cited cost as the reason for not receiving treatment (see Figure 2). Such findings are consistent with reports that IDPs’ lack of financial resources is a significant barrier to healthcare. In an assessment conducted by UNHCR, for instance, 44% of displaced households reported challenges in accessing health services during the pandemic, predominantly due to cost. 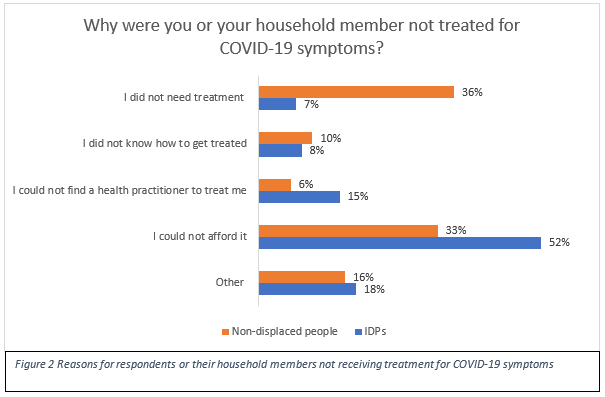 Amid reports that Yemen’s health system has completely collapsed under the burden of the pandemic, more than a third of IDPs said that their treatment for other chronic diseases had severely deteriorated because of COVID-19, compared with a quarter of non-displaced people.

The pandemic has adversely affected the livelihoods, housing, and education of IDPs

Consistent with the findings of an impact assessment conducted by the Norwegian Refugee Council in July 2020, the survey results suggest that the pandemic has disrupted other dimensions of IDPs’ lives and created new risks. Just over a third of both IDPs and non-displaced people reported that COVID-19 had led to a decrease in their household income compared to the same time last year, with most attributing this to “fewer labour opportunities”. Despite impacting both groups, the consequences of this reduction in income seem to have been particularly acute for IDPs.

Fourteen % of IDPs reported that the financial difficulties linked with COVID-19 had already forced them to leave their homes, while one in three IDPs feared that they would be forced to do the same (see Figure 3). 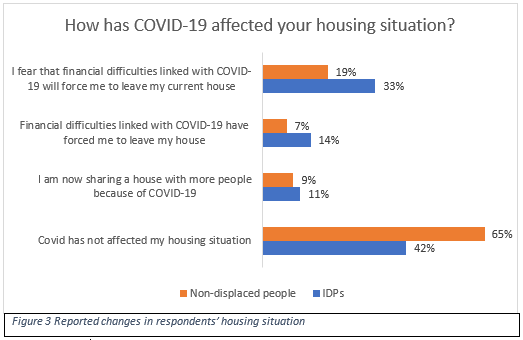 In addition to heightening their risk of eviction, this economic strain also seems to have affected IDPs’ access to education. A staggering 72% of IDPs reported that COVID-19 had interrupted their children’s education, compared with 59% of non-displaced people. Half of IDPs said their children had been out of school for more than six months and many said they did not know whether they would ever go back to school.

While school closures have caused significant disruptions, fees have also been added informally by some schools due to the non-payment of teachers’ salaries, which have disincentivised children to access education. At the same time, reports suggest displacement has also led to dropouts and limited the enrolment of displaced children in temporary schools.

IDPs in Yemen now face the highest possible level of displacement severity and access constraints continue to hamper the provision of vital humanitarian assistance. Understanding how IDPs have been disproportionately impacted by COVID-19 is crucial to informing immediate responses and addressing their critical needs.

Further data and analysis on internal displacement in Yemen and in other countries in the region will soon be available in IDMC’s forthcoming report on the Middle East and North Africa launching 15th February.

Banner: During food voucher distributions in Sana’a, NRC teams make sure positions in the queue are spaced out at least one meter to help limit the spread of COVID-19. Credit: Nasser Abdulkareem/ NRC 2020