Post-coup displacement in Myanmar: What we know, and what we don't 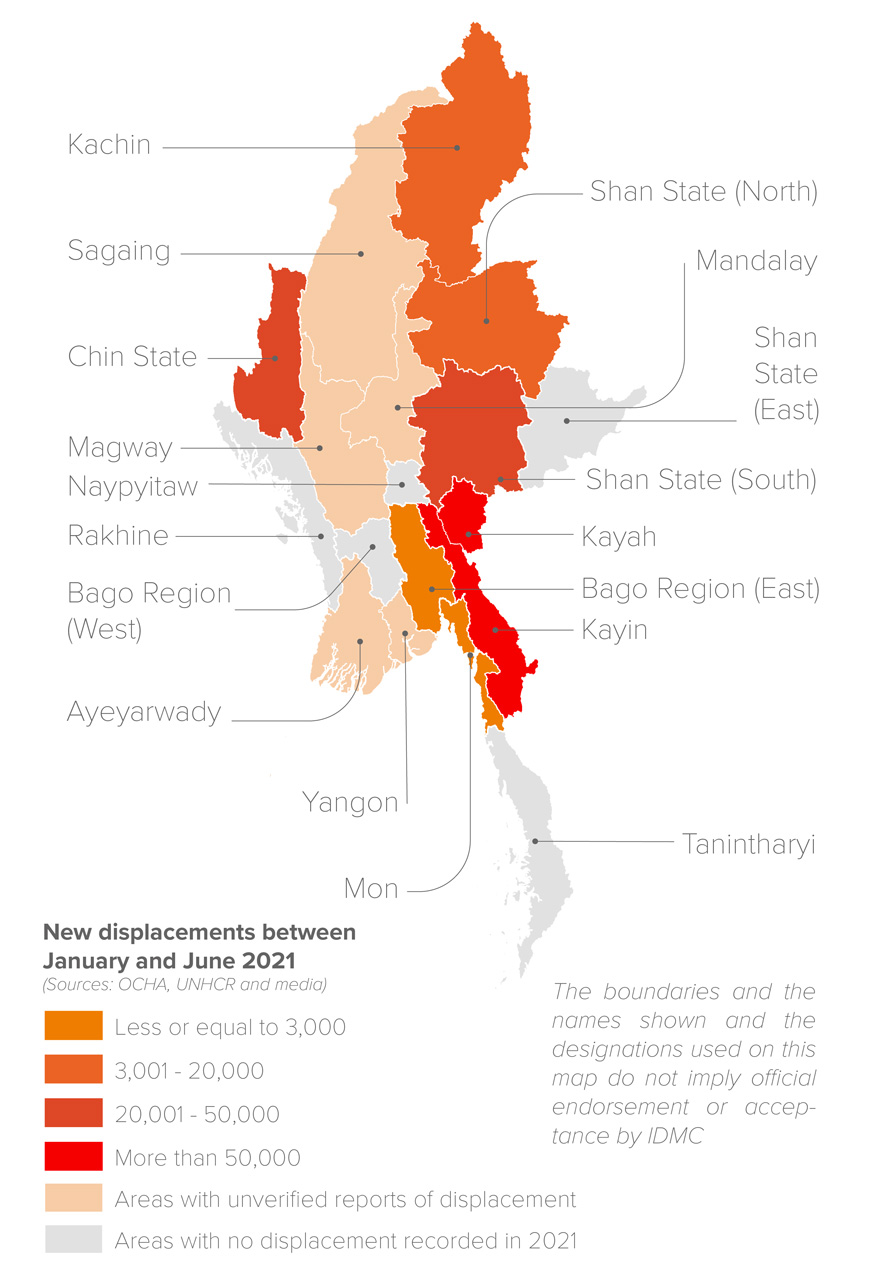 The Myanmar Armed Forces (MAF) overthrew the democratically elected government in a coup d’état on 1 February 2021. A violent military crackdown and civilian armed resistance followed, pushing displacement to record levels. Over 236,000 people fled their homes in the first half of the year, the majority since February. This is the highest number of new displacements ever recorded in Myanmar, and three times more than the 70,000 recorded for all of 2020. As violence surges and the humanitarian situation worsens, our understanding of the true scale of the crisis remains limited.

The coup is fuelling old and new conflicts

Conflict is not unheard of in Myanmar. The country is home to some of the world’s longest-running civil wars and about 505,000 internally displaced people (IDPs), as of December 2020. However, in recent years, fighting has been localised, with Rakhine State accounting for 80 percent of new conflict displacements last year. The coup changed this. Many of the country's Ethnic Armed Organisations (EAOs) have opposed the military takeover, bringing new intensity to simmering conflicts.

In Kachin State, after two years with no new displacement, fighting between the Kachin Independence Army (KIA) and the MAF reignited in March. Since then, more than 11,000 people have fled. In the country’s southeast, clashes between the Karen National Liberation Army (KNLA) and the MAF have driven small-scale displacement for decades but, following an escalation on 27 March, the MAF launched airstrikes in the area for the first time in 20 years, displacing 40,000 people over three days.

These areas have experienced conflict in the past, but the coup is also driving insecurity in previously unaffected states. Since April, local civilian resistance forces, or People’s Defense Forces (PDFs), have emerged to defend anti-coup protestors and repel military attacks. As the military responded violently to PDFs, hostilities forced tens of thousands to flee.

In the northwestern state of Chin, fighting between the Chinland Defense Force (CDF) and the MAF erupted in April. By mid-May, the MAF seized the town of Mindat, and 9,000 people were displaced as a result. In June, fighting spread to Hakha township and neighboring Magway Region, bringing the number of IDPs to 24,000. On the opposite side of the country in Kayah State, violence between the Karenni People’s Defense Force (KPDF) and the MAF exploded on 21 May, forcing one-third of the state’s population to flee. IDMC has never recorded a conflict displacement in Kayah, but today, it is the state with most new displacements so far this year.

Displacement is surging in these areas, but this is just the tip of the iceberg. Humanitarian access in Myanmar is dependent on travel authorisations which are rarely granted. Data from the Myanmar Information Management Unit (MIMU) paints a bleak picture of how this has worsened, with humanitarian presence in the country decreasing by 27 percent between August 2020 and May 2021. This limited humanitarian access, coupled with restrictions on press and growing insecurity, has hampered data collection efforts across Myanmar.

In areas where humanitarian presence was already limited before the coup, the situation is particularly dire. Increased insecurity since February has potentially displaced thousands in these areas. By April, reports of striking workers being evicted from government housing and tens of thousands fleeing neighbourhoods in cities like Yangon and Mandalay were common. At the same time, Sagaing Region became a hotspot of resistance, with masses of people reportedly fleeing Kani, Kale, and Depayin townships, though as of 1 July, only 5,000 IDPs have been confirmed by UNHCR.

Before the evictions, some residents fled with their belongings hastily packed into plastic bin bags. One said many of them have nowhere to go, and are worried about keeping children and elder relatives that live with them safe. #WhatsHappeningInMyanmarhttps://t.co/ILJMZddpIT

The military crackdown and violence involving People's Defence Forces serve as a stark warning that displacement is a risk in urban and peri-urban areas and previously unaffected regions, all of which are currently out of reach of international organisations.

In these cases, available data is based on a patchwork of media reports with unverified and differing figures, making it challenging to paint a comprehensive picture of what is happening Myanmar.

Even if these data gaps were filled, we need more than just a headcount of displaced people, which often excludes the temporary and repeated displacement that is common in Myanmar. Humanitarian partners indicate this is the case in Sagaing or Kayin, where people flee and return home once fighting ceases, sometimes permanently, sometimes for just long enough to gather supplies before retreating to the forests in fear of further fighting. In Mindat, the shelling of IDP sites means the real number of displacements could be higher than what is reported since people are forced to flee repeatedly.

The system for monitoring displacement in Myanmar relies on a network of local partners. With limited reach in certain areas and a tendency to provide a snapshot of IDPs at a given time rather than the dynamic movements described above, estimates are likely a significant undercount. This has implications for humanitarian response and displaced people, particularly as the political crisis spirals into a multi-faceted humanitarian one, with IDPs in increasingly dire need.

As flooding swept through Kayin, Mon, and Rakhine in July, all home to thousands of conflict IDPs, the response was hampered by movement restrictions and shortages of funding, both of which have deteriorated since February. The coup’s economic fallout is likely to push millions into poverty, forcing IDPs to choose between staying hidden and returning to insecure villages to sustain their livelihoods. The near-collapse of Myanmar’s health system and reports of COVID-19 patients fleeing are reminders that safe healthcare is not possible in many conflict-affected areas.

▶️Humanitarian response is ongoing, but constrained due to access challenges & lack of funds.

Local civil society organisations are filling the gap left by constrained international organisations and are best positioned to collect information on displacement. The lack of data, particularly in urban areas, is recognised in the Interim Emergency Response Plan, which targets two million people in areas affected by conflict since February. However, the scale of and severity of the crisis could be far higher. Tens of thousands of displacements are likely uncounted and IDPs in previously unaffected areas have not built up stockpiles of supplies, worsening their resilience to shocks and aggravating their humanitarian needs.  We cannot garner the political will to strengthen local capacity and establish the international cooperative effort required to address the crisis in Myanmar without data that reflects its true scale.