Raising the alarm in DRC

Democratic Republic of the Congo

On 20 October, the UN declared the situation in DRC a level-three emergency, effectively calling for the entire humanitarian system to scale up its response and ranking the country’s crisis as severe as those in Iraq, Syria and Yemen.

This is no false alarm or exaggerated plea. DRC already passed a tipping point last year, when it had the highest number of new displacements in the world. Another 1.5 million new displacements have been recorded so far in 2017, a 50 per cent increase on the 922,000 reported in 2016 with three months still left in this calendar year.

Displacement on the rise

Fighting between armed groups and communal tensions have ravaged DRC on and off for decades, and recently released displacement figures bring the total number of internally displaced people (IDPs) to 3.9 million. The challenges in collecting reliable data in DRC mean the statistics should be taken with caution, but the number of recorded IDPs is at its highest level since at least 2009 by more than a million people.

The provinces and regions with the largest numbers of IDPs include North Kivu with more than a million, Greater Kasai with 762,000, Tanganyika with 584,000 and South Kivu with 545,000. The UN Refugee Agency (UNHCR) has warned that more displacement is likely in these regions. 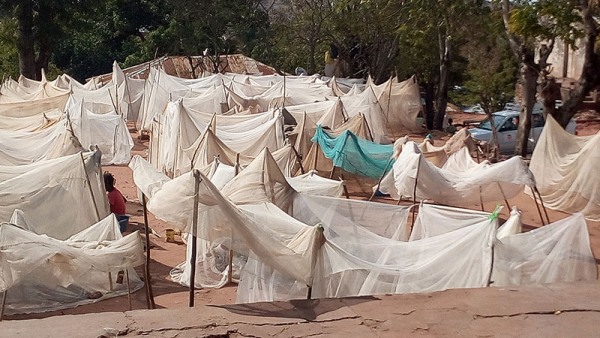 A spontaneous settlement of displaced families in Kalemie city hall, Tanganyka. Many only have mosquito nets to shelter them from the elements, when the rainy season is well underway. Photo credit: NRC/Prince Lumueno, October 2017

Collecting data in a complex, evolving environment such as DRC is a serious challenge. Security risks mean that data collectors need to obtain clearance before setting out to locate and interview IDPs and find out when and why they fled their homes.

Access is complicated further by the fact that DRC is the second largest country in Africa and its infrastructure is poor. Roads often become impassable during periods of heavy rain, leaving humanitarian organisations to rely on flights to cover the large distances and reach displaced populations. This, however, can be financially restrictive.

Data quality and coverage are also significant issues. A number of organisations collect information on displacement in different regions for different reasons and using different methodologies, which makes painting a complete picture difficult. The coordinating body for the country, the Commission de Mouvement de la Population (CMP), is led by the UN Office for the Coordination of Humanitarian Affairs (OCHA) and works to establish an overview. Alerts about new caseloads of people being forced to leave their homes are relayed to CMP, which periodically verifies the figures through contacts with humanitarian organisations and other informants on the ground, but not all cases can be verified.

The types of internal displacement common in DRC are particularly difficult to monitor. Many movements are pendular, meaning that people flee their homes, return at regular intervals and then flee again as they adapt to the rapidly evolving situation around them. Newly displaced people tend to stay with host families rather than in formal camps, and those who flee in full panic may resort to hiding in the bush. This makes it hard to locate and track IDPs, never mind meet their humanitarian needs.

Colossal needs off the international radar

When huge numbers of people are constantly on the move because of conflict and an insecurity, it can contribute to a range of humanitarian problems. In DRC, agricultural planting seasons have been missed leading to crop failure and food insecurity. The World Food Programme and the UN Food and Agriculture Organisation estimate that 7.7 million people are food insecure.

The country is also in throes of a cholera outbreak affecting 20 of its 26 provinces. Outbreaks and epidemics are much more likely in unsanitary conditions, and displaced populations are particularly at risk. Children’s education is also disrupted when families are displaced far from schools, and facilities may also have been destroyed, occupied by combatants or used as temporary displacement shelters.

With the media and international community focused on conflict and disasters elsewhere, DRC’s crisis is often overlooked, and this has had dire consequences for millions of people in desperate need of assistance. The country has been in conflict for the best part of 20 years, but evidence shows that the situation for the most vulnerable has deteriorated severely in recent years and is set to get worse still. This should serve as a wake-up call to the world.