Rethinking returns in the Migration Pact: How the EU can avoid creating new IDPs 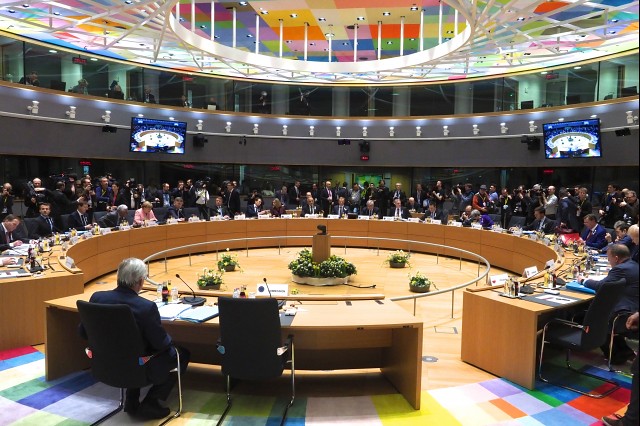 Home Affairs Ministers will meet today to discuss for the first time the long-awaited New Pact on Migration and Asylum. Presented by the European Commission in late September, the pact aims to bridge the differences between EU Member States and resolve the long-lasting deadlock around the redistribution of asylum seekers in the Union. By putting a strengthened emphasis on the return of asylum seekers, the Commission’s proposal risks, however, increasing internal displacement in countries of origin. Instead, the EU may consider incorporating development indicators when negotiating return agreements.

The EU’s New Pact on Migration and Asylum introduces a “new solidarity mechanism” by complementing relocation (i.e. redistribution) of asylum seekers with so-called “return sponsorships”. According to the Commission’s plan, Member States will have the choice to either relocate asylum seekers from EU countries with a high number of arrivals to their territory, or to help these countries return those without a right to stay. In the latter case, the Member State will be entirely responsible for the return process, including “taking full responsibility if return is not carried out within a set period”, or in other words, relocating the person to their own territory.

The risk of unsustainable returns

At the same time, the Commission proposes putting in place a so-called “border procedure”, comprising of a “pre-entry screening applicable to all third-country nationals who cross the external border without authorisation”. This means asylum claims with low chances of being accepted, such as from countries generally considered safe, will be examined rapidly without ever granting access to EU territory. While this should, in theory, significantly decrease the number of people without a right to stay in the EU, those allowed on European soil will likely come from politically instable, conflict-prone states.

As a consequence, those eventually returned after going through a regular asylum procedure, will also likely be from countries not prima facie considered safe and stable, such as Afghanistan, where most asylum seekers in the EU-27 originated from in the second quarter of 2020. This combined with an increased pressure on the Member States responsible for executing these returns – who risk being forced to relocate people to their territory if they fail to return them – encourages unsustainable returns, forcing returning asylum seekers into internal displacement.

Surveys conducted by IDMC in Afghanistan, Colombia, Iraq, Myanmar, Nigeria, South Sudan and Yemen between 2018 and 2019 show that many returnees end up in internal displacement in their country of origin. Of the 407 individuals interviewed, 77 per cent indicated they were not living in their area of origin after their return. While many are unable to go back home due to continuing insecurity, lack of housing is another important barrier. Around 40 per cent of returnees said their homes had been destroyed, while 32 per cent said they had been damaged, and 9 per cent said they had been occupied by others.

As a result, many of those returning find themselves living alongside other internally displaced people (IDPs) in camps or in informal urban settlements, confronted with housing insecurity, poor infrastructure and difficulty accessing health and other essential services. Returnees also often face difficulties re-establishing their livelihood. Nearly 83 per cent of those surveyed were finding it difficult or impossible to survive on their current income. Close to 30 per cent of them said they were hungry several times a week.

In addition, the absorption capacity of host communities is often stretched, undermining prospects for durable solutions. “You can see the pressure on local host communities,” said an official of the Ministry of Refugees and Repatriation in Afghanistan, interviewed for one of the studies. “If you visited the schools six or seven years ago, you would find 40 students in a class, but after these massive returns you see 70 to 80.”

Looking at returns from a development perspective

All of the above points to the need to rethink the concept of partnership presented in the pact. Currently, the European Commission mainly mentions restricting or facilitating access to Schengen visas as an incentive for third countries to sign, or more effectively implement, existing return and readmission agreements. In addition, the text foresees “the possibility that the Commission (…) could identify further effective measures to incentivise and improve cooperation to facilitate return and readmission, including in other policy areas of interest to the third countries”.

While many might read this as making EU development assistance conditional on return cooperation – something the Commission rules out in a footnote to the pact – a better approach would be to turn this logic around and incorporate a development perspective when negotiating return agreements. Even more so, since the pact already mentions development assistance as a “key feature of EU engagement in countries”, listing stable and cohesive societies, jobs and economic opportunities and peace and security among other factors to “help people feel that their future lies at home.”

Taking this development perspective, and the high bar it sets for EU assistance, into account when returning asylum seekers to their countries of origin could significantly reduce the risk of creating further displacement through return. Only when certain development and security standards are met, can returns be considered as sustainable and justified from a humanitarian point of view.

The Inter Agency Standing Committee (IASC) framework for durable solutions for IDPs can serve as useful guidance when deciding whether or not these standards are met. According to IASC, “a durable solution is achieved when internally displaced persons no longer have any specific assistance and protection needs that are linked to their displacement and can enjoy their human rights without discrimination on account of their displacement”. Other tools, such as IDMC’s Internal Displacement Index, which assess the broader conditions into which asylum seekers may return can also inform returns programmes. As former IDPs cease being considered internally displaced once durable solutions are achieved, returns should be considered sustainable under these conditions, and only under these conditions.

Given the enormous task of finding an EU-wide compromise on migration and asylum, the sustainability of returns will understandably not be at the core of minister’s discussions today. Considering the issue of returns not only from a security but also a development perspective could, however, be an important EU contribution towards stable and cohesive societies around the world.

This is the first in a new IDMC series of policy blogs. In the coming months we will periodically reflect on significant policy developments through an internal displacement lens.

Media Centre
Five examples of gender-sensitive solutions to displacement linked with climate change
Expert opinion
Science warns us that climate change will drive more people from their homes. So what should we do about it?