Seven years of sadness in Syria

Last week marked the seventh anniversary of the start of Syria’s civil war, but there was little to celebrate. The fighting continues unabated, forcing around 500,000 people to flee their homes in the first weeks of 2018 alone. Many of them were already living in displacement.

Turkish forces launched an operation at the end of January in the northern district of Afrin, which was controlled by the Syrian Democratic Forces, a largely Kurdish armed group. They advanced through the territory capturing villages until mid-March, when they took control of Afrin town and with it 90 per cent of the district. The local Kurdish authorities restricted the movement of civilians out of the district, and tens of thousands of people were only able to flee to Afrin town. Only people with ties to authorities were said to be allowed to leave.

As the Turkish forces closed in on the town, the movement restrictions were eased and more than 100,000 people are thought to have fled in just a few days, putting pressure on already overstretched host communities. Local organisations are thought to be struggling to provide aid and the health sector is reeling because most medical staff have fled. The destruction and breakdown of pumping stations and a dam have left people to rely on unchlorinated boreholes for water.

For many of those forced to flee, it will not have been their first experience of being displaced. More than a third of Afrin’s population, or around 125,000 people, were already living in displacement before Turkey’s intervention, and with each cycle they become more vulnerable. Nor is it clear whether they will be able to return, given that many people in Afrin support the Democratic Union Party, which is an offspring of the Kurdistan Workers’ Party (PKK), and will not be willing to live under the Turkish control. 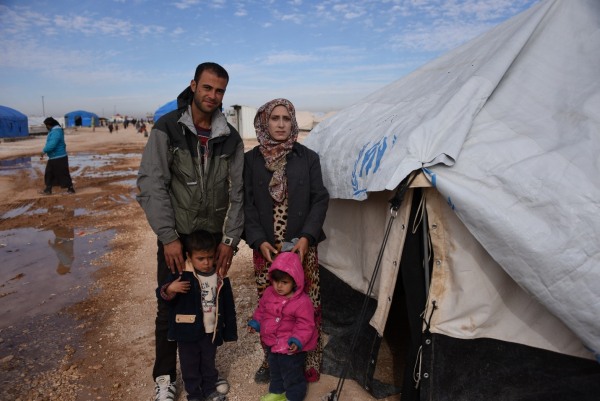 People on the brink

The Syrian government’s offensive on eastern Ghouta displaced at least 20,000 people within the enclave in February, and about 50,000 people fled the area in the past ten days for Damascus when the siege was partially breached. Nearly 400,000 people have been living under siege for almost five years in unimaginably dire conditions. They face constant shelling and bombing, they do not have enough food and medicines, and they have no way out.

Government forces also launched an offensive on opposition areas in Aleppo, Idlib and Hama governorates at the end of December last year. They quickly wrested control of large swathes of territory, displacing nearly 400,000 people in just a few weeks. To make matters worse, some IDPs’ settlements were hit by floods that destroyed their makeshift shelters. Humanitarians and host communities were stretched to their limits, and many displaced people were forced to live outdoors for days in freezing temperatures.

As Syria’s humanitarian and displacement crisis deepens, the data landscape is also deteriorating. With the closure of the countrywide needs and population monitoring programme in November, the quantity and quality of information available has dropped sharply. Few agencies collect data in government-controlled areas, and as the government regains control throughout the country, the data gap is likely to widen further. In brief, this means that we are losing track of how many people are being displaced. We know that overall numbers are increasing, that living conditions are plumbing new depths, however a data ‘black hole’ will seriously hamper any attempt to provide for the needs of the displaced people.