Six internal displacement crises you may not have heard of 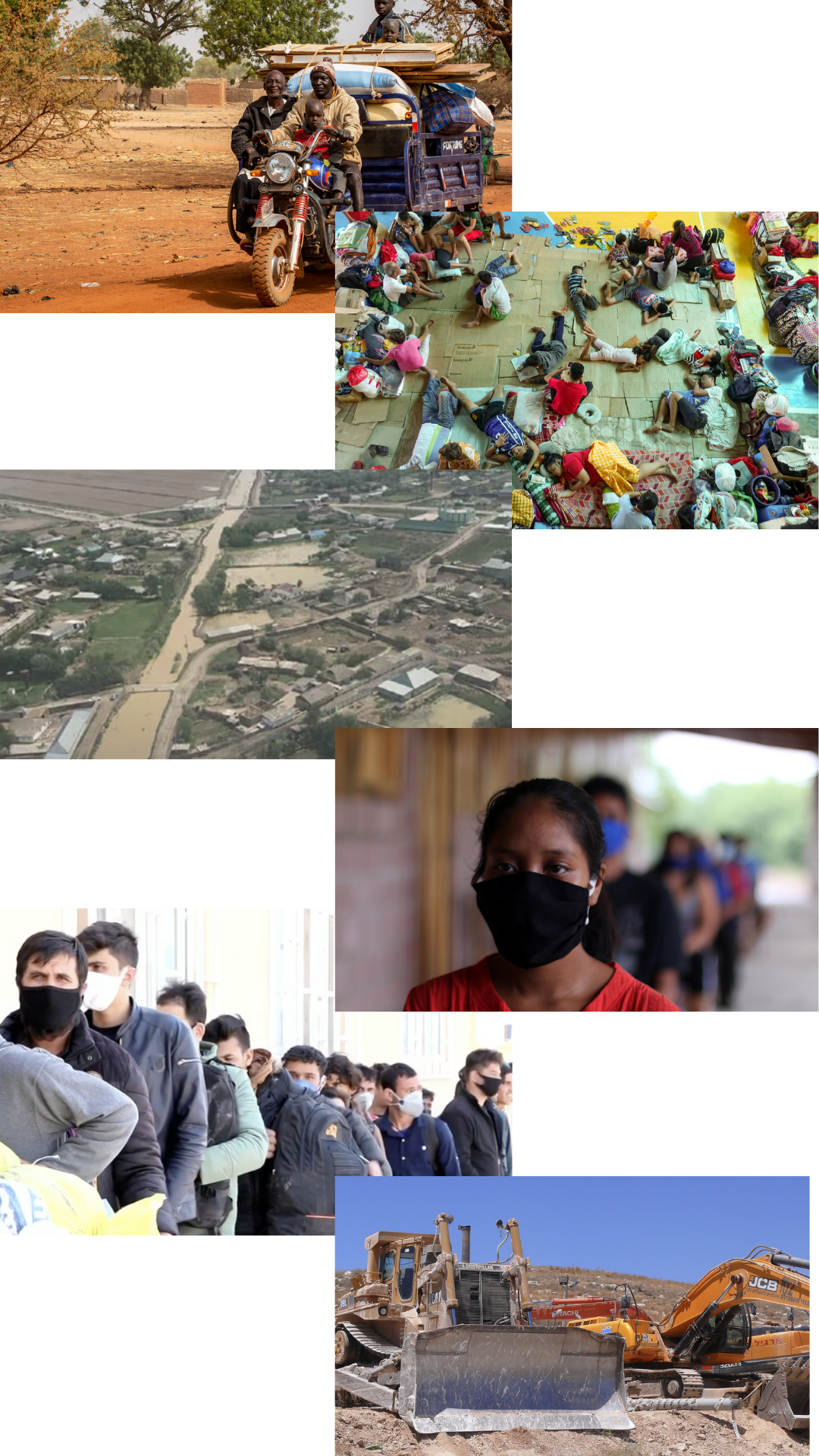 The first half of 2020 was marked by a series of significant displacement events across the world but not all of them made the front pages. To shine a light on some neglected crises, we put together a list of internal displacement events largely overlooked by the media.

Our Internal Displacement 2020: Mid-Year Update report highlights a staggering number of new displacements, from ongoing violence in the DRC, to evacuations and housing destruction brought on by wildfires in Australia. The year has also been marked by the Covid-19 pandemic which created a series of added challenges in the context of internal displacement. From Tropical storm Amanda in central America, to Volcano Taal in the Philippines and all the way to the intensifying violence in Burkina Faso, conflict and disaster events generated new displacements and increased the vulnerabilities of the affected populations across the world.

In Burkina Faso, violence intensified in the first six months of the year. There were a reported 419,000 new displacements linked to the multi-layered violence. Armed groups are growing and expanding their geographical reach daily. Attacks are displacing hundreds of people each day, sometimes rendering the same families homeless repeatedly in short periods of time. The armed groups include bandits, jihadists, and self-defence movements that continue to be formed as a response to the growing insecurity. In 2020, the country is reporting the highest rates of new displacements in West Africa, followed by Mali and Niger, which have also been impacted by the increase in violence along the border zones of the Liptako Gourma region. This internal displacement situation is likely to continue expanding geographically in the months to come. For comparison, in 2017 the country hosted 4,700 IDPs; in August 2020, this figure exceeded 1 million people.

The first month of 2020 was marked by the eruption of volcano Taal in the Philippines. Nearly 506,000 people were evacuated in Calabarzon between January 12 and 26. The Philippine Institute of Volcanology and Seismology (PHIVOLCS) ordered for the total evacuation of Taal Volcano Island and an additional evacuation of areas at high-risk due to flows of ash, lava, rocks, as well as due to a volcanic tsunami within a 14-kilometer radius of the main crater. The area – which is home to farmers, fish pen operators and tourist guides – has long been designated a danger zone by the government because of its proximity to the volcano. Officially, no one is allowed to live on the island, yet hundreds of thousands of people were rendered homeless in the area in 2020.

3. A dam bursts in Central Asia

The largest internal displacement event in Central Asia this year so far, both in terms of magnitude and number of people affected, was the flooding in Uzbekistan and Kazakhstan in May. On May 1, the Sardoba Reservoir Dam on the Uzbek side of the Syr Darya river broke, creating massive flooding in Uzbekistan and neighbouring Kazakhstan. More than 70,000 people in 22 villages were evacuated in Uzbekistan and 50 people had to be taken to hospital due to injuries sustained. In Kazakhstan, around 31,000 people were evacuated in the district of Maktaaral in the region of Turkistan. Residents were impacted by significant material damage, remained displaced for over two weeks, and needed assistance for over four months. Dam failures and collapses, albeit widely underreported in the media, resulted in new displacements in other regions of the world, ranging from the Pho Thu Province in Viet Nam to Michigan state in the USA, and such events continue to displace families and destroy homes and livelihoods – sometimes for months and years.

The US’s National Oceanic and Atmospheric Administration (NOAA) has issued several warnings that the 2020 hurricane season is likely to be one of the most active ever recorded. In the first half of 2020, two major tropical storms hit central America: tropical storm Amanda and Cristobal. A total of 14,300 and 6,000 people were displaced by storms Amanda and Cristobal respectively. Cristobal formed over the bay of Campeche from the remnants of tropical storm Amanda, which formed in the East Pacific. After making landfall, Cristobal crossed the states of Campeche, Tabasco, Chiapas and Yucatan in Mexico, resulting in more than 6,000 people seeking shelter. Cristobal then crossed the Gulf of Mexico and made second landfall in the U.S. state of Louisiana. Amanda resulted in the evacuation of more than 13,000 people in El Salvador and at least 910 in Guatemala. With the recent landfall of storms Laura and Isaias, the hurricane season is likely to continue affecting the region and displacing entire communities.

Afghanistan’s protracted conflict continues to displace hundreds of thousands of people because of clashes between Afghan National Security Forces and the Taliban and other non-state armed groups. Between 1 January and 30 June, an estimated 117,000 new displacements were reported. Not only that, but the country has been hard hit by the Covid-19 outbreak. The health sector is reporting significant shortfalls of staff and facilities across the country, which had only four doctors per 10,000 people in 2019. Due to Covid-19, large influxes of Afghan migrants returning to unsafe war-torn regions from Iran (and to a smaller extent from Pakistan) have put a strain on the already scarce resources of the country. Return influxes are likely to lead to even more internal displacements sparked by tensions over scarce resources, worsening food insecurity and rising poverty levels (that have been exacerbated by the pandemic) within the country in the near future. These external factors point to risks of future displacements in a country that is already affected by conflict.

6. Demolitions, annexation plans, and reported displacements in Israel and Palestine

Although Israel announced that no demolition would take place during the pandemic, a substantial number of displacements linked to housing destruction by Israeli forces have occurred in the West Bank in the past six months. Most of these 370 displacements took place in Jerusalem and Jericho, where over half of the displaced population is under 18 years old. This estimate is likely conservative as more families could have left for other reasons, such as harassment, increased movement restrictions or loss of livelihoods. The Government’s plan to annex the Jordan valley announced in September 2019 heightened tensions between Israeli and Palestinian authorities, further undermining cooperation between them and progress toward their common goal to halt the spread of Covid-19 infections. The plan also raises concerns in terms of potential future displacements.