Stuck in the Mud: Urban Displacement and Tenure Security in Kabul’s Informal Settlements 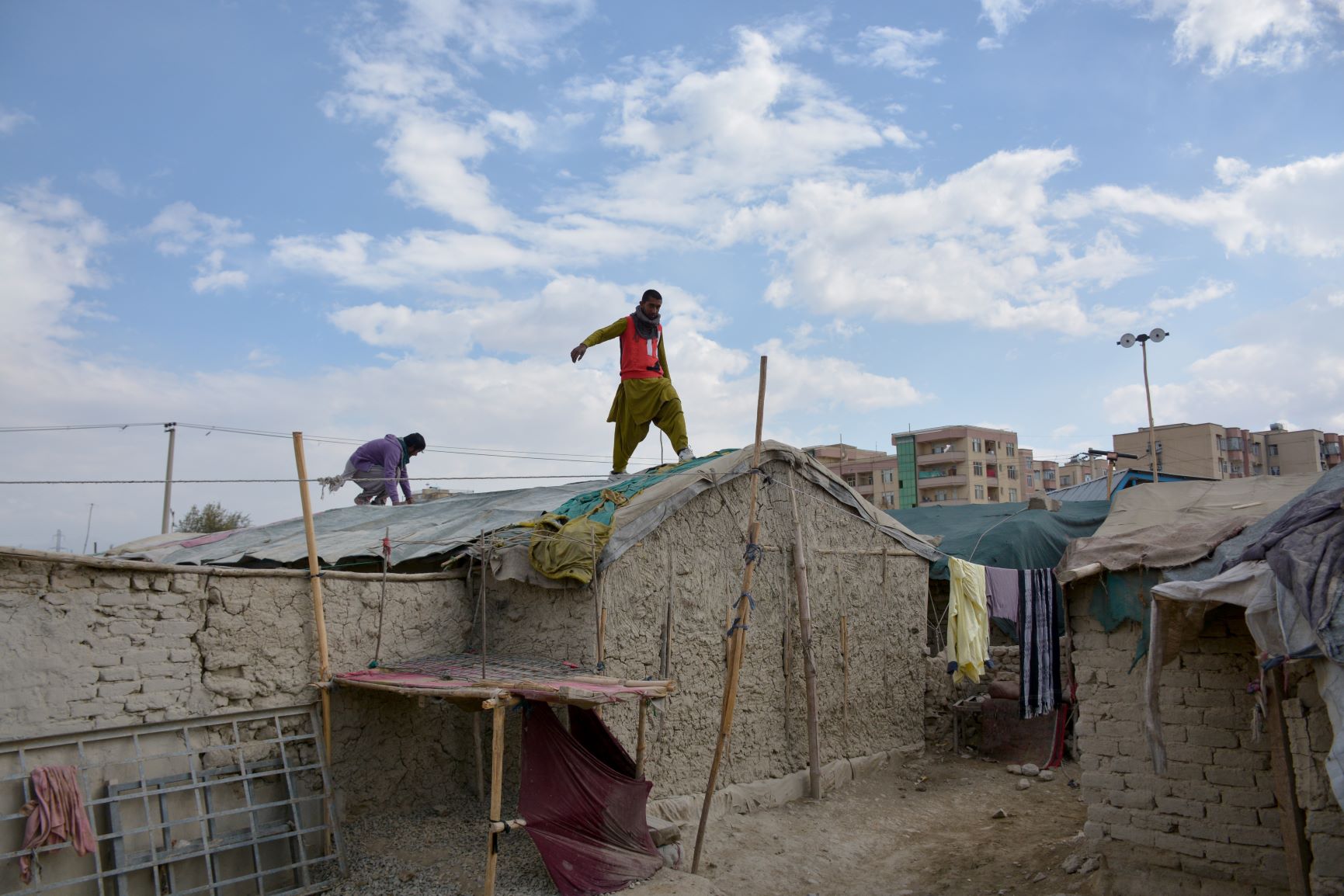 As winter arrives, IDP families repair their mud house roofing to protect them against rain and snowfalls. It rains for almost five months in many parts of the country, including Kabul. Credit: NRC/Enayatullah Azad

This post is authored by Anna Hirsch-Holland and based on the findings of a study by Mohammad Abdoh and Anna of the Norwegian Refugee Council (NRC) in Afghanistan. As well as conducting interviews and focus groups with residents from three Informal Settlements, the research team also spoke with landowners and representatives from authorities, and used data collected by the Kabul Informal Settlements Taskforce in February 2018. The full study is published as a background paper to the Global Report on Internal Displacement 2019.

Kabul city is home to at least 55 informal settlements, constructed primarily from mud. The settlements accommodate more than 55,000 displaced people, for whom progress towards durable solutions is frustrated by complexities of land ownership, private interests, and weak enforcement of national policy frameworks. They are unable to obtain adequate living conditions or tenure security in the settlements, unable to move to any other location due to lack of available land and livelihoods, and unable to return to their places of origin – they remain stuck in perpetual displacement.

Fewer than 30% of informal settlement residents have a rental agreement, and many of them report being threatened with evictions, often multiple times. These threats arise primarily because of landowners’ plans for future development of the sites – hence their limited interest in issuing written or even verbal tenure agreements. Moreover, the poor systems for determining land ownership in Kabul results in ambiguity over who is the true landowner of a site, thereby making it all but impossible for residents to advocate for tenancy agreements.

In one site, residents claim that at least four different men have claimed to be the landowner and they fight among themselves over who collects the rent. In another site, residents report that they have been approached by someone who claim to own the land – some five years after they settled on what they presumed to be state-owned land. The residents were suspicious and challenged the claimed landowners, who referred them to the State Ministry for Parliamentary Affairs, which promptly confirmed the land ownership. Since this is not a ministry that would usually be involved in confirming land ownership or resolving land disputes, the residents alleged that there were personal connections involved, which protected the landowner and his interests.

Even where residents possess customary tenure documents, they continue to face tenure insecurity and risk of eviction. In one such site, residents purchased land from a vendor who had proof of ownership, but another individual is now also claiming he owns the land and has the title deed to it. Moreover, there is a pre-existing land dispute between the original vendor and the local authority, which claims it is state land that has been grabbed.

Claimed landlords of Kabul’s informal settlements often actively prevent construction of adequate housing or infrastructure, as they have plans to develop the land. In one site the landlord has barred construction of water points, forcing residents to bring drinking water from 1km away – twice the distance recommended by the Sphere Minimum Standards in Emergencies. Even where land is state-owned (the majority of cases) residents are often forbidden by authorities from building permanent shelters or making even superficial upgrades to the sites. Field staff from the Norwegian Refugee Council, for example, were denied permission to construct grey water drainage channels by local officials, who feared that upgrades would make conditions more tolerable for the settlement residents thus making them more willing to stay and harder to remove.

Despite eviction threats and inability to build sustainable homes and lives, most residents of informal settlements have no plans to leave.  On the one hand, they cannot afford to buy land elsewhere; on the other hand, they are fearful of moving out of the city and away from its livelihoods opportunities.

Development of land for profit would seem to be a more attractive use of the land than the creation of informal settlements for displaced persons. The fact that some purported landowners choose the latter rather than the former suggests that they are ‘sitting’ on the land while awaiting the right time to develop it – e.g. until they have amassed sufficient investment capital. In the meantime, they can collect a tidy income from rent – as much as $57,000 per year depending on the size of the site and the amount charged. Even if the rent is low and the landlord’s revenue significantly less, some residents still feel that their main interest is to generate an income – indicated by the aggressiveness with which they collect rent or punish late payments. As one resident described her landowner, “he visits us…right at the last day of the month, to collect the rent. If someone delays the payment, he gets angry. In the past, he sometimes demolished walls surrounding shelters because the rent was delayed”.

Even if landlords are not interested in earning an income from rent, they may prefer to keep displaced families on the land to prevent it from being ‘grabbed’ by anyone else in the meantime. This could equally apply to state owned land, where local authorities have a master plan for development but have not yet accessed the funds to implement it. Some residents report that landowners and authorities have given them an eviction notice to make way for construction, but have allowed them to stay for free until the developments start – a generous act in part, but one which only perpetuates the residents’ on-going sense of insecurity as they are given no indication of how long they can stay, and, as one resident lamented, “we don’t have any other home and we will become homeless if the landlord evicts us”.

In cases where the land is contested, or the landowner is unable to truly prove ownership, he may be using the settlement to further his claim to the land. Exploiting an inadequate inventory of state land, landowners can ‘grab’ land by allowing displaced families to occupy it for rent. These ‘land-grabbers’ prefer to obtain rent from displaced families over development, as the latter would expose them to the authorities.

Looking to the future

Landowners in Kabul have been able to profit from displacement by allowing vulnerable families to establish settlements on their land. They have exploited weaknesses in Afghan systems for determining land ownership to maintain the status quo and protect their interests. Meanwhile, with little or no knowledge of laws and policies that are meant to protect them, residents of informal settlements are unable to obtain tenure security and humane living conditions in their current locations. At the same time, their prospects of accessing appropriate land and protection in another location remain a distant and uncertain possibility.

To address this situation, there must be stronger advocacy by the international community, combined with technical support, to encourage the Government of Afghanistan to pursue full implementation of domestic policies to protect displaced persons and obtain durable solutions. At the same time, a bottom-up approach should also be employed. Residents and landowners of informal settlements must be informed about tenancy agreements and rights. In the process, displaced people might be empowered to negotiate for improved tenure security and living conditions through direct engagement with landowners, private business, and authorities. As explained by one resident wishing for documentation of a tenure agreement: “then we could present [the document] to anyone and no one can harm us, and we can live in peace. We can send our children to school and we can work to build our life.”

Banner: As winter arrives, IDP families repair their mud house roofing to protect them against rain and snowfalls. It rains for almost five months in many parts of the country, including Kabul. Credit: NRC/Enayatullah Azad