Sudan’s unrest and the challenge of understanding internal displacement 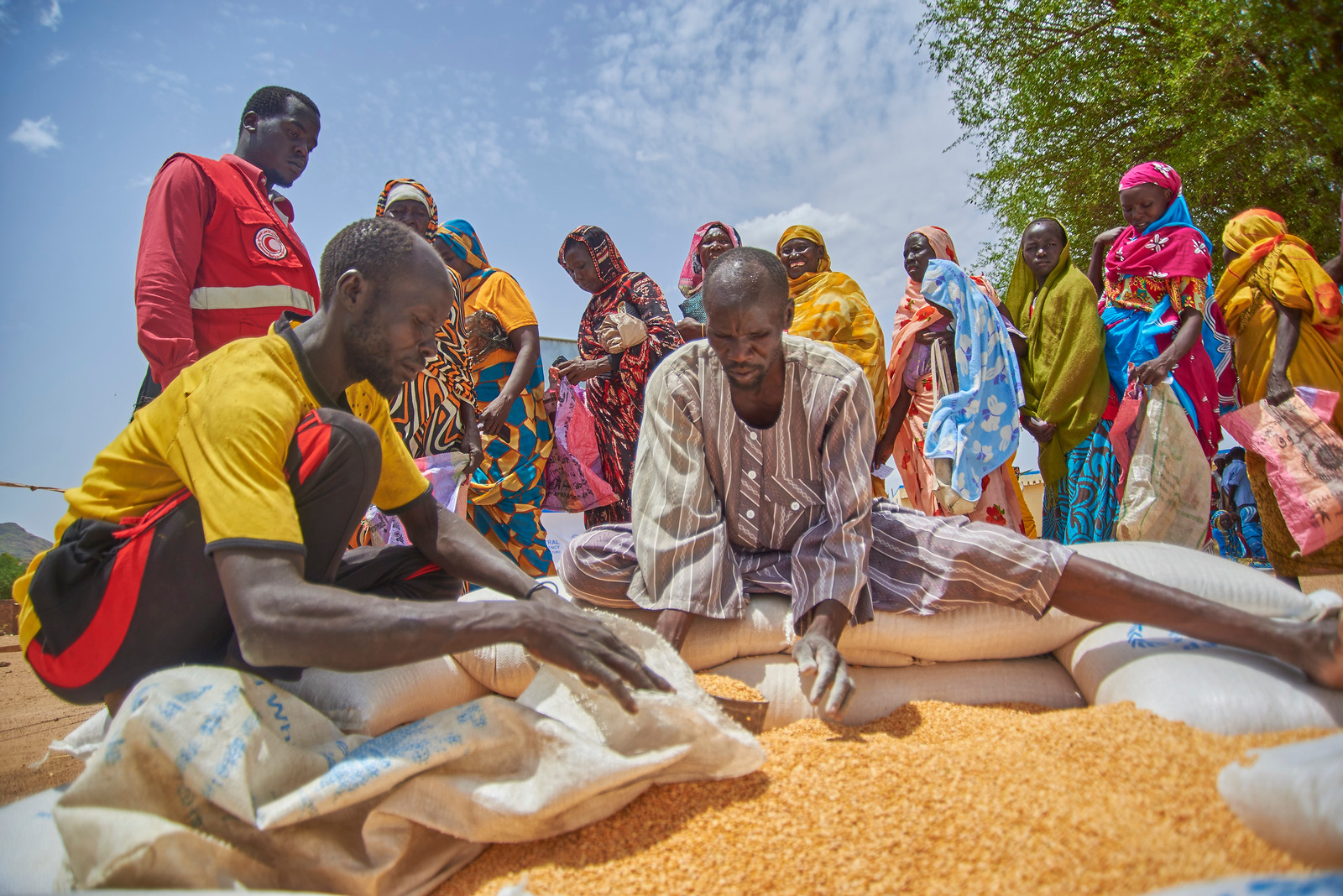 As the corruption trial of ousted Sudanese President Omar al-Bashir begins, IDMC’s monitoring expert Ivana Hajzmanova explores whether the country’s economic and political crisis has been a leading trigger of high levels of internal displacement.

Since the beginning of 2018, Sudan has faced a severe economic crisis due to a set of major economic reforms which, coupled with multiple devaluations of the Sudanese pound, has caused shortages of essential commodities and hard currency. The economic crisis has disrupted public services and agricultural activities and resulted in dramatic price increases for staple food items. This sparked country-wide protests and civilian unrest throughout much of 2018.

After allegedly ordering an attack on peaceful protesters, Bashir was toppled by the military in April 2019. Consequently, the Transitional Military Council (TMC) took power and faced ongoing international pressure to transfer authority to a civil administration. After another wave of protests and violent clashes between protesters and the military, the TMC and a coalition of opposition groups signed an agreement in July, which called for a three-year transitional period leading to the election of a civilian-led government.

How does this relate to forced displacement?

IDMC recorded nearly 11,000 displacements in Sudan between April and June 2019 as a result of inter-communal fighting and clashes over resources in East and Central Darfur, as well as in White Nile and South Kordofan states. This includes over 4,000 South Sudanese refugees, who were attacked and displaced from a refugee camp by the host community, again over scarce resources. There have also been allegations of refugees being responsible for ongoing insecurity in the area. To put this in context, IDMC recorded a similar number of displacements in the whole of 2018 as a result of clashes between farmers and pastoralists, and none in 2017.

This sharp increase in internal displacement could suggest that the tense political and economic situation has worsened relations between communities. Commodities, including staple food items and fuel, are scarce or very expensive due to the prolonged economic crisis – which impacted imports in April and June – and the multiple closures of Sudanese borders.

Our data shows that clashes between communal militias were actually much more common in 2017 and early 2018, before the political and economic crisis escalated, but that they caused little displacement. They were mostly triggered by competition over land between farmers and pastoralists; this was also the only type of inter-communal violence that resulted in displacement in 2018 (see graphic below). While instances of inter-communal and ethnic violence decreased in 2019 following the period of civil unrest, for yet reasons unknown; the displacement that followed was significant, indicating that the conflict – this time linked to access to markets, availability of goods and the increase in prices – was much more severe. 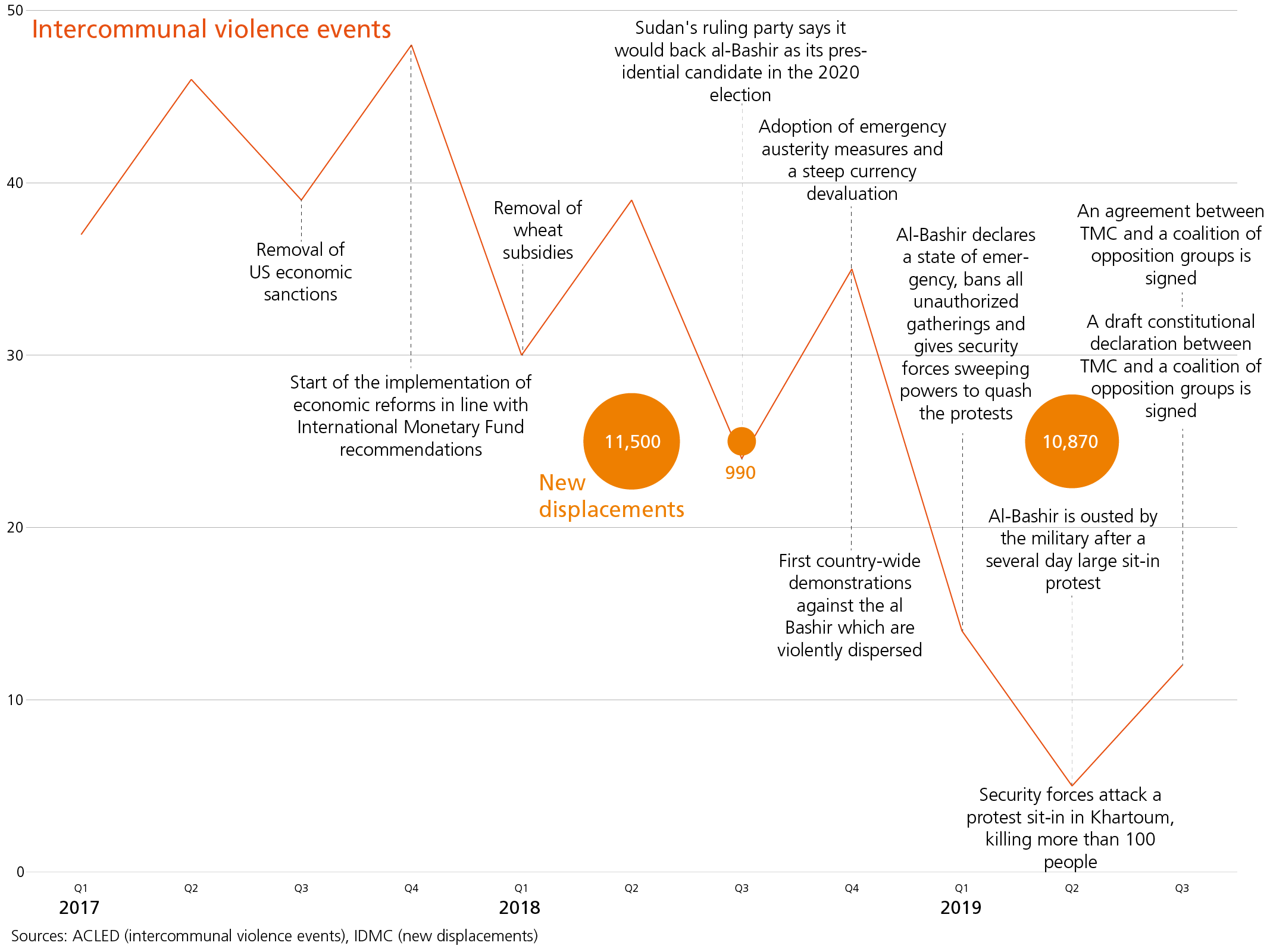 Despite last week’s power-sharing agreement between the TMC and a coalition of opposition groups, the crisis in Sudan is far from being resolved. Tensions between communities will probably continue in the coming months, which will most likely lead to new displacements. Growing animosity towards South Sudanese refugees as well as the impact of the severe economic situation on refugees’ living standards are concerning, as they might lead to premature and forced returns to South Sudan. If this happens, the crisis will affect not only Sudan but also the stability of neighbouring countries.

In addition to these concerns, IDMC also observed an increase in violence from the Rapid Support Forces (RSF) – a paramilitary branch of the Sudanese Intelligence Bureau, formed to fight the non-state armed groups in Darfur. The RSF has allegedly committed grave human rights violations against civilians in Darfur. While it kept a low profile during the political and economic crisis, RSF activity skyrocketed after the fall of Bashir – presumably as it tried to establish its position in the governance and military structures of post-Bashir Sudan. This dynamic is worrisome, considering that RSF activities are characterised by violence against civilians, including sexual violence and use of excessive force against protestors. IDMC was not able to identify any displacement associated with the increased violence perpetrated by RSF, but its recent activity has contributed to heightened tensions and fear among civilians.

To respond effectively to the ongoing crisis and avoid further displacement, national and regional dynamics must be considered together with adequate assistance to both displaced and host communities. An effective response must be backed by accurate information, which is currently missing. The existing data and research do not allow us to draw a clear correlation between displacement and the ongoing political and economic crisis in Sudan. We have identified several patterns – such as an increase in inter-communal violence and associated displacement just after the ousting of Bashir – that should be explored further. These patterns already give us an idea about how the different drivers of the crisis and its outcomes are related, but it is far from sufficient to provide a base for informed decisions and policy planning.

Media Centre
2020: A year of challenges and opportunities
Media Centre
10 Ways to Tackle Climate Displacement in the Run Up to 2030
Expert opinion
From aid to empowerment: Addressing urban displacement in Colombia’s informal settlements

Publication
Data on human mobility in disaster contexts: Where are we and what comes next?
Events
IDMC Strategy 2021-2030: From Evidence to Impact