Syrians at the berm: surviving in nightmarish conditions and with an uncertain status

After closing all informal western border crossings in 2013, Jordan started limiting the numbers of Syrians entering the country through its eastern border in the following year. Due to mounting domestic discontent with the increasing number of Syrian arrivals, Jordan started to allow only hundreds of refugees per month to enter the country, mostly through the Hadalat and Rukban crossings at the berm, even though thousands of people were regularly arriving there.

This restrictive Jordanian policy, coupled with the rapidly deteriorating living conditions in Syria, pushed thousands of Syrians to the Jordanian border where they were not allowed to enter the country. According to IDMC figures, in October 2015, 5,000 people were stuck at the border area, however within two months this figure had increased to 14,300 people. While over the course of 2016, the situation got steadily worse and, by the end of the year, the figure stood at 85,000. Our latest estimates from August 2017, now puts the figure between 45,000 and 50,000. The UN estimates that four out of five of these displaced people are women and children. 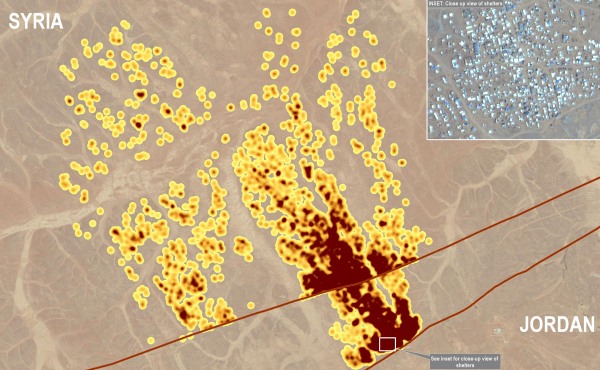 Internally displaced, refugee or someone in between?

Displaced Syrians are concentrated around the Rukban crossing point. Their location raises an important question about their legal status and whether they are still internally displaced people (IDPs) or already refugees. According to the Guiding Principles on Internal Displacement, IDPs are people who were forcefully displaced from their homes but have not crossed an internationally recognized State border. The Convention on Refugees, on the other hand, states that refugees are people who find themselves outside the country of their nationality owing to fear of being persecuted for reasons of race, religion, nationality, membership of a particular social group or political opinion.

Because of the unique location of the berm, both definitions are applicable to the people trapped in there who therefore find themselves in a legal limbo. Most organisations consider them to be refugees because they are out of their country and their goal is to become refugees in Jordan. Technically, however, they are not in Jordan yet. At the same time, it is also difficult to consider them as internally displaced as they are outside of Syria. For future purposes, there must certainly be more research done on such cases of fleeing populations who get stuck in between countries. For now, IDMC accounts for them as IDPs.

Beside the legal status of the people at the berm, their needs are enormous. The area nearby the berm is populated by tribal groups fighting for control. The place has evolved into a lawless environment where violence, extortion, and black market thrive. Moreover, as Syrian forces move closer to the berm, trade routes used for deliveries to the black market are being cut and less goods reaches the people in need.

Delivery of humanitarian aid is extremely challenging because of political sensitivity of delivering aid to no man’s lands as well as insecurity. Humanitarian organisations have so far operated across the border from Jordan. The already limited access was cut off in June 2016 after militants of the Islamic State in Iraq and the Levant drove a suicide bomb into a Jordanian army checkpoint. The delivery of aid resumed at the end of 2016, but humanitarian organisations still did not have access to the berm and aid was delivered through UN’s contractors. Such deliveries created many challenges, especially because contractors also involved armed groups as well as the Jordanian military and the verification that aid reaches the right people was challenging. Since July 2017, no aid has been delivered to the berm as Jordan is advocating for cross-line rather than cross-border assistance, which means that aid should be delivered from within Syria.

As a result of such constraints, people at the berm die of preventable diseases due to lack of medical care and essential medicines. Deaths related to childbirths, hepatitis, gastroenteritis and hypothermia are also reported. Thousands of people are surviving only on water and flour. The scale of deaths is hard to estimate, but satellite images show growing graveyards around the Rukban border crossing.

The situation at the berm remains critical with no resolution in sight. No Syrians are being allowed into Jordan and at the same time, the return to Syria is near to impossible as the closest town is hundreds of miles away across harsh desert. Both seem like impossible choices and yet to stay might be the worst option of all.