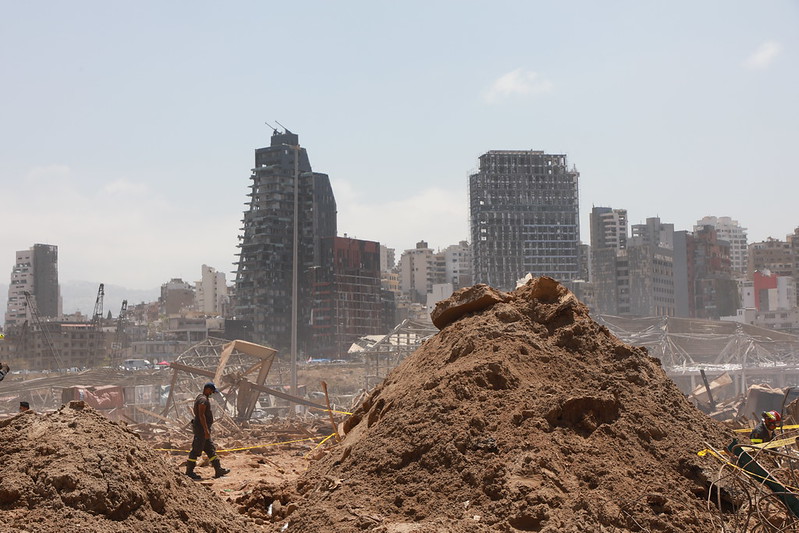 The double explosion which took place in Beirut’s port district on Tuesday August 4 is unprecedented. Large parts of the Lebanese capital have been destroyed, reportedly leaving up to 300,000 people homeless. It is not the first time Lebanon has been affected by internal displacement, but this time it does not fall into the standardised categories of conflict or natural hazard leading to disaster displacement.

Up to  300,000 people are estimated to have been rendered homeless by the catastrophe or suffered extensive damage to their homes. These numbers are comparable to other large-scale disasters such as Typhoon Vongfong, also called Ambo, in the Philippines this past May; Cyclone Vayu that affected India in June 2019; or the displacements caused by 2019’s devastating monsoon season in Bangladesh.

Such figures are also close to the average number of displacements triggered by the conflicts in Yemen, Nigeria or Sudan every year.

However, while the former are accounted for in global displacement figures, those displaced by the Beirut explosions are at risk of not being recorded.

Based  on initial findings, the blast would fall under what the Guiding Principles on Internal Displacement refer to as "human-made disasters".

This category is particularly complex to frame, for several motives. First, it is not entirely clear what falls within its scope and many events that would fit its definition (although no clear-cut definition exists, yet) are often interconnected with other hazards such as a flood caused by the breaching of dam, or an earthquake causing said breach.

Second, because although some of those types of events garner a lot of media attention, such as the Beirut blast or the Grenfell Tower Fire in London in 2017, most are difficult to detect. These more visible events represent the tip of the iceberg, made of a huge number of smaller-scale hard-to-detect disaster events, such as repeated fire outbreaks in IDP camps in Nigeria or Iraq.

There is no systematic reporting on displacement caused by “human-made” or “technological” disasters, nor established data collection systems, such as those found in the monitoring of the more “typical” categories that are conflict, violence and natural hazards. Indeed, they fall at the margin of these more clearly defined forms of displacement, in the same way evacuations linked to unexploded bombs from World War Two (as was the case for 50,000 people in Puglia, in Italy, in 2019), or even displacement due to or linked to the Covid-19 pandemic.

Yet, preliminary assessments of the scale and severity of internal displacement linked with the Beirut explosions highlight the need to better capture and monitor how displacement affected peoples’ lives. In Beirut, the government, UN agencies and NGOs have reacted efficiently to provide shelter, hygiene, medical, and food assistance. But some of the biggest challenges may be yet to come.

Disrupted housing conditions for IDPs and hosts throughout the city

Most of the 300,000 estimated to be displaced are currently staying with friends and relatives, in their damaged houses or in free accommodation offered by fellow citizens. Collective shelters have also been set up but many displaced people reportedly preferred to move to makeshift shelters close to their homes or to return to their neighbourhood during the day for fear of looting and theft. Nearly every family living in undamaged buildings has taken in additional people, hosting up to 10 individuals in a significant show of solidarity. This community engagement will, however, be difficult to maintain in the long run but the needs may last for months.

The duration of displacement will vary based on the level of damage and each household’s capacity to rebuild, and their living conditions prior to the explosion, but many fear that without assistance they will remain displaced for up to one year. Some of the affected areas are hosting vulnerable households but also migrant workers and refugee communities. Lebanon's economic situation is also likely to delay reconstruction as many had reportedly already lost everything due to the economic crisis, and were left with only their homes.

With displacements likely to last, emergency assistance should soon be complemented with longer-term interventions. The 80,000 children among the displaced, after having already lost months of schooling  as a result of the pandemic and of the demonstrations in October and November 2019, will face new difficulties as many schools have been damaged or are currently used as shelters. Adults, for their part, will likely need alternative income-generating activities or financial support if their previous workplace was destroyed. And as the Lebanese government stepped down on August 10, ensuring the political participation of all the citizens of Beirut in future elections  will require specific measures.

With such significant and long-term repercussions, and seemingly very preventable causes, the blast is a sad reminder that more investment is needed to prevent the likelihood of displacement by technological hazards in the future,  but also to better frame and understand such events, their root causes and impacts, and to respond to them adequately when they unfortunately occur.

More and better data, not only on the numbers but also on the immediate vulnerabilities of the displaced people and their progress over time are crucial to respond adequately. Yet, in spite of significant advances made over the years in the understanding of disaster displacement risk displacement, capturing, recording and reporting on some other forms of displacement should still be significantly improved.