The hidden costs of disaster: displacement and its crippling effect 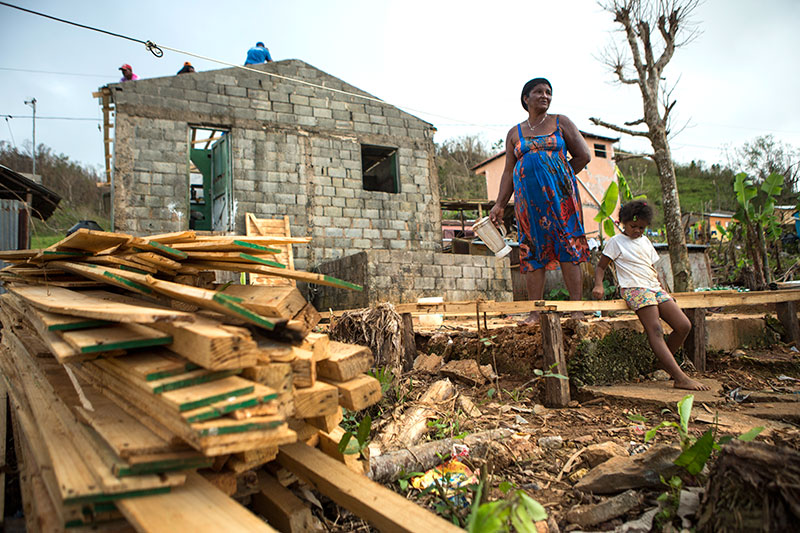 October 13th is the International Day for Disaster Reduction (IDDR), a global celebration of efforts to reduce disaster risk, and mitigate loss and damage from natural and man-made hazards. In Indonesia, however, there is not much to celebrate. The recent Sulawesi earthquake and tsunami claimed around 2,000 lives, with 5,000 more maybe missing. The event also triggered the displacement of at least 82,000 people.

This year marks three years since the adoption of the Sendai Framework for Disaster Risk Reduction, under which all Members States of the UN commit to “The substantial reduction of disaster risk and losses in lives, livelihoods and health and in the economic, physical, social, cultural and environmental assets of persons, businesses, communities and countries”.

The Framework spans fifteen years and has seven global targets, the third of which (Target C) is to significantly reduce the economic losses from disasters. Economic losses associated with damaged infrastructure or destroyed houses are commonly recognised. However, displacement, associated with almost every single larger disaster event, is rarely accounted for.

Since the Framework was agreed in 2015, 65.5 million new displacements associated with disasters were recorded across over 150 countries. If we were to add people displaced by drought, this number would increase significantly.  In 2018, mid-year figures published by the Internal Displacement Monitoring Centre (IDMC) highlighted that more than 700 disaster events have triggered new displacements in the first six months of the year alone.

These figures provide a conservative estimate of the scale, scope, and patterns of disaster displacement. Evidence suggests that such displacement may be of short duration, from a few days to a couple of weeks. Subject to the extent of the damage, people who moved pre-emptively tend to return quickly to their homes and are often able to resume their daily life. However, for an unknown yet potentially significant number of people, displacement may last for weeks, months or even years. In these situations, displacement can even become protracted, for example due to severe damage and destruction of housing and infrastructure, or permanent disruption of livelihoods.

This year, the International Day for Disaster Reduction highlights Target C of the Sendai Framework, which aims to reduce disaster economic losses in relation to global GDP by 2030. In recent years, the risk of economic loss associated with disasters has been recognised as a threat to sustainable development. Global economic loss risk is at an all-time high, as is the number of people at risk of being displaced. The theme of this year’s IDDR is therefore timely and important: reducing the economic losses from disasters will require a significant acceleration in global disaster risk reduction efforts. And this acceleration has to be informed by a much stronger understanding of these losses.

Economic losses in disasters can result from damaged critical infrastructure, housing and service facilities, destroyed agricultural land and crops, and other economic assets. These losses all come with a human cost such as death, disease, disrupted education and marginalisation. One significant cost that is repeatedly neglected is the displacement of people. When people are forced to flee in the face of a sudden-onset hazard such as a flood or earthquake, the resulting effects come at a high economic cost.  When they cannot return to their homes and lives after the event, these costs rise exponentially. Yet, to date, these direct and indirect costs are not well understood.

The magnitude of displacements detected and recorded by IDMC each year shows that the efforts of governments, the international community and civil society to respond to the needs of internally displaced people (IDPs) in the form of emergency humanitarian assistance are insufficient.  While effective response is indispensable, it does little to address the causes of displacement and prevent future crises. Preventive measures in the form of targeted disaster risk reduction for vulnerable communities in hazard-prone areas, based on disaster risk assessments that include displacement risk, are an important step. However, a more basic first step should be to start accounting for those already displaced, and to make sure we know where they are weeks, months and years after the disaster.

Displacement is both a major consequence and a driver of disaster risk. Last year, 18.8 million new displacements were recorded, with people forced to flee their homes as result of their exposure and vulnerability to a variety of hazards. The need to address the risk and impacts of disaster displacement is a priority. By accounting for disaster displacement and integrating an understanding of it in our infrastructure investments, socio-economic development planning and humanitarian response, we can build safer and more resilient communities.

Publication
Viet Nam is a role model for responding to climate displacement, but there are still lessons to be learned
Expert opinion
A perfect storm – when conflict and climate collide