The impact of Covid-19 on the Venezuelan displacement crisis 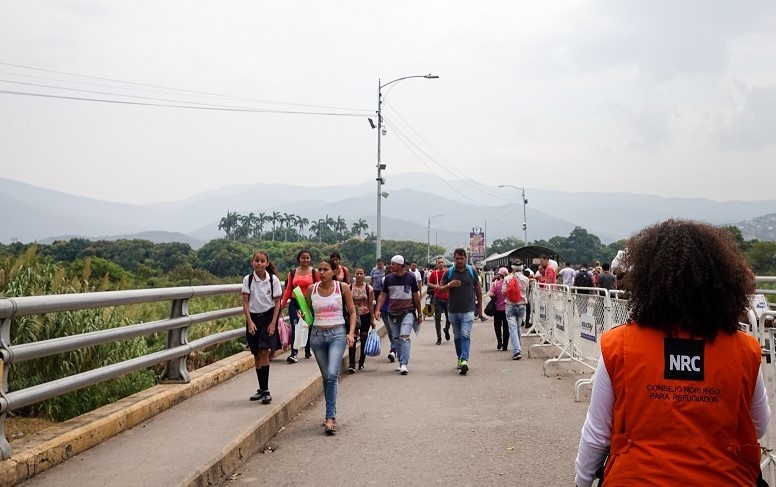 Venezuela’s political and humanitarian crisis has forced 5,095,000 Venezuelans to leave the country between 2014 and May 2020. This represents more than 17 per cent of the population and is the largest exodus in Latin America’s modern history. While there is no information available on internal displacement, the scale of cross-border movement and conditions inside the country suggest that a displacement crisis may be going unnoticed.

The Covid-19 pandemic adds a new layer of complexity to what was already a multidimensional crisis, as it will further exacerbate vulnerabilities in the country while simultaneously hindering people’s ability to flee or to leave the country, whether forced or in search for better opportunities.

Years of economic decline and political turmoil in Venezuela have led to a fragile state and culminated in a democratic and humanitarian crisis where an estimated seven million people are in need of aid.

High food prices have led to increasing levels of starvation as families need the equivalent value of 77 minimum salaries just to meet basic nutritional needs. Alongside an increase in undernourishment, diseases such as diphtheria, measles, malaria, tuberculosis and HIV have resurged recently. Lack of access to medicines and health services has also increased mortality rates and thousands have died due to a lack of supplies in hospitals. Access to water and electricity is irregular at best. Electricity blackouts have left, at times, millions of people without running water or telecommunications causing chaos in cities. Continuous access to water is only available to 17 per cent of Venezuelan households and to nine percent of hospitals.

Furthermore, in 2019 alone, there were 16,506 murders across Venezuela, with a homicide rate of 60.3 per 100,000. This made Venezuela the most violent country in Latin America, for the third consecutive year since 2017. In some areas, particularly those bordering Colombia, non-state armed groups including paramilitaries, criminal gangs and Colombian guerrillas use violence and intimidation to exercise tight control over the population.

The first two cases of coronavirus in Venezuela were confirmed on 13 March. The next day, Colombian President Ivan Duque ordered the border to be closed. An increase in cases led Venezuelan President Nicolás Maduro to announce a “collective social quarantine” extended countrywide on 16 March. It is unclear whether the comparatively low number of Covid-19 cases reported so far is accurate; however, the virus poses a serious threat in Venezuela as the population is acutely vulnerable.

The pandemic is having an impact on forced population movements of Venezuelans in and out of the country. Containment measures, such as the lockdown and border closure, and water, food and fuel shortages are accentuating the prevalent triggers of displacement, disrupting the patterns of displacement itself and increasing the challenges for displaced people. Furthermore, the pandemic is affecting the availability of data collection, both in Venezuela and worldwide.

Generalised violence and human rights violations have not ceased. A crumbling healthcare system, hyperinflation and food shortages have led President Maduro to rely on the state security apparatus to enforce social distancing practices. This has left police - and in some areas also criminal gangs - at the forefront of ensuring social control. Violence carried out by armed groups, paramilitary groups and criminal gangs has thus continued despite the lock down. Clashes between gangs during lock down have led to shootouts that lasted days in some of the poorest and most densely populated neighbours of Caracas.

Estimates of the number of homicides decreased during the first months of 2020, but there was an increase in the number of extrajudicial executions carried out by government security forces.

In other words, motives to flee have not changed since the coronavirus reached Venezuela. However, it is unclear the impact the Covid-19 pandemic will have on internal movements or cross-border flight given the current restrictions.

Patterns of displacement: no option to flee

Fleeing their home is often the last resort for families trying to protect themselves. Yet, the current conditions of widespread fuel shortage, hyperinflation, confinement and movement restrictions limit almost any possibility of doing so. The border closures imply that, when it is not safe in Venezuela, people will be forced to use illegal crossings, or trochas, and risk encountering the armed groups that control these routes. People fleeing clashes between armed groups, such as the confrontation in February between ELN and Rastrojos, will not be able to seek protection across the border. At the same time, the responses of neighbouring countries to the coronavirus further limit free movement and reduce the  options to find protection and access livelihoods or generate an income. As such, there is likely to be a reduction in cross-border movements from Venezuela to Colombia while restrictions and limitations on movements remain in place.

IDPs, refugees and many economic migrants are among the most vulnerable to the coronavirus given the conditions in which they live and work. The majority of IDPs and refugees in Latin America live in urban or border areas, with many in crowded spaces and with limited access to hygiene or health facilities. 80 per cent of Venezuelan refugees and asylum seekers have reported working without any contract with many depending on the informal economy. The disruption to this precarious informal economy has only increased the challenge they face to make ends meet and protect themselves from infection.

Those currently displaced inside Venezuela will face harsher conditions and will have very limited options to sustain livelihoods or flee elsewhere. Meanwhile, those abroad are having to consider returning home.

Colombia has seen the highest numbers of returning Venezuelans following the countrywide lock down that began on 25 March and has been extended until 31 May. This, and similar measures by other governments in Latin America, has had a direct impact on the informal economy, of which many Venezuelans abroad depend. Government figures in Colombia estimate that 56 per cent – or 1,025,000 – of the 1.8 million Venezuelans in the country are on an irregular status and depend on the informal economy. The nationwide lock down saw the informal sector grind to a halt and has forced Venezuelans abroad, in Colombia and across Latin America, to look for ways to return home. They are heading back on foot or by buses set up by local authorities. Estimates indicate that more than 23,000 Venezuelans have already returned since the various lockdown measures imposed due to the coronavirus. Many of them who had fled violence or persecution are likely to return to a situation of internal displacement.

Returnees that cross the border back into Venezuela are being sent to quarantine centres in unknown conditions. Paradoxically, the information from the Venezuelan side of the border about those returning is extremely limited. Humanitarian organisations have not yet been able to access the sites and only some testimonies are available.

Overall, the coronavirus has exacerbated the displacement crisis in Venezuela. The possibility of fleeing has been hindered due to restrictions on movement. At the same time, the existing causes and drivers of displacement have remained the same or become even more unavoidable, including state repression, the control of armed groups and generalised violence. Lastly, those who are already displaced now face starker conditions, both in terms of security but also their livelihoods, given the halt of the informal economy.

Projections of the migration flows had forecasted that, by the end of 2020, between 6.5 and 8.2 million Venezuelans will have fled the country. The coronavirus pandemic and the measures adopted will have an impact on this, however. The decrease in cross-border flight and a simultaneous  increase in returns of those who had previously fled abroad could mean an increase in internal displacement.

The lack of data and information on internal displacement in Venezuela seriously limits any comprehensive understanding of the true magnitude of the phenomenon and how to best prevent and respond to it. Furthermore, insufficient understanding threatens to condemn the situation in Venezuela to remain the most underfunded modern crisis as conditions continue to deteriorate.

A lack of information from the government demands joint efforts to cover these data gaps and generate pressure to ease restrictions on humanitarian aid. Local and international organisations, as well as donors, need to prioritise cooperation to capture and integrate datasets on the crisis and the mobility trends within Venezuela, both forced and voluntary, to paint a complete picture and ensure proper government acknowledgement, response and funding.

Find out more about the Venezuelan displacement crisis in our GRID 2020 spotlight here.