The people behind the dams, mines, riverfront ‘development’ projects

India is booming. Everywhere we went there was evidence of development, whether the establishment of a metro transport system in Cochin, the expansion of Jharkhand’s capital city Ranchi, or the construction of new housing blocks on the outskirts of New Delhi.

India, therefore, was a good starting point for IDMC to examine some of the conceptual, analytical and methodological issues that are at the heart of expanding our monitoring of this global phenomenon.

Who did we talk to?

We met people in urban and rural areas displaced  by a dam, an iron-ore mine, canal widening and riverfront beautification projects, a ‘Smart City’,  a shipping container terminal, and construction for the 2010 Commonwealth Games. And, this is just the tip of the iceberg.

No matter what project displaced them, most displaced we met with knew their rights and entitlements. But the power imbalance they were up against in demanding their rights was glaring.

The IDMC team also met with NGOs and academics working on the issue, whose expertise and dedication was impressive and inspiring. One activist we met was imprisoned last autumn for two months for defending the rights of the displaced, and many NGOs and academics mentioned others who had been similarly targeted. 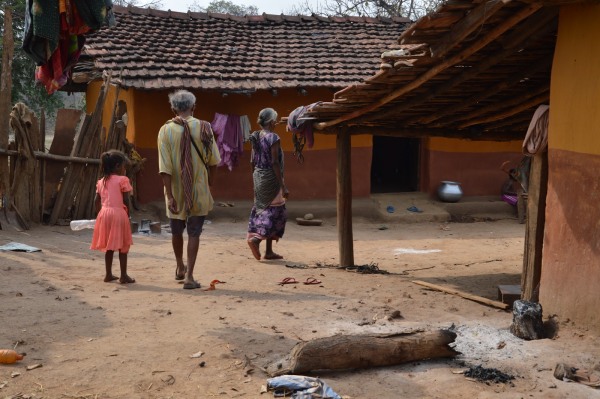 Tribal villagers in Jharkhand displaced by the expansion of a TATA Steel iron ore mine in the Noamundi area. Displaced some 30 to 40 years ago, they have still not received any compensation or other assistance despite appeals to TATA Steel and a 22-year unresolved court case. (Photo: IDMC, March 2016)

So, what did we learn?

‘One fine day my house was bulldozed,’ said a woman displaced from a slum in New Delhi for land acquisitions and urban beautification in preparation for the 2010 Commonwealth Games.

Indeed, despite development projects often being in the pipeline for years before they commence, this does not always transpire to adequate notice for those who will be displaced. In Cochin and New Delhi, some families we met with were mid-cooking when bulldozers arrived to raze their houses.

Larger projects, such as the Chandil Dam in Jharkhand took over a decade to construct and another decade to reach capacity. Here, families had time to mentally and otherwise prepare for their relocation, though it took years of struggle for the over 12,000 people displaced to be resettled and receive compensation for their lost land and houses.

‘We have these structures, but not much else,’ lamented Pathmakshy, a woman aged 42, displaced from a slum by a canal widening project in Cochin, Kerala.

This woman was most concerned about the lack of livelihoods at her new place of residence, as were the vast majority of IDPs we met with. Adequate housing is more than shelter that protects from the elements. It should also be in a location that allows one to earn an income.

In New Delhi, for example, IDPs resettled over 30 kilometres away to the periphery explained that some displaced women commute 3-hours one-way to keep their jobs as domestic workers at their original area of residence. Other IDPs had given up their work as daily labourers since the cost of the commute consumed all earnings. These IDPs also told us that some of the unemployed IDPs had taken up gambling and alcohol in the new area.

Rice paddy farmers in Noamundi in Jharkhand displaced by an iron-ore mine expansion over 30 years ago had lost both their home and livelihood and were only barely surviving by selling leaves, firewood and rice beer.

‘The end of the project is not the end of displacement,’ explained a professor at the Centre for Social Development in New Delhi.

Despite the fact that the issues linked to displacement extend beyond the physical relocation of the displaced, the World Bank admitted to IDMC it does not monitor communities displaced by its projects once their project completion report is handed in. But it is not only the World Bank.

NGOs and academics told us that neither the government nor the private sector collects data on people displaced by their projects after the project is completed. Only NGOs and academics hold such data on specific cases they work on. The paucity of data is ironic given the ubiquity of development projects in the country.

Any assistance or remedies that the displaced managed to receive was thanks to their own efforts or those of civil society. Both the authorities and the private sector need to do much more to live up to their obligations to those displaced by development projects.

The Special Rapporteur echoed IDMC’s concerns: “[the government’s] drive to become an economic giant through real estate investment and development of infrastructure is in fact creating homelessness and housing disadvantage. It becomes a zero-sum game: for every luxury unit created, an untold number of households may be evicted and rendered homeless”.

Indeed, there is a need for all levels of government in India to respect and protect the rights of their citizens and ensure better safeguards for those displaced by development projects. This will contribute to decreasing inequality rather than increasing it.

This summer IDMC will issue a report on its mission to India that will include comprehensive findings and targeted recommendations. This is IDMC’s first major step in establishing a formal area of work on development-caused displacement that will include data collection, research, analysis and policy influencing, which will expand our existing work on displacement due to conflict and disasters.