History threatens to repeat itself: the risk of a regional spill over

According to IDMC analysis, the scale of the internal displacement crisis in the Central African Republic (CAR) is at its highest since IDMC began monitoring the country in 2003. More than 390,000 people in CAR are currently internally displaced; almost twice the numbers reported during the height of previous CAR instability between 2006-2008.

Today, estimates suggest that a staggering 10 per cent of the population of CAR has been forced to flee since the Séléka movement overthrew the former President Bozizé and his regime in March. This places CAR on par with Colombia, the country with the largest internally displaced population worldwide, with 11 per cent of Colombians living as internally displaced people (IDPs).

In a context of general lawlessness and impunity, the still-armed former members of the dissolved rebel group, Séléka, have been a main driver for insecurity and violence for CAR civilians. Many of the fighters have not been paid for weeks or months and prey on civilians to loot their belongings. Rape and forced marriages, along with recruitment of children by all armed actors, are on the rise.

As the violence spreads, the crisis risks becoming regionalised.

Conflict in CAR has historically been intrinsically linked to instability in neighbouring countries, particularly in and between Chad and Sudan, both of which have supported oppositional armed groups and coups in CAR in the past. Recent reports that both Chadian and Sudanese nationals are found fighting in CAR, along with current reports of refugees arriving in CAR from the war-torn Darfur region of Sudan, suggest there is a risk that armed groups on either side of the border might take advantage of the current situation to further fuel conflict. 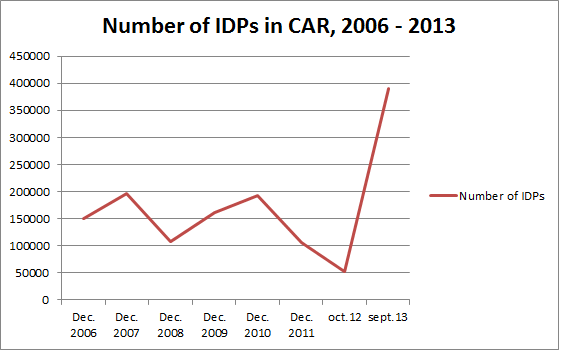 Migration patterns in the east of the country have historically provided a further source of tension. Traditional routes for pastoralists from and to Chad, Sudan, South Sudan and the Democratic Republic of Congo (DRC) through the east and north of CAR have, in some areas, caused clashes between locals and pastoralists resulting in internal displacement. Recent reports claim that such pastoralist groups have sided with Séléka and attacked civilians. This raises concerns that armed groups could exploit these inter-communal tensions to further fuel instability for their own benefit, in a way that would mirror conflict and displacement dynamics in Darfur.

To the West of the country, Cameroon and Congo-Brazzaville initially appear to be serving as a buffer from the conflict dynamics in the Sahel areas of north-east Nigeria and Mali. However, as during the 2006-2008 instability, it is the north-west of CAR that is believed to have been hardest hit by violence and internal displacement in recent past weeks. If history were to repeat itself, criminal gangs coming from as far as Niger and Nigeria would take advantage of both the instability and the porous borders to target civilians in CAR, potentially causing massive displacement.

To make matters more complicated, rising tensions between the Christians and the Muslims in CAR are further cause for alarm. The widespread perception that Séléka is targeting Christian household for looting is apparently being exploited by various armed groups in order to fuel religious tensions for their benefit.

Ultimately , an escalation in the regionalisation of the conflict dynamics in CAR would make the current situation even more complex and raise the risk of a protracted conflict, forcing more people to flee and preventing IDPs who wish to return to their homes from doing so any time soon.

Without real international engagement, the crisis can only deepen

In a country with widespread poverty already poorly supported by public services, IDPs in CAR face a dire humanitarian situation, especially in terms of access to health services, water, food and shelter. Worryingly, health care is believed to be the biggest challenge; outside of the capital of Bangui, virtually no medical professionals other than humanitarian staff are present.

The challenge of getting aid and assistance to the people that need it as well as a lack of sufficient funding are the two key issues. Humanitarians are struggling in the face of limited resources and widespread threats to their security, with reports of direct attacks on aid staff. During the fighting in March, many agencies’ operations were crippled by lootings of offices and warehouses. In addition, many humanitarian staff were evacuated during the violence.

Although the EU has increased its funding to the crisis in CAR by 150 per cent, the financial needs that humanitarian organisations remain largely unmet, with only 39 per cent of activities being funded as of early October. Despite the considerable needs and concerns, only 5 per cent of available funding is going to protection programmes.

The increasingly complex crisis in CAR is not going to disappear. And without any real international engagement, it can only get worse. As the UN Security Council discusses CAR this week, it is crucial that the international community keeps in mind the immediate need for stronger protection and assistance to IDPs caught up in the instability both in CAR, and its neighbouring countries in the region.